Today the world was supposed to end (after it failed to do so May 21st. Remember that one?)
It just crashed a little.
The day started out okay. I read about a ceremony to honour a tree and I thought I would head on over and maybe get a good post out of it to share with you all. 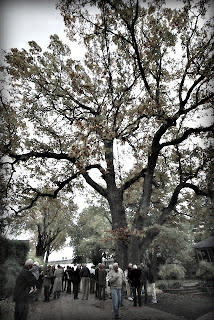 The tree is 300 years old, which is impressive enough by itself. It sits on the edge of a short road and at one time was a boundary marker between the villages of Burlington and Aldershot. This is a majestic white oak that stands about 30 metres (98') high and has a 50 cm (19") girth. And now it has a plaque honouring it as possibly the oldest and largest white oak in the country. 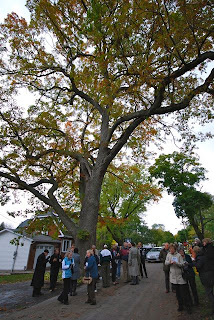 The ceremony was fine, though it was a small crowd who gathered because, well, it was at 2pm and wasn't announced to the public except for an article in this morning's paper. And most people probably aren't all that interested in a ceremony about a plaque for a tree. There would have been a far larger crowd had anyone suggested chopping it down, I'm sure. But the Mayor was there to give a speech, also the local alderman and the town's arborist (all, incidentally named Rick - much joking over that ensued) They were flanked by speeches from two Janes - one from the historical society and the other the new MP at her first official public event. There was apple cider and delicious oak leaf shaped cookies afterwards. 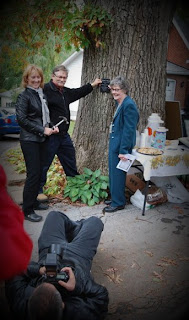 Some people went to extremes to get a good shot.

Some people decided to change lenses.
And dropped the newest one.

Now, if you'll excuse me, I am going off to have a little cry.
Posted by VioletSky

Labels: a long journey, at least I got one good picture, local lore, photography