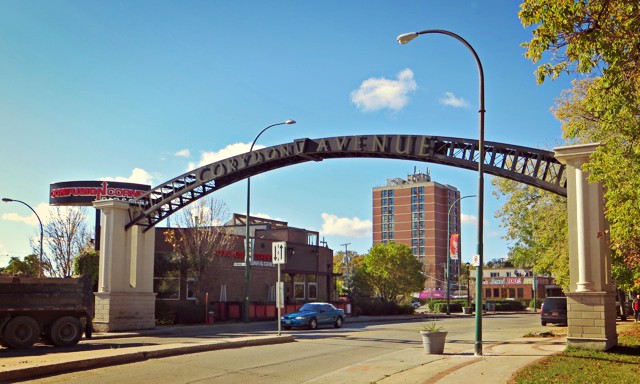 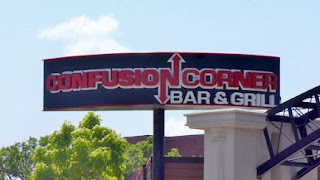 and what is known as Confusion Corner.

After driving down it several times by bus and car on my way to and from downtown Winnipeg, I chose a (too sunny) morning to walk and capture the sights of the street at the Confusion Corner end that is known as Little Italy. 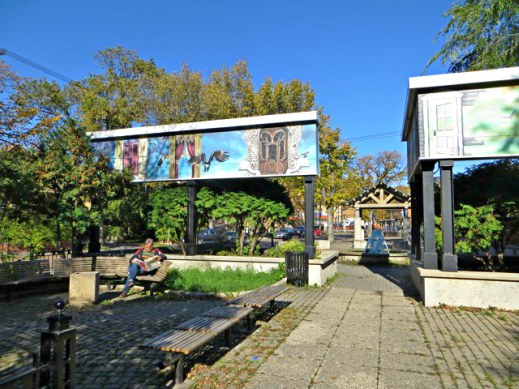 It was pretty quiet at 10am, but I found at least one other person enjoying the nice weather 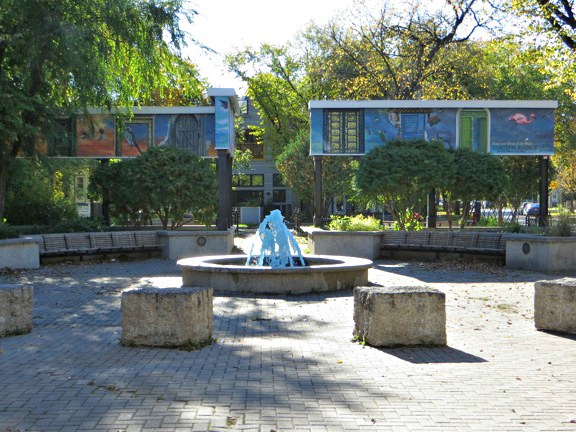 There are many restaurants, though not all with such decorative patios

or decorative rear walls by the garbage bins 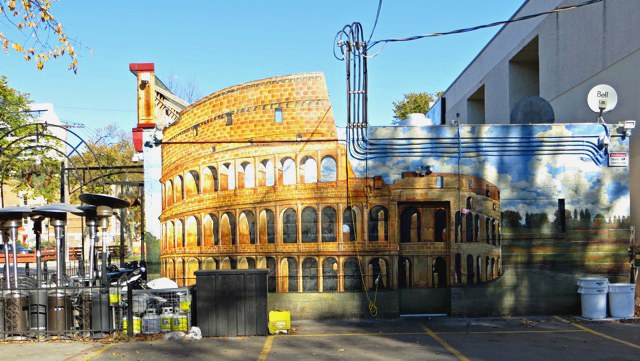 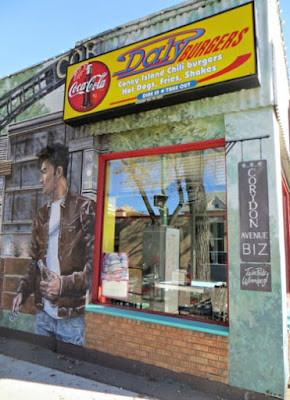 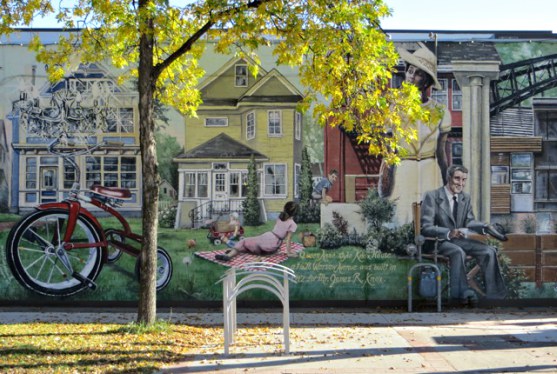 Down some of the side streets, the homes look this 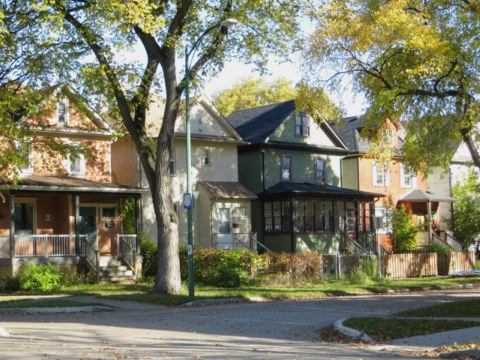 with many mature trees 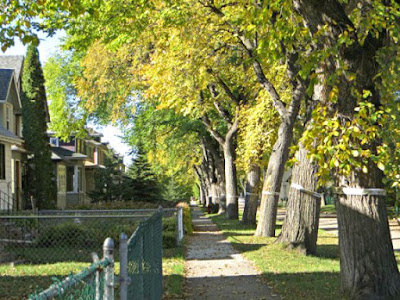 the band on these trees are to protect against cankerworms. I saw many, many trees with these bands. Cankerworms cause a lot of damage in Winnipeg and really like American Elm, Manitoba Maple and fruit trees. 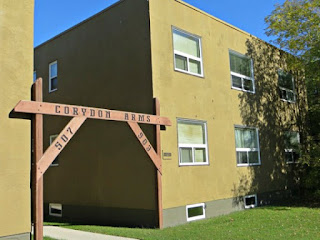 But on Corydon itself, many homes were lowrise apartment buildings with little character

though at least this one was getting a facelift 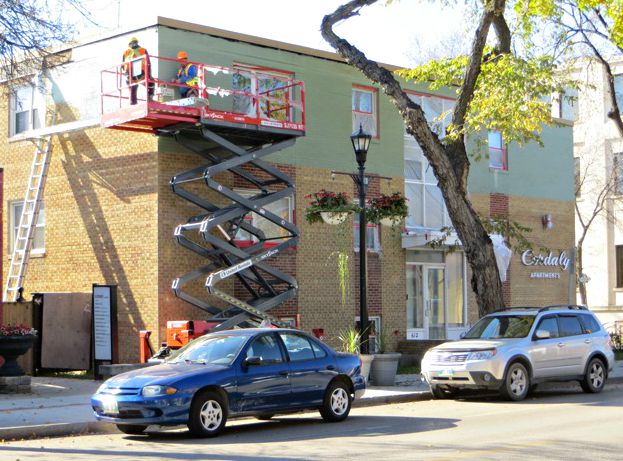 and this one has a few grand ideas 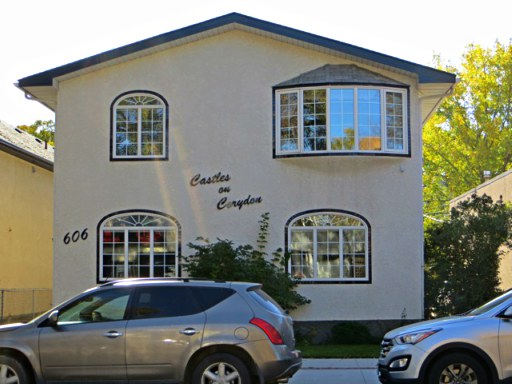 Scattered around, were these sculptures with painted images representing different countries. After I got home and did some research, I see I missed quite a few of them as according to the website there are eight  to be found. I was really disappointed in myself for not seeing them. If you want you can see the others here. This one is Argentina
on the left is Spain, and the right, France 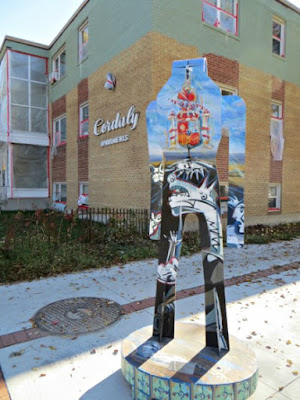 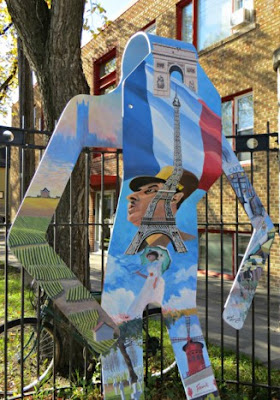 some business had rather unusual names... 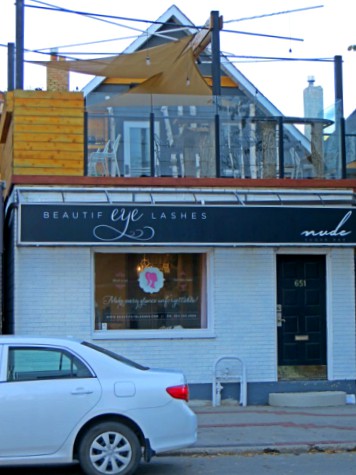 and unusual canopies on the rooftop patios 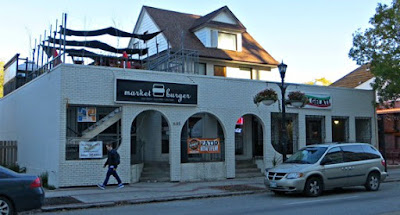 Before I set out on my walk, I had high hopes of sitting on one of those patios with a coffee or latte, but  after commenting at one store that was open about how quiet it was on the street, I was told that none of the restaurants opened until dinner time. Sure enough, on a ride down the street in the evening, the place was hopping with people! 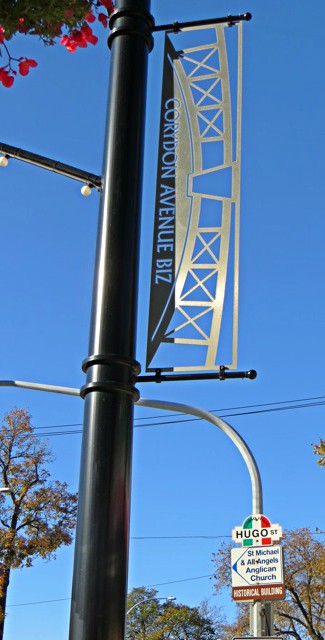 another urban walk for Jo's Monday Walks
with a few signs thrown in for Lesley's signs, signs
and some murals for Monday Murals