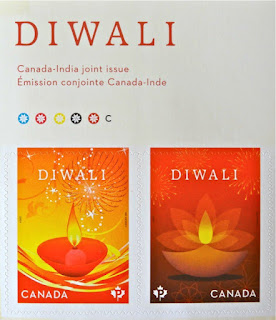 Diwali - the Festival of Light - will be held from October 19 - 23. Its main theme is triumph of light over darkness. The main festival night coincides with the Hindu new year during the dark night of the new moon in the month of Karttika (October-November) Traditionally there are fireworks, and small clay oil lamps are lit (in India) and candles are lit (in Canada). This can be seen in the stamps with the Indian issue on the left and the Canadian one on the right.


The festival is also celebrated by Sikhs, Buddhists and Jains.
The only times that fireworks are allowed on residential property is Victoria Day, Canada Day, New Year's Eve and Diwali. Three years ago, on Diwali night, there was a massive fire that destroyed two homes and caused extensive damage to neighbouring homes in a community near me and the cause was determined to be improper use of fireworks.

Canada Post is hailing this as an historic first ever joint issue with India and both countries are issuing each version.

Join us for more stamps at Sunday Stamps
Posted by VioletSky