Knitters are an unusual breed. They are compulsive, with a need to constantly have a project on the go. And it often goes with them - on the bus, to meetings, lunch hours in the park, monthly 'stitch 'n bitch gatherings with like minded friends... It was virtually guaranteed that every member of our (albeit tiny) family would get a knitted sweater for Christmas. When that became too much for our bodies and closests to handle, we all got afghans. Many, many afghans and sweaters have passed through my mother's hands. She was occasionally reduced to begging, "would any of your friends like a pillow cover or pot holder I could make for them?", "she's having a baby? oh good, I'll find a nice pattern, in green or yellow, just in case". A donation or two was made for the annual church bazaar. I was at a younger friend's house a few months ago, and in her loo, prominently on display - and for use, I guess - sat a knitted toilet paper roll cover. A washroom seemed as good a place as any to have a little laugh and cry at the memory of it all. Didn't we all have one of those hats, or sometimes a doll with a very large skirt to daintily cover the toilet rolls? I hated them when I was living at home, but at that moment I rather wished I had a nice one to remind me of my mother. Hannah thinks they are hilarious and wants a collection for her washroom. But, like me, she is not a knitter. Church bazaar. There's sure to be some old lady still making them!

So, when Sue Sturdy, an fibre artist who is now artist-in-residence at the Cambridge Centre for the Arts decided on an outdoor art installation, she wanted something that was special and spoke to the origins of the textile industry and the woolen mills that made the area prosper in the 19th and early 20th century. So, in the the city of Galt in Cambridge, near the old ruins of the mill race on the Main St Bridge 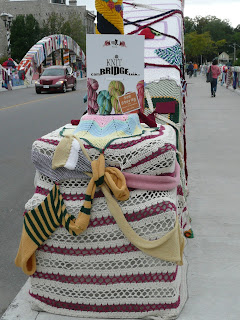 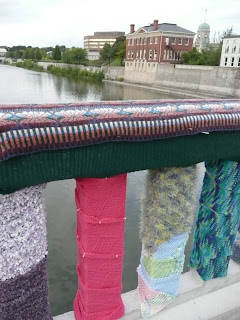 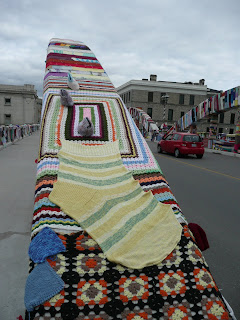 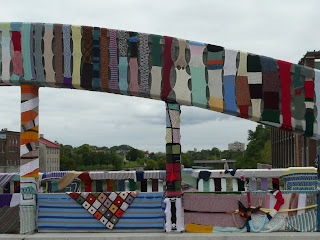 this is an original dress from the 60s that was donated 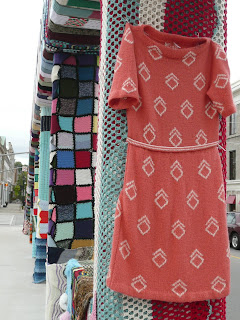 and thousands of people have wandered into downtown Galt to admire and exclaim and meet people (though, on this particular day it was relatively quiet, but still, everyone you passed had a word of admiration and awe) 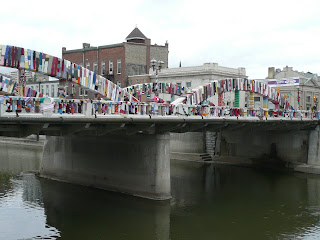 On the day I went, I had a chance to meet Sue Sturdy who was walking the bridge and talking enthusiastically about the the various pieces. So many stories. Some were made specifically for this installation, some were donated. All will be taken down on Sept 27th and later laundered and refashioned to be donated to charities. 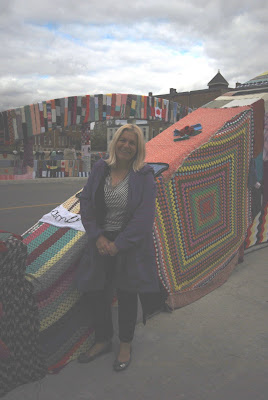 It seems I still have to learn how to use my Nikon. Sadly all my photos from that camera were shite.
Posted by VioletSky

Labels: dressing up, where I live