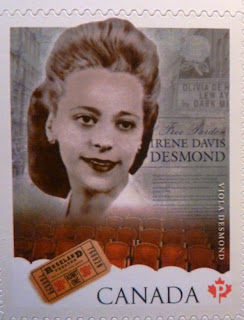 First up is Viola Desmond, who was born in 1914 in Halifax. With her husband, they travelled the province expanding their businesses of barbershop and hairdressing salons. One day in 1946 when she developed car trouble in New Glasgow, she decided to go to the movies while it was being repaired. She bought her ticket and took a seat on the main floor unaware that, in New Glasgow, tickets sold to blacks were for the balcony only and the floor was reserved for whites. She refused to go to the balcony and eventually the police were called and she spent the night in jail. She was charged with defrauding the Government of Nova Scotia the difference in tax between a ground floor and balcony seat, which amounted to one cent. She was also fined $20, which she paid, but she decided to fight the tax evasion charge. No-one admitted that the theatre had a racist seating policy and that Viola was black. In 2010, a posthumous pardon was granted to Viola Desmond, the first ever such pardon granted in Canada, and the Government of Nova Scotia made an official apology. 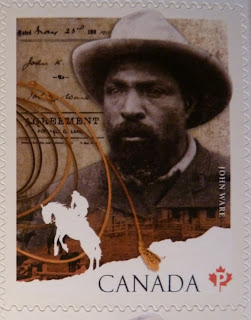 Second, we have John Ware, whose story I was less familiar with. He was born into slavery in South Carolina around 1845. After the Civil War, he headed out west where he learned the skills of a rancher and became a cowboy. He worked his way up to Calgary and brought with him 3,000 head of cattle as part of the North West Cattle Company - and stayed, thus helping to create the province's important ranching industry. Known for his strength and ability to ride, plus his skill with a lariat, he popularized steer wrestling which would go on to become one of the highlights of the Calgary Stampede. He defied stereotypes and became one of the most respected figures in frontier Alberta crossing race lines thanks to his good nature and hard work. His funeral in 1905 was reported to be one of the largest held in the early days of Calgary.


Check out Viridian's Stamp Blog to see what other storied stamps are on offer.

P.S. I ran out to buy these stamps for this post - I really just wanted one stamp of each, but in the confusion of the other international stamps, and GST etc, I have a booklet of ten each. If anyone wants one let me know.
Posted by VioletSky