There has been great anticipation all week. The world's largest flower was about to bloom! There are two Amorphophallus Titanum (aka Corpse Flower) or Titan Arum for short, in the Niagara Greenhouse that is now known as Niagara Floral Showhouse. Every day since Monday last week, the staff tried to give an estimate of when it possibly might open.

As in all things natural, it is not as predictable as one might wish. So, with a day off on Wednesday, I headed off down the peninsula to Niagara Falls to have a look because I thought I wouldn't have time to go back until next Monday and by then it might be too late. This thing only blooms for a couple of days once it has opened. It also grows by inches every day and was, as of Wednesday, up to 93.5" - that is 8'!!

Sadly, it was showing no signs of opening when I got there. They started charging an entrance fee in March but it was only $5 and for an extra $5 you got a seasons pass, so I thought that seemed a good deal, and I may just want to go back..... 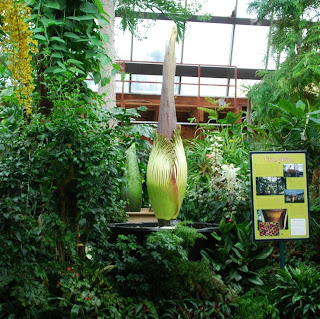 The plant is exceedingly rare and this one will be only the 22nd to ever bloom in a greenhouse. Apparently they can be dormant for years and years without blooming. And since they are indigenous to Sumatra are not widely seen by many people. The two bulb like structures, called corms, were donated to the Niagara Parks Commission by someone in New Hampshire and each weighed 150kg.

Then, by Friday, the smaller of the two plants had a sudden growth spurt and grew a staggering 6 inches after a 5 inch growth the day before 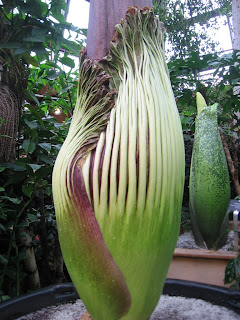 The greenhouse has extended its hours to 9:30 PM in honour of the blooming, to accommodate as many people as possible who wish to see it.

Then, just in time for the weekend, and around 10PM on Friday night it opened! 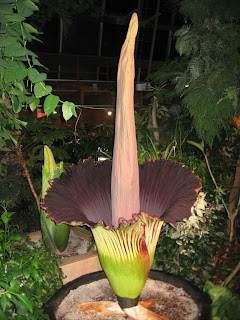 The smell, which has been described as like rotting meat, is apparently at its worst during the first few hours. So most people - including the poor staff at the front desk - will miss that rare peculiarity.

Maybe I will be able to catch the second flowering.