Water towers just didn't seem exciting enough to take a photo of (at least the ones here seem boring to me, maybe once I see some of the others, I'll change my mind) and if this is to be a challenge then a silo would be more challenging. Definitely.

I was working for a friend last night and part of his route is in an area where there is still some farming. I'd only ever been up that way in the dark, so I rearranged the deliveries to do that area later, when the sun had risen. I got up to Burnhamthorpe Rd and looked left, then right, then off in the middle distance - not a silo in sight. There were barns and stables. I even saw some horses and cows in a field and to my delight, a chicken! Chickens still make me smile, so I grabbed a photo of a chicken dancing in the driveway and wondered why this farm did not have a silo.

Then on my second last stop before crossing the border back into the urban part of town I found one trying to hide.
And because I missed a previous week's theme with hydro wires getting in the way of a good photo, I got a twofer: 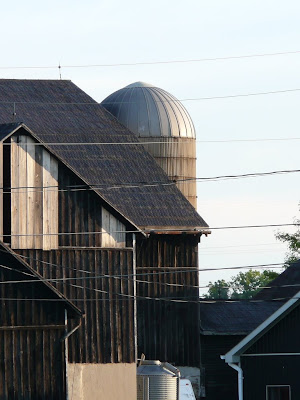 Then, off in the far distance, about a kilometre down the road, I caught sight of some monstrosity. I drove around to get a better view, then closer to try to get a close up but the angles and elevation were all wrong.

Somewhere in this mess over the hill is a maybe a silo? 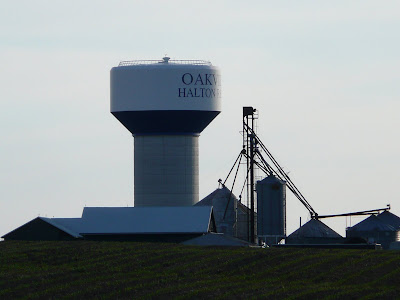 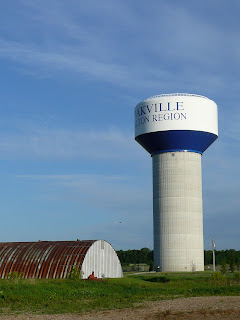 The watertower looks much closer to the farm property in the above photo.
And, because of all this exta driving around I did, I was a bit later than usual finishing. But that was good, as then the bakery would be open to buy some fresh bread and maybe a danish to go with the free coffee they offer as a treat. My heart skipped a beat when I drove past and saw a tent in the parking lot ... yes, a BBQ! I paid for three raffle tickets and bought a peameal bacon on a bun to aid MS.

All in all my Sunday has been good so far.
See how sunny it was at 7:10am?
Hope everyone else is enjoying their Sunday.

Labels: a lovely day to be outside, driving around the countryside when I should be working, photography, Sunday Stills