What a week.
It started off well. My holidays were booked, which is an event in itself not least because I have never booked a holiday so far in advance before. It is not until June, so there is plenty of time to tell you about it, which I promise to do. I had just bought myself a new camera lens and spent way more than I had originally wanted to spend on it, but it had so many more features that I knew I would be unhappy to not have and if I wanted them, then I had to spend the $$$. But that was okay. The timing for my credit card was perfect as it is not due for another month and I was suddenly busy with work so I could hopefully make all the extra money I needed with my clients who I would encourage to keep booking appointments instead of letting them get away with saying "I'll call you".

I was feeling confident. My notice of rent increase wasn't as high as I feared (yay!) and the price of gas has been slowly going down by almost 1 cent each each day. I even decided to save more money by not eating out as often and giving up on coffee unless I made it at home. It was going well until yesterday. I had too much time between appointments so did some grocery shopping then decided I would wait out the next 40 minutes or so having a coffee.

When I came out, the bumper of my car was lying on the ground.

How this could happen is beyond me. How could someone do that and not leave a note - not even an apology with no contact name or number. Or a note from someone who must have seen, or heard, something who could have written down the hit and run's license number. Nothing. Stupidly, I stood there looking at my car, looking around, then back at my car. Maybe if I did that often enough, I would see it was all a mistake and this was not really my car. Or I had imagined the whole thing. Please, couldn't it all have been some bad imagination?

Miraculously, the bumper has barely any scratches on it. The license plate is dented in one corner. But the whole thing was sheared off the car and attached by one small section on one side. I still have trouble figuring out how it was done. Anyway, it is tied back onto the car and looks a bit odd. My car with the odd personality.

Good thing I have that holiday in June. By then I may have gotten over this.

But, wanting to find something good I have some news. 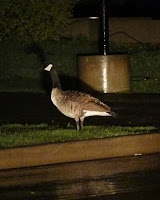 Look who it is!

Still on his lonesome.