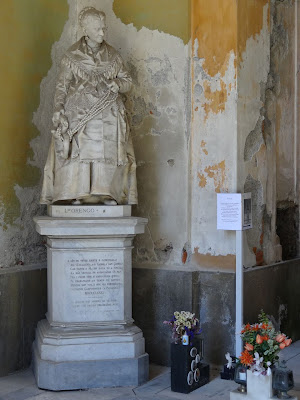 Caterina Campodonico was born in 1804 as a strong willed peasant who spent her life traveling far and wide selling her homemade reste - necklaces made of nuts (sometimes translated as hazelnuts or chestnuts or peanuts) and breads. She was judged as too independent by her family and when she became ill in 1880 instead of helping to care for her were already arguing about how to distribute her wealth (which they did not believe was solely from selling her breads and nuts). However she defied them by living and then, using the money she had been saving, commissioning the most prominent sculptor of the time as well as a popular poet to create her monument.

"By selling necklaces of nuts and sweets at the Sanctuaries of Acquasanta, Garbo and St. Cipriasso, defying wind, sun and water coming down in buckets, in order to provide an honest loaf for my old age; among the little money laid by myself to the furthest ends of time, with this monument, which I Caterina Campodonico (called the Peasant) an authentic inhabitant of Portoria, have erected while still alive. 1881. Oh, you who pass close to this, my tomb, if you will, pray for my peace." 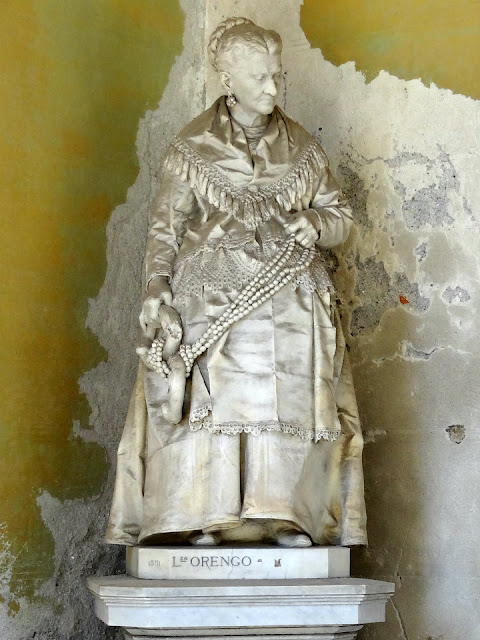 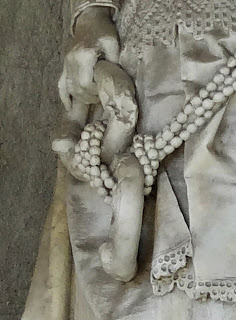 Caterina chose the famed Lorenzo Orengo as he was the best sculptor among the Genoese bourgeoisie.

Just as many of the entrepreneurs and professionals had the symbols of their wealth, Caterina made sure she was wearing the traditional garb of the hawker and is seen with the objects of her trade - a necklace of nuts with twisted loaves of bread.

It is said that she used to delight in standing beside herself in her traditional skirt and apron with the fringed shawl for the Genoese who flocked to see her marble monument.

On July 7th 1882, Caterina died and there was a long procession following her to the Staglieno Cemetery from the church of Santo Stefano.

Her statue has become the most recognized in the cemetery "which more than any other has a place in the collective memory and imagination".