The Hendrie family were fabulously wealthy. In fact, the people of Hamilton were fascinated to discover upon William Hendrie's death in 1906 at age 75, that his estate was worth 2.3 million (although there were many debts and taxes owing). Railways created Hendrie’s business, and cartage, contracting, manufacturing, and rail promotion ultimately involved him in the production of structural iron and steel for which Hamilton has been well known. He was also a sportsman who loved horses and horse racing and he passed on this love to at least one of his four sons, George.  Horsebreeding grew out of his cartage business and William bred and sold horses  (saddle and road and carriage) and would eventually contribute to the forming of the Ontario Jockey Club. In 1931 (perhaps coinicidentally, perhaps not, a hundred years after the birth of his father) George would donate the family's Valley Farm to the City of Hamilton and it would later become a part of the Royal Botanical Gardens. (You can read about the Hendrie Valley Trail here). There is a usual family monument (left) with separate flat stones surrounding the plot for various family members. The stone for George Muir Hendrie, however is not so usual. 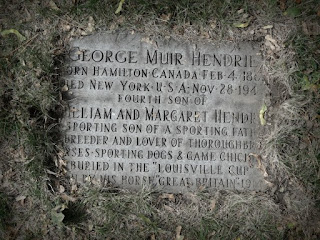 
I am not sure which is more shocking, the 'game chickens' or that he was buried in the cup won by his beloved horse. I am also not sure what he was doing in New York in 1942.

The family is buried in the Hamilton Cemetery that borders the Royal Botanical Gardens but, if you were to visit Hendrie Park and walked through these ornate gates 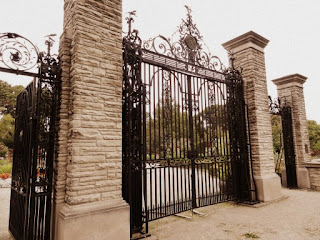 past the fountain you will find a plaque 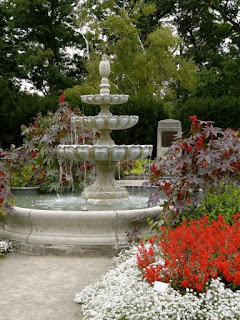 honouring the donation of the park 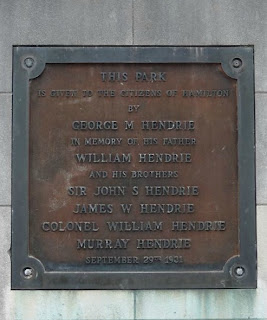 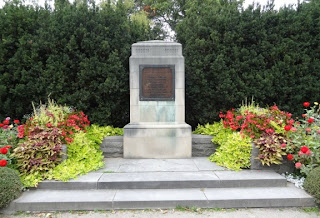 and if you continued and walked around behind this tall hedge...

you will find another grave site 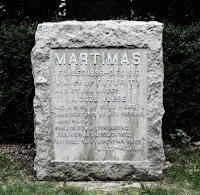 Foaled 1896 - Dies 1916
Winner of FUTURITY
and other races
A GOOD HORSE
and a sire of good horses
"dumb creatures we have
cherished here below
shall give us joyous greeting
when we pass the golden gate
is it folly that I hope it may be so?"
~Whyte-Melville