It was an odd sort of day yesterday. It had started in a pale, soft misty slightly out of focus way, the views reminiscent of those pink-ish hued pictures from the 80s. Around 2pm I headed out to the market (so I could be first in line for the pie and soup stall) taking only my small point and shoot camera since I figured there would not be much to see in the overcast sky and fog. There is, between the green where the market is held and the church, a cemetery I wanted to explore and I thought the lack of sun would be beneficial. Then, magically, as I drove up the escarpment (or The Mountain as the locals call it) the sky turned a brilliant blue and the sun shone and it became 20 degrees warmer. Maybe a little less, but it was a significant change. The pavement and the grass was so damp however that I thought it must have rained there earlier, though I found out it hadn't. I wandered around the cemetery for a bit, until my feet were soaked and cold from the dew, then had a refreshing pint at a secluded patio with the sun beating down on my car with all those frozen pies in it. Then I headed home. Down the mountain, admiring the fall colours that we were warned may not be spectacular because of the long, dry, hot summer. (There really should be some safe spots to pull over for photographers, because the best views are often from the highway). Down into the distant fog. By the time I got to the lake it looked like this 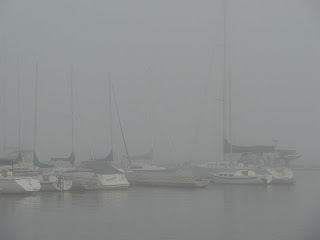 there is a big bridge beyond these boats

The thick fog had stuck around parts of the city that were not Ancaster. Or, as the Spectator enthusiastically reported: "...fog slowly slithered into town Wednesday, throwing an increasingly thick and slick blanket of damp air across the city. While there may have been some irritated by the lack of sunlight or the amount of moisture in the suddenly thick air, for the visually inclined it was a delight." Apparently, this was a result of something called advection. I had to look it up, because the newspaper didn't bother to fully explain. It means:

Advection fog Fog which forms in the lower part of a warm moist air mass moving over a colder surface (land or water).

There you are. Your word of the day.

Labels: driving around the countryside when I should be working, weather is drama