The front of this card I find a little bland, a little ... grey. It shows the 'coveted cup' named after the 4th Earl Grey, and Governor General of Canada from 1904-1911 who commissioned the trophy in 1909.
The Grey Cup is both the name of the trophy and the championship game
(between the winners of the east and west division playoffs) 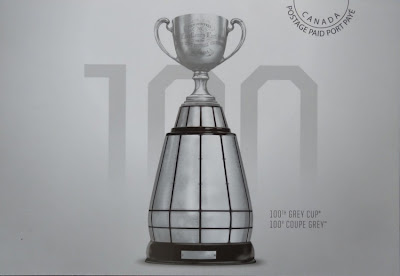 The trophy has a silver chalice attached to a large base on which the names of all winning teams, players and executives are engraved. In 1947 a fire destroyed the clubhouse of the Toronto Argonaut Rowing Club and many of the trophies and artifacts in the clubhouse melted or were damaged beyond repair but the Grey Cup survived by catching onto a nail when the shelf upon which it sat collapsed. The trophy has been broken on four other occasions: in 1978, when it was dropped by celebrating Edmonton Eskimos players; in 1987, when an Eskimos player sat on it; in 1993, when another Eskimos player head-butted it; and finally in 2006, when the trophy broke away from its base as the BC Lions celebrated their victory. The CFL commissioned a replica of the trophy in 2008.

After the 2012 Grey Cup game the trophy will run out of room for any more names and the base will be redesigned but will remain similar in shape to its current design.
This prepaid card features the Grey Cup on one side and the stamp shows the Cup with two players showing old and new uniforms. 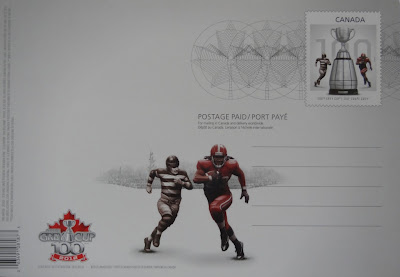 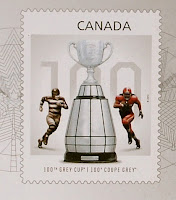 The One Hundredth Grey Cup will be played this afternoon in Toronto, which may seem an odd choice as Toronto is not exactly a football loving town. But the first Grey Cup was held in TO. There have been weeklong festivities celebrating this 100th anniversary. And the fact that the Toronto Argonauts will be playing at home against the Calgary Stampeders is extra sweet for those who care about such things.

update: the Toronto Argonauts won and the cup was once again broken.
this time one of the handle was broken off during the celebrations.
Posted by VioletSky