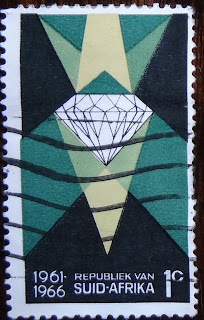 I couldn't believe how few geological themed stamps I have in my collection for this week's Sunday Stamps.
I was about to admit defeat and just post a picture of a volcano, which I was sure would be featured on a Japanese stamp somewhere, when I stumbled upon this stamp from South Africa.
It was one of a series of three issued in 1966 to commemorate the 5th anniversary of RSA.
(I also have another one that is written in English, but this Africaans one has the least smudged cancellation mark)


Diamonds are close enough, I thought....

The discovery of diamonds in 1866 and their large-scale exploitation beginning in 1870, in the Kimberley area, initiated the transformation of South Africa from an agriculture-based economy to a mining- and industry-based one. The diamond rush, which made South Africa the world’s dominant producer of diamonds for 70 years, established a local need for technology and specialized equipment, thereby triggering the development of supporting industries, while the money it generated created the first pool of capital in the country.

South Africa continues to produce significant quantities of mainly high-quality gem diamonds annually, and it ranks fifth overall in terms of world production. SA is the only country in the world where diamonds are extracted from both kimberlite pipes and dykes or fissures, as well as from both onshore and offshore (marine) alluvial deposits.