For this first week of Sunday Stamps in the new year we have something black
and what could be more appropriate than the Penny Black.
While I don't have an original, I do have two commemoratives, one from 1966, the other from 1970. 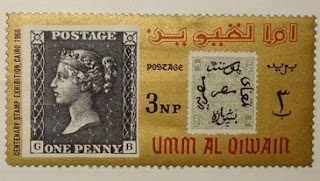 The first was issued for the Centenary Stamp Exhibition Cairo for the 100th anniversary of the first Egyptian stamps
Umm al Qiwain is one of the territories in the UAE. it was a British protectorate as of January 8th, 1820 and in 1971 joined its neighbours Abu Dhabi, Dubai, Sharjah, Ajman and Fujairah in forming the United Arab Emirates. 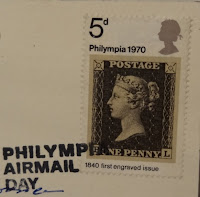 The Penny Black was issued in May of 1840 as possibly the first adhesive postage stamp. This is significant in that it indicated a prepayment from the sender, whereas previously the recipient of the letter paid the postage upon delivery. It was only used for one year before being replaced by a Penny Red when they reversed the colours of the stamp and cancellation marks.
It featured a cameo portrait of a very young Queen Victoria at age 15. The two upper corners had star-like designs and the lower corners had letters designating the position of the stamp in the printed sheet
This stamp for the British Philympia was designed as one of three by David Gentleman (see link here for his other designs from 1970-99)

and because I will likely not be the only one to think of this stamp, I chose a second black stamp theme, this time featuring the Luna 9 - the first spacecraft to land on the moon.

Launched on January 31st, 1966, the Luna 9 became the first of the Soviet's Luna missions to make a soft landing on the moon on February 3rd

The second stamp shows the four petals which covered the top half of the spacecraft in an open position as it stabilizes on the lunar surface. There are four spring controlled antenae with cameras that projected the very first images back to earth (to the Jodrell Bank Observatory in England)