So, I guess I have no excuse for hanging on to my old cassettes, since my new car does not have a tape deck. I am only mildly disappointed by this. They have been whittled down to a few of my most favourites and even then I barely remember what is in the box. Until I open it and get an emotional rush. I still have a stereo that has a tape player and a turntable which is in perfectly good working order. Or at least it was about five years ago when I last tested it. Perhaps if I had an ipod, I could transfer some of the music from the tapes and records onto it. If I had any idea how to do that. The new car has an ipod thing.

During one of my recent de-cluttering events, I came across a portable cd player I had bought for my father when he was in hospital. He died seven years ago and I had forgotten I still had it. There was a  Louis Armstrong cd inside. It was in a different drawer from the walkman I have had since godknowswhen. There was a Pat Metheny tape inside that one. (I have occasionally wondered what happened to it.)  There may have been a tape inside my car that is now gone, I just realize....... I forgot to check.

Anyway, there came a day a few weeks ago when suddenly I realized I had had enough of my old car that needed more repairs - some important, some minor enough to ignore as I had been doing already. Once I had made that decision, I couldn't get rid of it fast enough. After doing some research, I thought I would give Kia a try. Reviewers who test drive these things seemed to have been pleasantly surprised at their performance.  I've never had a brand new car before, but I figured if I could find a new one I liked within my budget, then great, otherwise it would be a harder job to find a used one. New cars are much easier - you go to the dealership and test drive, then decide. Used means going to several places and trying out every car you might consider a contender, perhaps a couple of times. And it may involve more negotiating. And I didn't really want to do all that. These guys were all over themselves offering me little extras (and I mean little: a gas card, a points card, keychain, a car wash bucket with stuff in it, even an ice scraper) which were nice gestures. And I like the idea of a 5-year warranty. Never had that before!

I now have to get used to driving something smaller and a little less luxurious than previous, but also that at least does not leak or make strange sounds and has all its interior lights functioning (as mine burned out, I never bothered replacing the bulbs. I spent a lot of time sitting in brightly lit gas station bays to do my paperwork and find stuff that had dropped...) And it is red. For the first time in about a dozen years I have something that is not silver. I was getting a little bored with the silver anyway. Though, one of the guys who delivers a different newspaper to the same apartment buildings as me also drives a red car and I have already come outside and thought it was his car, until I realized that this one was shinier, and, dare I say, nicer looking. And all mine. 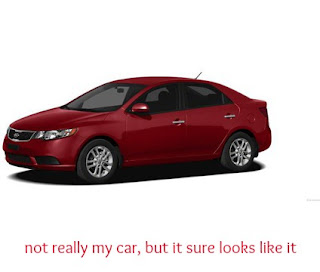 Labels: because you asked, buying stuff, I wish I had a Tardis