Ed Mirvish has been in the headlines again this past week with the announcement from his son, David, that the one and a half blocks known as Mirvish Vilage in the Bathurst and Bloor area of downtown Toronto would be put up for sale.
You can see that something like this would be missed! 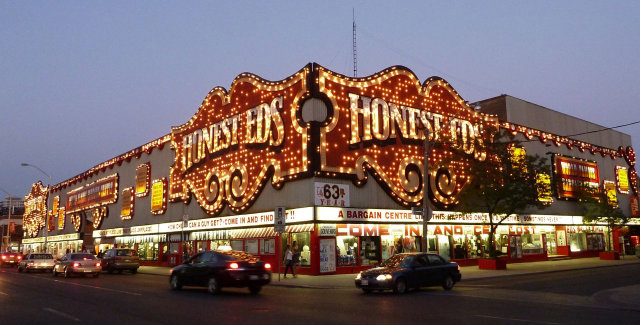 Ed Mirvish was born in Virginia on the 24th of July, 1914 and the family moved to Toronto in 1923.
A businessman, entrepreneur and philanthropist he was also a beloved, larger than life figure in the city. Apart from this over-the-top gaudiness of his 'famous bargain house' where everything was cheaper than you could possibly imagine, Mr Mirvish also made his mark in developing the Entertainment District with theatres and restaurants. 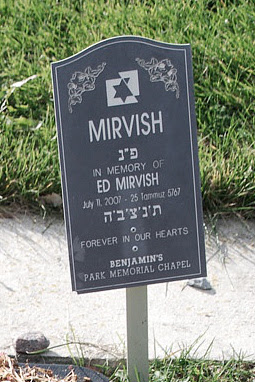 So it might seem odd that such a man would still be without a head stone at his grave in the Pardes Shalom Cemetery. It is Jewish custom to have a marker put up within a year, but Mr Mirvish has been gone for 6 years as of July 11th. Instead, there is a simple black marker from the funeral home. His son, David, has taken a lot of flack for this oversight and he has said that he's been very busy and that it has been difficult since his father's passing. Though his father's memory has been honoured in many other, public, ways - a theatre has been [re]named in his honour and a parkette and street have been dedicated to Ed and Anne Mirvish as well as an annual award for entrepreneurship.  He admitted that he doesn't visit the cemetery and Ed's wife, Anne, whom he married in 1941, in failing health and 94 years of age, also has not been to see where her husband is buried.
However, in one recent interview there was an indication that a marker may be soon in place. David has finally, after a long deliberation, perhaps settled on the wording.