The Parliament Buildings have featured on the definitive stamps several times. This series from 1977-79 which also includes a 1¢, 5¢, 12¢ is a one-colour steel engraved stamp based on a photograph by Reinhard Derreth from Vancouver and features an 'oblique view of the Centre Block with the Peace Tower predominating'.
Moving on to this series from 1985-89 designed by Montreal graphic artist Rolf Harder, we have the Parliamentary Library predominating. This view is from the back which overlooks the Ottawa River. Opened in 1876, the library was the only building spared when fire destroyed the Centre Block in 1916. An iron door separated it from the flames sweeping the remainder of the building.

The 34¢ stamps issued in 1985 were printed in four-colour lithography and the 36¢ with added autumnal colours in 1987. 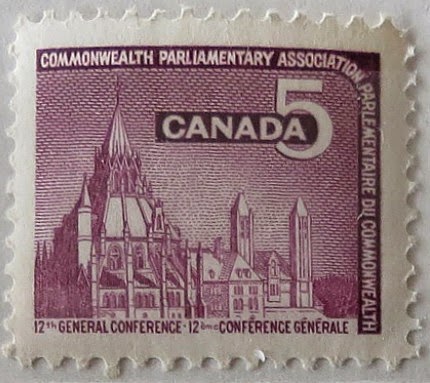 Above is another view of the Library for a stamp commemorating the Commonwealth Parliamentary Association issued in 1966.
designed by Paul Aleksander Pedersen
picture engraved by Allan Alexander Carswell
lettering engraved by Donald J. Mitchell


and back to the front of the Parliament Buildings with the Centre Block and the Peace Tower flanked by Queen Victoria and King George IV. This stamp was issued to commemorate 100 years of responsible government, so the reigning queen in 1848 is shown with the reigning king in 1948. 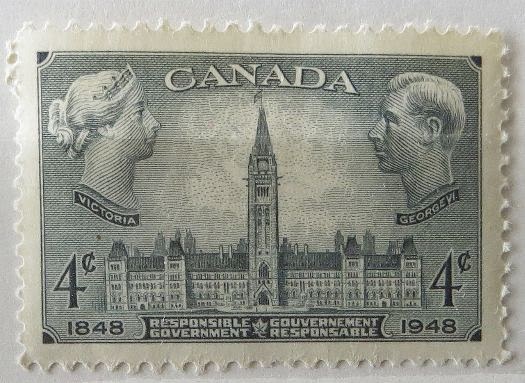 The Parliament Building was used on this steel engraved stamp since it is 'the meeting place of the elected representatives of the people of Canada'.
Picture engraved by Silas Robert AllenDesigned by Herman Herbert Schwartz

We are allowed to use the older stamps at face value on current letters, but I've just done a quick calculation to see the inflation rate (I have no idea how these things are figured out, I just used the Bank of Canada inflation calculator)