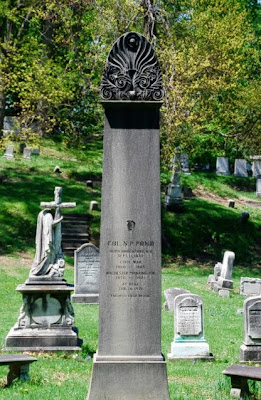 Colonel Nathan Patchen Pond was born on September 11, 1832 and enlisted as a private with the 3rd Colored New York State Cavalry and quickly rose through the ranks to squadron commander and Major of the 1st United States Colored Cavalry, to Lieutenant Colonel of the 2nd United States Colored Cavalry
He was discharged after the war ended in 1865 but remained active with the G.A.R. (Grand Army of the Republic) until his death at age 88 of lobar pneumonia in 1921. His first wife, Julia Beecher Pond died at age 36 in 1887 while she and Nathan were returning home from Florida. They were on a train when she took ill and became very weak and within 30 minutes had succumbed to what was later determined to be tuberculosis. His second wife, Susan Moore Pond, died of a cerebral hemorrhage at age 84 in 1942. When Susan Pond had this monument erected in her husband's memory, Julia Pond's body was moved to this location. Both of their names along with birth and death dates are inscribed on the other side of the obelisk.
In 1870 Pond founded the Rochester Printing Company which began printing the Rochester Democrat & Chronicle and remains today as Rochester's only daily circulated newspaper.