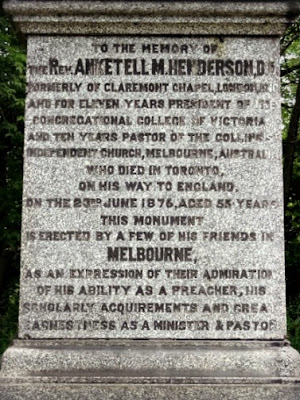 Anketell Matthew Henderson died on June 23rd, 1876, at Toronto, in Canada, whither he had gone for rest and change of scene.
edited announcement from The Argus (Melbourne Australia) Friday 4 August 1876
News by cable brings intelligence of the death at Toronto of the Rev. A. M. Henderson, late minister of the Collins Street Congregational Church.
Born in Ireland, he emigrated to Australia where he was requested to help revive the Collins St church which, from various causes, had been greatly reduced in numbers, and stood much in need of a revival of its formerly possessed importance.

His style was not only earnest and forcible, but his extensive reading gave him an advantage in illustration of which he made excellent use. But he was a man of strong will, and had a somewhat despotic manner of asserting it, so that, with no doubt, the best intentions and most praiseworthy purposes, he sometimes made enemies whom a little tact might have converted into friends. 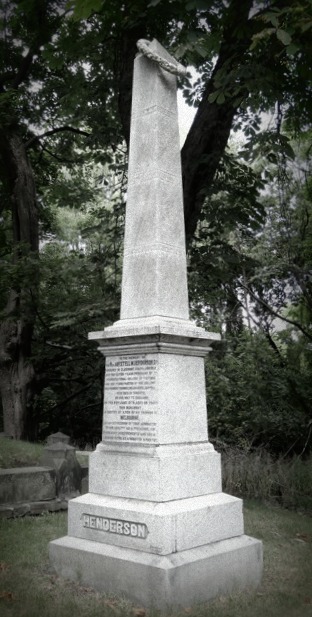 Still, it seems he had enough admirers to have a special monument erected at the St James Cemetery near the home of his nephew John Garvin of 342 Jarvis St (image) where he had been staying when he died.
About a year ago Mr Henderson's health began seriously to give way, and he was recommended to discontinue his duties for awhile. Arrangements were made for a tour to the old country by way of New Zealand, where he derived much benefit from the mineral baths. At Honolulu too, he rested awhile.
The newspaper account does not specify what his illness was, but did indicate that "from the nature of the affection from which he suffered it was hardly likely that any improvement would be permanent".

It seems the Rev Henderson also had some run ins with the press and this newspaper did not shy away from pointing out a few of his faults due to his impulsive and aggressive nature.

It is unknown whether he was travelling alone, but he left behind "a widow and five children, two of whom are married".