pies and other things

As happy as I am to see the back of summer, with all the too-hot temperatures and insane amounts of humidity that drained all my energy and left me dripping at all hours, I will miss parts of summer. Like the farmer's markets. I know, there are a few year round markets, like the Hamilton Farmer's Market and the St Lawrence Market, but they are a different breed. More of a business than farmers out selling their produce. 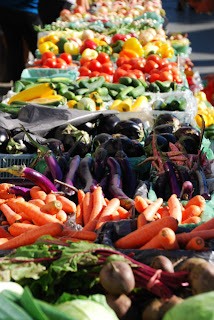 Considering I live in a very urban area - or maybe because of that - there are a LOT of markets around here. I thought I might try to get to as many as possible this summer, but I failed miserably once I found a few favourite stalls and kept returning to the same markets each week. I never even made it to any of the local markets held all over Toronto.

From Wednesday through Sunday there is a market somewhere. There are morning markets and afternoon markets of all sizes held in vacant lots, parking lots, church lots, and in barns.
Some towns close off the main street for a few blocks 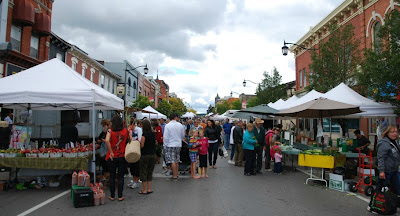 The street markets tend to have a greater variety of things for sale - crafts and such as well as food. And of course there are the shops and restaurants on the street to also tempt you. 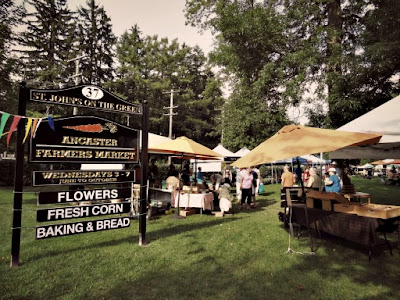 But by far, my favourite market is the one in Ancaster that is held on a church green surrounded by trees and flowering hedges. There is entertainment provided. A bunny for the kids to pet and hold. And free samples at many of the stalls.

I am fortunate to have the ways and means to take advantage of these markets. I have driven for up to half an hour to get to some, whereas I usually just shop at the nearest grocery store, or on my way home from work. And, I would never pay the prices these markets charge for food at a grocery store - but then you don't get the flavour at the grocery store. You don't get the produce picked that morning and bundled into a truck and transported a half hours drive or so. And you don't get the individual attention with explanations of the produce. Or the free tastings. Grocery stores aren't usually big on giving food away. They also like their produce to be perfect and uniform in size, which really doesn't affect the taste. 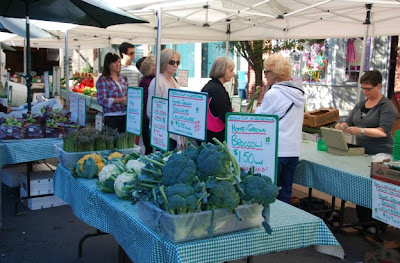 Just look at the size of that broccoli! And you would not believe how heavy that $2 cauliflower was.
Or how much soup it made.
I have fallen in love with the soups and pot pies from a certain catering company and am starting to stockpile to get me through the winter. If you are not first in line, you may be out of luck. Many times I have gotten there and they are sold out of the soup or pie you want. They can hardly keep up with making them and can also only bring so many in their van. Apparently someone came by within the first quarter hour and bought 20 of the chicken pies last week. Really. They are a catering company - could you not have contacted them and put in a special order so the rest of us could still have some? 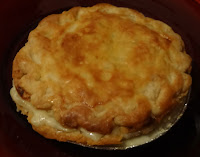 goodness oozing out of this chunky chicken pot pie
Sometimes, you end up buying foods you never would have considered before. There is a salami stall that is the first one as you enter the far end of the market. I am not really into salami, I don't mind it say, on a pizza, but I don't particularly like it enough to buy a chunk. So I have always walked right past this stall. Last week, there was a lull in the crowd and the man standing behind the counter offered me a delicate, paper thin slice... and waited for my response. Quietly counting, 3, 4, 5... ahh. "I always tell people to wait between 5-8 seconds and suddenly the flavour bursts throughout your mouth". You end up saying something ridiculous, like "man, that is delicious", just in case they don't already know that. A couple other samples and I walked away with a small chunk of the most sublime tasting salami I have ever had. The trick, apparently, is to slice it very thinly to get the best flavour. There is probably only one or two good weeks left before it gets too cold for the vendors.
And now I only have five pies left.
Posted by VioletSky

Labels: a lovely day to be outside, food, shopping can be fun