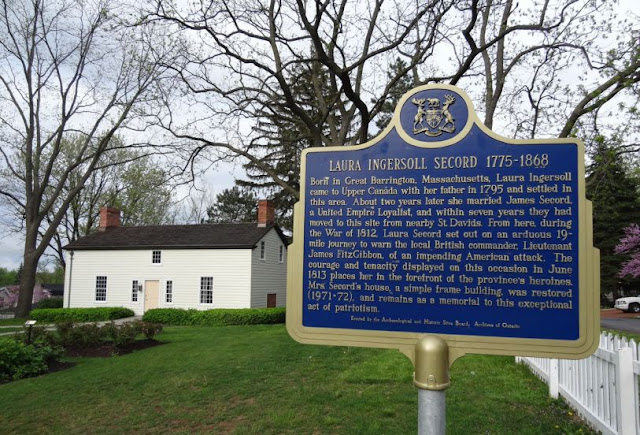 This unassuming farm house in the (now very sleepy) town of Queenston is where Laura and James Secord lived from 1803-35 and where she raised her seven children (one son and six daughters). During the War of 1812, the home was taken over by the Americans who had added to her household demands by billeting three soldiers with the family. 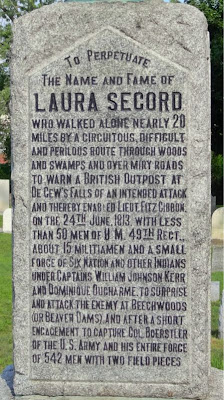 The American soldiers let down their guard and discussed a planned attack. James had been seriously injured during the Battle of Queenston Heights early on in the war and Laura was still nursing him back to health. I'm sure those soldiers never expected Laura to make her way through 20 miles of rough and dangerous woods to warn the British of their plan. But she did. Her heroic deed was not recognized until 1860 when the Prince of Wales made a visit and learned of her feat. Thereafter she became the celebrated heroine of many tales, poems, drama and legends. There was story about a cow being dragged along on the journey but that has been discounted as completely impractical. After the war, the comfortably well off Secords were reduced to poverty for several years. James eventually got a position as a registrar, then judge in Niagara and finally as a customs inspector in Chippawa. Since that was about 11 mi, or 18 km, away, they sold their house and moved. After he died in 1841, Laura was again left destitute and opened her cottage as a school for the Chippawa Natives to make ends meet. 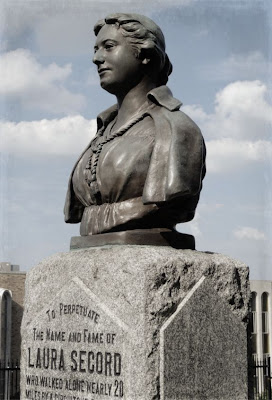 There were no portraits of Laura, so we really don't know what she looked like, but there are two busts of her - one at Lundy's Lane in Niagara Falls and another in Ottawa near the NationalWar Memorial. Both James and Laura are buried at Drummond Hill Cemetery.