The news that the nearly 500 year old Royal Mail is soon to be privatized came out this week. I can't begin to imagine what this might entail, though I have tried to read as many articles in the UK papers as I can. It hasn't seemed like privatization has worked well on any of the other British institutions and the talk continues over here on what to do with Canada Post as it seems to be losing millions of dollars. I get very annoyed when I hear dismissive comments like "get rid of it - who sends a letter anymore anyway?"
With Postcrossing, I am at the post office at least 2-3 times a week. Once I learned that you can save on the HST by sending your letters when you buy your international stamps, I no longer stock up and instead head out whenever I have three or most postcards ready to send. It is a rare occasion that there isn't a line-up at the counter. And this is at a substation located within the Shoppers Drug Mart that's usually open 7 days a week for about 12 hours a day. Now, I admit, I also have a tendency to get there between 4-5pm just before the mail is being picked up but still, there's always other people waiting to send something. So I say to these dismissive types who can't 'remember' when they last mailed a letter - maybe you should talk to the post office employees at your local Shoppers to see how busy they are since you obviously assume everyone else is just like you.
Okay, rant over. 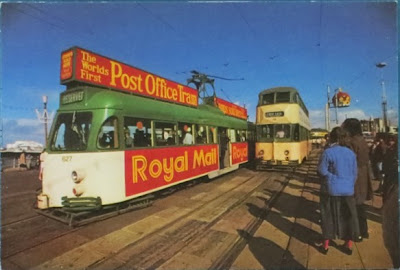 
The Post Office tram was first used during the period of the Blackpool illuminations 1981. hired from Blackpool Transport Dept to promote the use of holiday postcards, the tram was adapted to accommodate a full-time philatelic sales point. 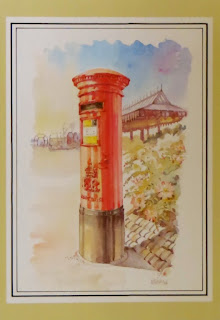 When I tried googling the words garden festival, Blackpool and Fullwood, I came up blank - except for a copy of this postcard sold on e-bay


these are NWBP Series. not sure what that stands for - maybe someone from England can enlighten us?