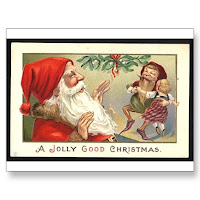 St Nicholas was apparently a very shy bishop and and was known to travel mostly at night. Once, so a legend says, he wanted to leave some money for a family without being seen, so he dropped some coins down a chimney where they landed inside a little girl's stocking. St Nicholas, in continental Europe, became all about gift giving whereas Father Christmas, in Britain, was still about merry making and feasting. 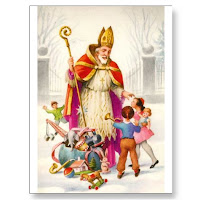 Having the two combined, was too much for the Puritans who succeeded in having him and Christmas banned. Apparently there was an awful lot of drunkenness and overeating of mince pies and looting of houses if the merry makers were refused entry. They also didn't like that St Nicholas was a 'saint'. He seems to have survived in Northern Europe during the Reformation because he had moved beyond the Church and was so beloved. In Europe, his feast day, December 6th (or the night before), is the main gift giving time over Christmas, December 25th (or the night before). The Netherlands is the only Protestant country to maintain the legend of St Nicholas. The Puritans certainly didn't bring him along to the New World with them. 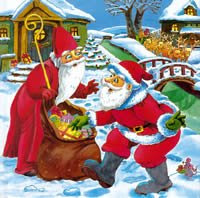 After the American Revolution, the New Yorkers who stayed, glad to be rid of the British, remembered with pride their nearly forgotten Dutch roots and made St Nicholas the city's Patron Saint. Pretty soon the satirists got into the act and caricatures and poems were appearing. St Nick, or Sinterklaas as he was affectionately called in Dutch, changed from looking saintly to a portly Dutch guy with a pipe. The poem 'Twas The Night Before Christmas' sealed the image of this un-St Nick-like Santa Claus, as did the cartoons and drawings that were based on this entirely made up tale. By the 1920's Santa's image had become more consistent and by the time Coca Cola had hired an illustrator for advertising, gift giving had become a huge phenomenon what with mass production and importing and this was just what was needed to symbolize the gift giver. He became more and more associated with commercialism and less of charity. 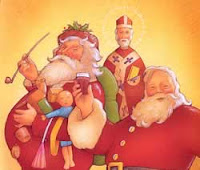