where I impart some history 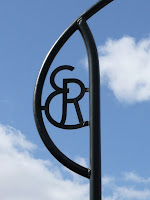 My photo for SkyWatchFriday includes a light standard. An historic reproduction light standard. One that anyone who travelled the QEW regularly would recognize. They used to be much more numerous, but most had disappeared over the last 40 years in favour of bland truss style lamp posts. That one isn't taken from the QEW, as that would have been unsafe, but I found it at a seniors community centre in Oakville and I took advantage of the parking lot to capture the image. There was some thought that maybe the last of these artistic light standards would disappear, but instead, more of them are appearing on the new bridges as a nod to the historical significance of the Queen Elizabeth Way. Two such examples are at the new Bronte Creek Bridge and Sixteen Mile Creek Bridge. 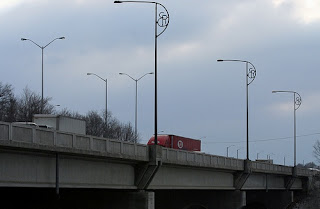 photo: pquan flikr
I came across a letter in a local paper from someone who is "saddened and disappointed" that we are using such "outdated symbols from a different time" and suggests that we should stop "perpetuating historical symbols". In his letter he says that he is "not particularly “anti” the Queen or the colonial era, but I am an immigrant and, while I accept these things as part of Canada's past, suggest that we should move on."

He is very much misinformed, and misguided, if he thinks that a) "those who identify with [the ER symbol] will be few in number", b) this ER is about the Queen, and c) the highway is of a colonial era.

A flurry of letters responded to this anarchist. Well, as much a flurry as any wrong-headed letter-writer in a small local paper might receive. Some of them were almost as misinformed, but every one disagreed with him about erasing our past. And many felt a small wave of nostalgia when the lamp posts were erected.

Such displays of symbols are a good way to learn a bit of the history of where you live (or are visiting).

So, very briefly (I don't want to bore you, dear readers!) neither the highway, nor the Queen, is of a colonial era. That ended in 1867 with Confederation. And, the Queen Elizabeth in the ER, is not Queen Elizabeth II, but the wife and consort of King George, Elizabeth Bowes Lyon, affectionately called [the] Queen Mum. It was on their visit to Canada in 1939 to commemorate the coronation of King George that the highway was officially named. Eventually linking the western edge of Toronto with Hamilton, Niagara Falls and Fort Erie, and to the USA, The Queen Elizabeth Way is the only highway without any numbered designation. A lot of the vintage architecture is slowly being dismantled as the highway (note not freeway, that's American usage), is being upgraded and widened, but those iconic ER light standards are slowly being reintroduced as a nod to the historical significance of this major travel route.
Oh, and the ER stands for Elizabeth Regina. That's latin for Queen Elizabeth, the one who was neither the I or the II.
Posted by VioletSky