where I use up the leftovers

My family is not one of those to over gorge themselves with food.

I am still eating leftovers from Sunday's dinner. I tried to give away as much as they could carry, but it was a struggle at times as I pointed to my freezer, "do you see the immense smallness of that thing?" after protestations of keep it, you can always freeze it y'know. Yes, I could make soup, I could eat it for breakfast, lunch and dinner and snacks in between. But, I don't want to. I will be sick of it long before the week is out, then it will be bad by the time I remember it sometime next month. The times I have bought fresh produce, with all the greatest of intentions, only to bung it in the non-clear crisper bins and promptly forget about it. Or use a small portion, then ... end up throwing it out weeks later after it has sat decomposing, because, really, just how much parsley does one person need?

Of course, part of this week's particular problem involves the vast amount of food I bought because feeding six is a lot more food than for one. With the help of my friend (yes, the one who likes to help - though at least this time it did not involve travel plans). He has access to the "market" that is actually the Ontario Food Terminal. That massive swath of land under the highway in west end Toronto where growers and wholesalers of all things vegetable, fruit and plant sell their wares to retailers of all manner of grocery stores. 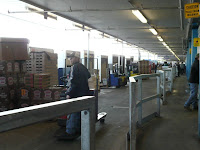 The general public is not invited. I love going there. The shear size of the market, and the quantities of food, blows me away every time. Watching the guys zip along on their motorized forklifts and scooter type things is fun, too. (click on photos to embiggen) 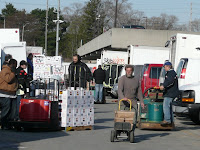 The thing is, you can't just buy one or three cauliflower. You must buy the whole flat or box. As in 15. I split it with my friend, then gave away some to the family and to a neighbour. I still have four. But, the price of this stuff makes it worthwhile, and now I know how much of a mark-up some of these grocers take to their advantage. Pusateris and Longos and the Asian shop on the corner all shop at the same food terminal. My cauliflower was much less than a dollar each. 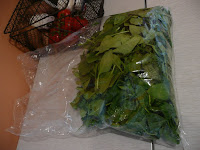 Oh right, and I thought I had problems using up a bag of parsley...
I have some spinach and caulifower soup to make. A modified recipe involving:

Labels: eating for one, family, food, some friends just want to help