someone with personality lives behind this door 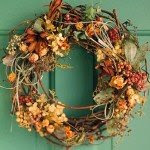 My neighbour, who used to live directly across the hall from me, liked to tell me of the cute things her three year old granddaughter would say. Things like: Oma, why doesn't that lady have something pretty on her door like you have?
Mine was the only one that stood naked.

After the second retelling, I took the hint and went out and bought some very large pinecones and attached them to a big red ribbon and hung it on a hook on my door. I went for drama.

This seemed to please the ladies on my end of the hall, and I got compliments and remarks like:
Well, it's about time you put something up
Bethany will be so pleased next time she comes to visit
Nice big pinecones
I like your new decoration
Very nice, but it's a bit Christmassy with that red bow and it's only October
(yeah, that would be Helen, the one who spoke her mind).

If anyone has spent time wandering the halls of a seniors' home you'll notice that almost all of the apartment doors are festooned with some sort of decoration. This at least helps break up the bleakness of a long hall of doorways. It also adds some personality. And is a good marker for finding your way home again. Though that can work for anyone, really. I once had some poor embarrassed woman enter my apartment by mistake. Had I my pinecones up, she might have noticed she was on the wrong floor before dragging her laundry into my front hall. (and yes, I keep my door unlocked when I am at home, as did she, apparently). Other apartment buildings seem to have door personality about them. I've been in buildings where every door has something up, and buildings where only a few are decorated. My building was definitely heavily on the decorated front when I moved here. Now, sadly, not so much.

Some of these door decorations are a little too cute and country-ish for my taste. Some are tacky. Actually, many are tacky. Many have fake flowers of some sort that are usually not in season. Occasionally, you will see some beautiful or elaborate decorations. I remember once seeing a doorway covered in a strand of fake wisteria draped as if growing over an arbour. Sometimes dolls or stuffed animals are strung up. Most however involve wreaths or hats with flowers. Not everyone goes all out to decorate their doors. Many are left naked.
Christmas is when the door decorations really have their best display. Large ribbons decorate the door as if opening a big present. Garlands drape the doorframe. Wooden Santas and sleighs hang onto hooks. Sparkly door knob rings jangle. The wreaths get larger. Berries, bows and bells appear. As do pinecones. None as dramatic as my huge ones, however. (which I do not have a photo of, and they are packed away)
It is all very festive and lively.

And then, around the second week in January, the festiveness disappears. And the fake flowers reappear.
I like the decorations. Even the tacky ones. It reminds you that someone actually lives behind the closed doors.
Posted by VioletSky