Apart from one intensely rainy day last Friday, we have the most wonderful weather these last couple of weeks. It has been hot, but not so humid that sweat drips out of every pore. The sun has shone. The sky has been blue. It has been perfect summer weather. Except that it is fast approaching autumn. You can tell by the ever encroaching darkness on our blissful, beautiful days.

I love autumn, or if you prefer, fall. I like the crisp coolness, the sweaters, the hot chocolate, the pumpkins, the colours, the stars at night. But I did not enjoy our unbearable summer. I don't like it when it is too hot to actually be outside and do anything. Sitting inside in air conditioned comfort on what looks like a gorgeous day is not nearly as much fun as being outside on what is clearly a gorgeous day. So I almost feel as if this now is the summer I wished for.

If only we weren't losing almost three minutes of daylight every day to enjoy it.
Posted by VioletSky 21 comments:

Labels: a lovely day to be outside

So, another TIFF has come and gone. The frenzy is over for another year. And not one movie star did I see. Of course, it might have helped to go to one of the Red Carpet events, but that seemed like far too much trouble. And I'm not sure I really want to meet a big name star. Just seeing George Clooney walk into a theatre or out of a restaurant might fill me with tingly excitement for a few hours, but to actually talk to him would fill me with nervous dread. What would I say that could be original? Or not stupid? You hear of people who have met one of their favourite stars and gushed over how much they were loved in a certain role... except they were not the one in that movie. I would be mortified if I made that mistake. I would probably be so tongue-tied, I would either forget to breathe or would come up with some gibberish before my idol was gently steered away by some brusque handler. Besides, I would much rather see someone famous actually doing something, even an interview, or a reading. Or better yet, a play.

As much as I love the idea of the Toronto International Film Festival, I feel no need or desire to pay more money to see a movie that may be Oscar worthy first, before it goes into general release. I also don't need to see it on opening night. Though, I do draw the line at waiting for it to come to television. Films were made for the big screen and seeing with dozens of other people to get the shared experienced and excitement. The movies I went to see were the more obscure ones and the 'shorts'. Okay, I only went twice. Way back, in TIFF's infancy when it was still known as The Festival of Festivals, a group of us from work would head up to the theatres and wander from one to the other and talk to people in line to find out what they had seen and then rush from one screening to another. i saw a lot of interesting films that never made it into general release. Now, your selections must be pre-ordered and they aren't held in any of the no longer standing independent theatres. And, because I don't live in Toronto, it makes it even more challenging to attend.

Anyway, I wonder if any of you have met anyone famous? Or if not, who would you like to meet? And more importantly what would you say to them?
Posted by VioletSky 21 comments: 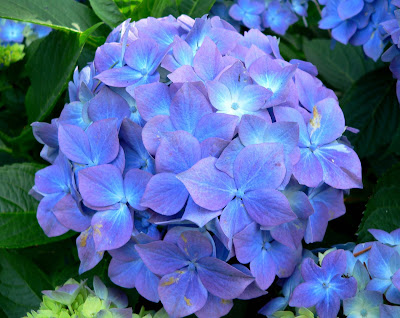 a way to distract from a universally panned film....
Personally, I LOVE Hydrangeas 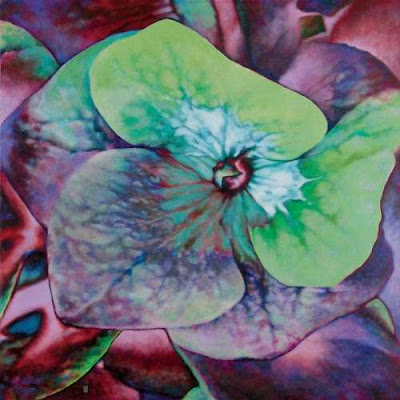 It was a busy weekend for being outside, especially on Saturday. Toronto may have the international film festival (TIFF) with George and Brad and their pals floating about the city and red-carpetting the entertainment district and noshing at local eateries and contributing to the economy, but Hamilton had the Canadian Country Music Awards (CCMA) with free concerts by many of the artists on the rooftop of the Jackson Square Centre. PLUS, on the next block, what is known as the James Street Supercrawl with 3 stages of indie rock and lots of artist stalls and vendors and open studios.  PLUS, a few blocks away, the Locke Street Festival with another stage and lots of food and crafts and vendors. All this was within walking distance, but there was a shuttle bus available to give your tired legs a rest. The bus also went a few blocks further north to the waterfront where there was not one, but two ships visiting. The HMSC Montreal and the Pride of Baltimore. One is a frigate in current wars and the other a replica warship from 1812. 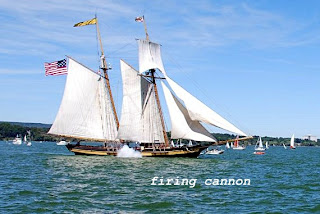 I got there just in time to see the Baltimore do a turn around the bay and fire a cannon or two. This was in response supposedly from a cannon fired on our side, but ours sounded more like a pop gun, and the American one was a little more ... booming. Enough to scare a little boy standing near me who needed some reassurance from his dad that no, there were no real cannonballs. 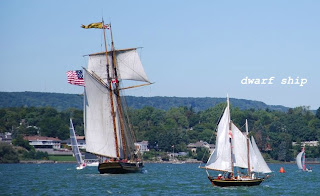 This smaller four masted ship was fun to see 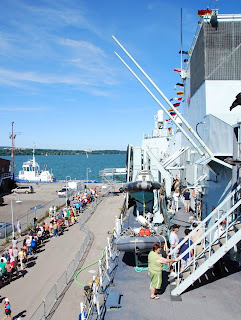 Don't ask me why I chose to stand in line for an hour to get on board the Montreal - halfway up those open tread, wobbly, steps was not the time to remember how afraid I am of heights.

it wasn't much different than the Fredericton I was on last year.
Except that then it was a wet, cloudy, miserable day and this time it was a warm, sunny, breezy day. 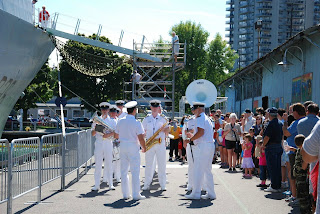 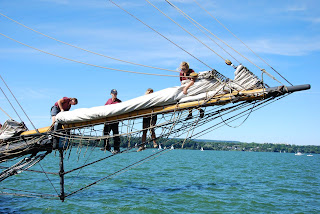 those sails needed to be tied down securely.
I didn't get any good pics of the bands playing and before I knew it, it was getting dark by the time I left Locke St and headed back to the CCMAs and the Supercrawl. 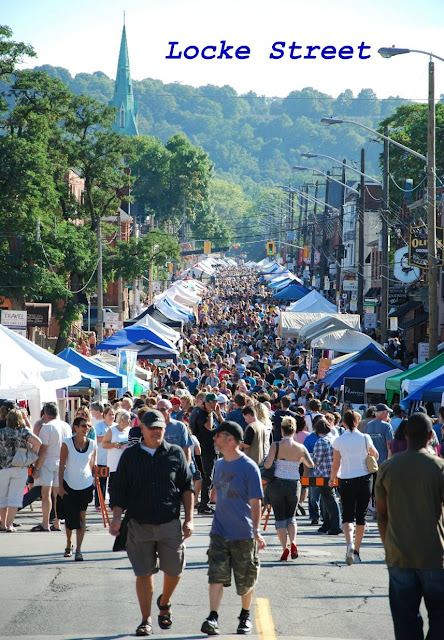 Plus it was rather crowded.
And a fun time was had by all.
And it was all FREE.
But there was no George Clooney..... sigh
Posted by VioletSky 7 comments:

Labels: fall festivals, where I live

There is a lot of construction noise around me. The balconies are being replaced and even though the work has started on the other side of the building the noise vibrates right through. 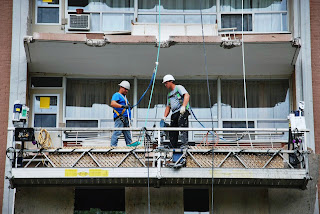 I refuse to complain, as it is desperately needed and will look wonderful when the new railings go up. 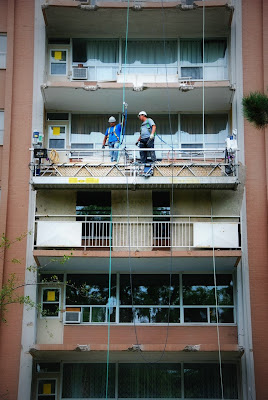 In the meantime, management has quietly left these for us.... 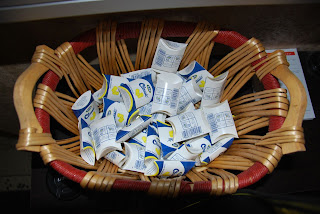 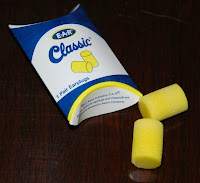 I am here to tell you that they do not work all that well.
Posted by VioletSky 10 comments:

Labels: apartment life, where I live

The season of Cruise Nights is drawing to a close.
It is an expensive hobby, keeping these old classic cars in good condition, only to be driven to various parks and parking lots for the sole purpose of showing off. Many times, you'll see a car pull into a spot, the owner get out and set up a lawn chair, then sit in it reading a book. At a quarter to eight, they pack up book and lawn chair and drive off. Other people are more engaging. Many seem to meet up with friends and fellow collectors they know from the circuit.
Still, I enjoy these nights of admiring and sighing at the designs of older models. I don't know a lot about cars, but I am learning. I take photos and look up the history and stats on the internet when I get home. For the most part, you often see the same cars (not literally the same, but the same makes) and I can now recognize when there is one that is a rare colour or has a slightly different grille.
To amuse myself, I try to get creative by concentrating on different aspects of the cars each time. (one can only have so many pictures of cars that one has no idea what to do with.) One time it might be the tail lights and fins, another time the door handles... I still have to work on getting good shots of the dashboards. I don't generally decide what the focus will be until I get there, but with this last cruise night at Pier 4, I was a wee bit disappointed when the old police cars that were to be on show materialized in ... one car. From there, I chose to focus on photographing the make and model names. 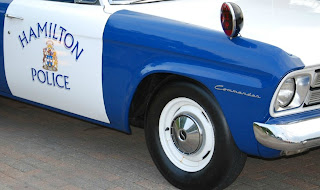 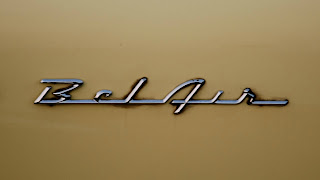 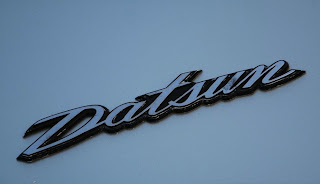 It wasn't intentional, but once I had sorted and cropped and uploaded them onto this post, I realized they all were joined letter font.

SundayStills, where we could post anything we wanted.....
Posted by VioletSky 21 comments:

Labels: it's all in the details, photography, Sunday Stills
Newer Posts Older Posts Home
Subscribe to: Posts (Atom)
Lately, this blog seems to be all about postcards, stamps and dead people and where they now reside. Sometimes I throw in an adventure story.