from when Estonia was part of Russia

A few lighthouses from the USSR era. These stamps were issued in 1983 and it seems all the lighthouses are from Estonia (I couldn't find Stisudden, though it's quite possible it a different name in Estonian)
• Keri
• Stisudden
• Kipu
• Tallinn
• Tahkuna

The Keri lighthouse was built in 1858 and stands 91 feet. The light is computer controlled, powered by solar cells and batteries, but from 1907 to 1912 it was the only lighthouse in the world to be powered by natural gas.

The Tallinn – or Tallinnamadal – shoal light is in the Gulf of Finland about 20 miles or 32 kms from the Tallinn shore. This was built in 1969 and took almost a decade to complete because storms damaged the base. It is now closed.

The Tahkuna is a cast iron lighthouse built in 1873. It was bought from the Paris World Exhibition in 1871 and is Estonia's tallest lighthouse at 42.7 metres above sea level.

for more lighthouses around the world, check out the links here
Posted by VioletSky 9 comments: 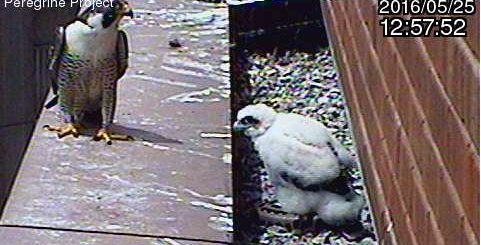 Three weeks ago, we saw this chick

For a couple of weeks we knew that she would be an only child, though no-one knows why the other three eggs didn't hatch. 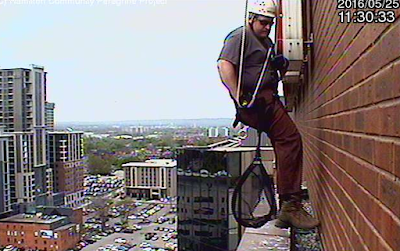 Earlier today, the chick was picked up and weighed and banded and named. 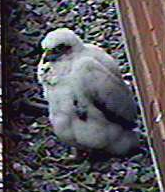 At 953grams, she is a big youngster. She has a red band on her right leg for easy identification.

Meet Ancaster, named for the city (now amalgamated with Hamilton) that was settled in 1792. I'm not certain, but I believe she is the 48th hatched peregrine from the Sheraton Hotel. 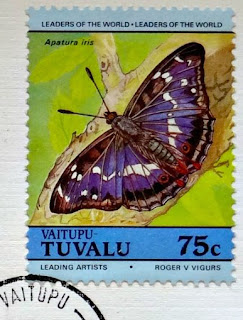 An Apatura iris, illustrated by Roger Vigurs.
This stamp was issued in 1985.

I admit I wasn't exactly sure where Tuvalu was (as a lifelong geography geek, these lapses annoy me) though I was fairly certain it was somewhere in the South Pacific. Tuvalu is a Polynesian island nation midway between Hawaii and Australia. It is about 180º west of the international dateline. Vaitupu is the one of the 'islands' - actually an atoll comprising 9 isles - with a current population of around 1,700, making it the second most populated of Tuvalu. 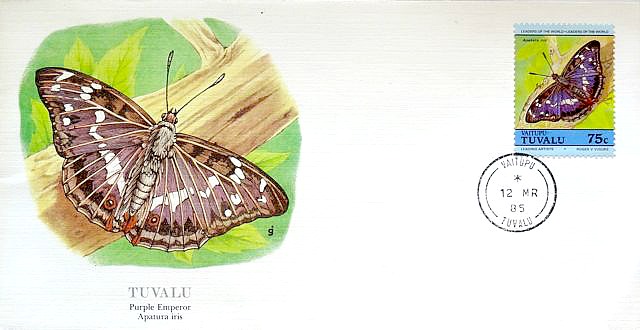 The Apatura iris, also known as the Purple Emperor, is part of the Nymphiladae family (that also includes other emperors, the Monarch, fritillaries, and admirals). Despite the name, the females have a dull brown appearance with only the males having the purple colour (as seen on the stamp) though the iridescent purple can only be seen from a certain angle. The adults can have a wingspan of around 3".
They spend most of their time in the tree canopy and unlike other butterflies they don't feed on nectar from flowers, instead enjoying a tasty meal from dung, urine and animal carcasses and a dessert of aphid honeydew and oak tree sap.
Oak trees?
Turns out they don't live in Tuvalu at all, but are found in the woodlands of Europe and England (but not Wales or Scotland). It is the second largest butterfly found in England and is apparently quite elusive. I found this interesting tidbit of the lengths people go to to find this beauty.

for an easier butterfly trek, follow the links at this week's Sunday Stamps II
Posted by VioletSky 13 comments: 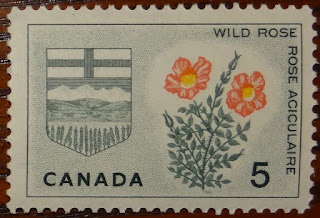 Alberta has been in the news a lot over the last two weeks (and the fires are still burning, though they have moved away from Fort McMurray. Thanks to the firefighters and first responders, the damage to Fort Mac is less than feared, though still formidable.)

Anyway, in honour, here is the Alberta provincial flower from a 1966 stamp. It was engraved by Allan Carswell and designed by Harvey Prosser as part of the floral emblem series from 1964-66.

The wild rose is the most abundant rose growing in the boreal forests of northern Canada. When faced with our climate, wild roses are typically more hardy, pest-resistant and beneficial to wildlife than the classic cultivated roses. The shoots, fruit, flowers and leaves are all eaten by humans and animals. The roots can be made into an ointment for the eyes, and arrows have been made from the wood When the Wild Rose is in bloom, its fragrance attracts bees and other insects to gather and distribute the pollen. As the flower begins to wither, it turns into a small oval shaped hard seed container called a "rose hip" which is also considered the fruit of the plant. The pink flowers bloom from late May to July.
In 1930 it was voted to be the provincial flower. The Alberta licence plates proclaim it to be "Wild Rose Country" and the provincial conservatives are the Wild Rose party (the one in opposition, whose leader also lost his home in Fort Mac.)

colouring in the lines

A memory I have from when I was young is of a deep despair when my colouring books were all coloured in and there were no more pages left to fill. Big, fat books they were as I recall. And, I was definitely one of those stay inside the lines colourists! So, you'd think I would be even a little excited about this recent adult colouring craze. There are books galore of almost every topic out there to instil creativity, or find your inner child, or whatever. Supposedly they are to induce calm and relaxation. Yeah, I also know people who knit for relaxation and truly, I cannot think of anything more frustrating than knitting. Except maybe colouring these new colouring books. Though, admittedly, I haven't really tried. 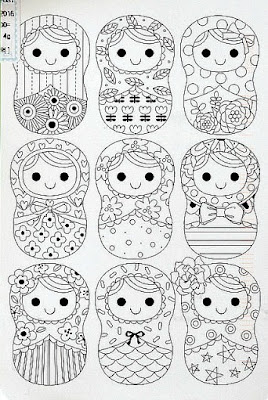 Maybe it's because they are so detail oriented. And tiny. Colouring postcards are also popular and this is one I received today from Sofiya. Perhaps I should buy myself some of the special pens/pencils you need and give it another try? I do like Matryoska dolls...

Interestingly, I also received these two cards - the same one - this past week.
How cool to see how differently each one has been coloured. 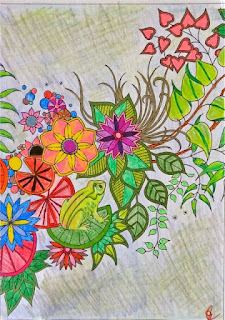 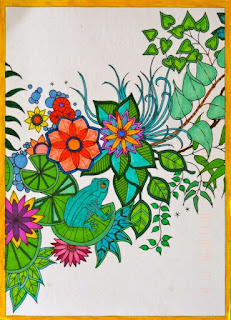 The peregrine falcons have once again nested at the Sheraton Hotel in downtown Hamilton. This year there are four eggs! This little one hatched on April 28th; still waiting for the other three siblings. 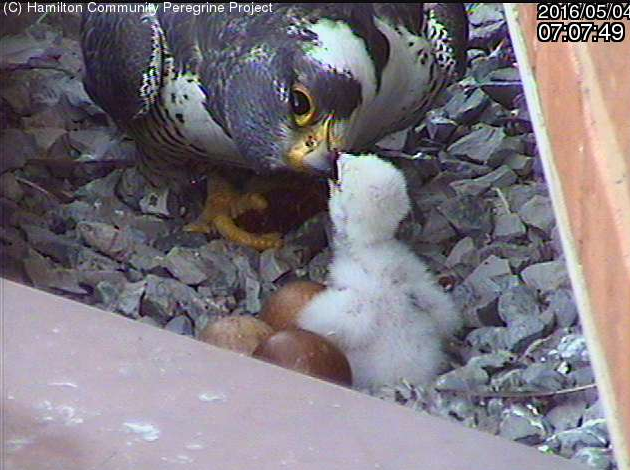 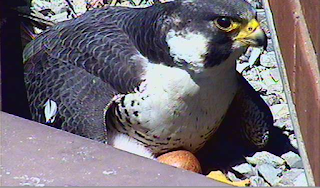 Unfortunately for us, Lily has for the second year, chosen the wrong end of the ledge to set up her nest. The other side would give the camera a perfect view of the eggs and hatchings.
And, unfortunately for Lily, there was snow in early April, but she  endured and stoically keep her eggs warm. 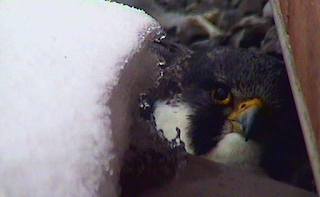 There have been peregrines nesting on the 18th floor of the hotel since 1994 and I became addicted to the falcon cam around 1999. Finally, with more flexible time on my hands, I thought I'd volunteer for FalconWatch where groups of people keep watch over the fledgling chicks to keep track of their movements and feedings, and most importantly are on hand in case something goes wrong and a chick needs help. They are navigating a busy downtown core of a large city after all. 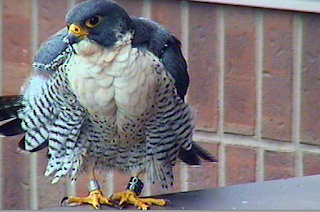 I thought a two hour shift once a week or so. After the first outing, I was hooked and ended up going several times a week and was almost sad when it ended once the chicks were flying and feeding well on their own.
I was rather grateful that last year there were only two chicks to keep track of.
But with the possibility of four... well, I'll keep you informed!
linking with Our World Tuesday
Posted by VioletSky 5 comments:

Labels: birds, Hamilton
Newer Posts Older Posts Home
Subscribe to: Posts (Atom)
Lately, this blog seems to be all about postcards, stamps and dead people and where they now reside. Sometimes I throw in an adventure story.