When thinking of invertebrates, my mind comes up with nasty things like beetles or spiders, or pretty things like butterflies. But, coral is also an invertebrate. It is not a plant, as many might assume. They are related to jellyfish and sea anemones. I did not know that.
I found this sheet in a $1 box, so was surprised when I found out later that it was only issued in 2015. The denomination is the Eastern Caribbean dollar
(currency for Antigua & Barbuda and also Dominica, St Vincent & The Grenadines, St Kitts & Nevis, St Lucia, Grenada, Anguilla & Montserrat).
At the moment 1 XCD = 0.46 CAD or 0.37 USD, 0.25 GBP, and 0.32 EUR 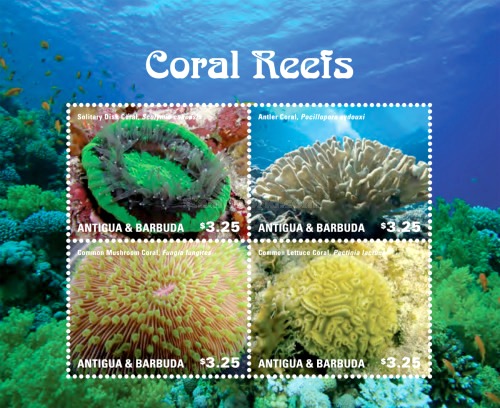 Coral reefs account for less than 1% of the planet's marine ecosystem while supporting nearly 25% of ocean life. A coral group is a colony of many thousands of nearly identical polyps and each polyp is a sac-like animal that is only a few centimetres long. They form when these polyps attach themselves to a rock or the sea floor. They then divide into thousands of clones. Each polyp excretes a calcium carbonate at their base which forms an exoskeleton where they attach themselves to each other and over several generations they form a larger skeleton or colony. Over hundreds and thousands of years, these colonies will join together to form a reef. Some reefs are known to be 50 millions years old.  The polyps themselves are translucent and they get these brilliant hues from the algae they host. They are carnivores and feed on zooplankton and small fish. 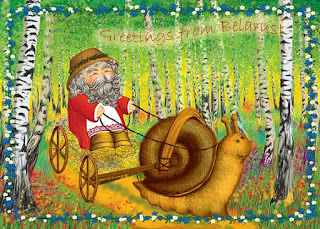 I have seen several of these postcards from Belarus and have even been lucky enough to receive some. But, really I had no idea what this gnome like creature was all about. Was he part of some Russian fairy tale? And why is he only in Belarus and not Russia? The variety of cards didn't seem to suggest a story line, but he does appear in many settings. Maybe he is part of the Belarus tourist industry that has taken off on a life of its own?

Finally, I realize that this creature is known as Damavik.

and this particular Damavik is the creation of a Postcrossing postcard site that specializes in Belarus artists for their cards. if you look up the website (Vanilla Tree Vale) you can find out more about him. 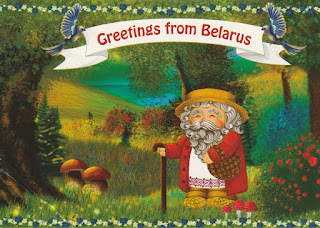 He is a Belarusian folklore character, similar to the Russian Domovoi, (and other Polish, Ukrainian and Lithuanian versions) a house spirit, or elf. Traditionally, it is said that these elves inhabit every house and they help with the chores if treated well by the family.

This Damavik lives in a cozy country home and eats traditional Belarusian foods – his favourites are mushroom soup and potato pancakes. 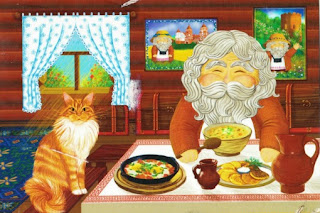 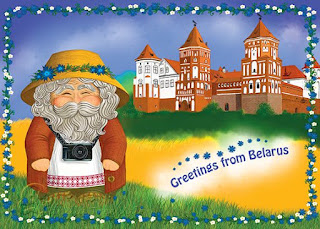 And by being a mascot of this postcard company, he sort of reminds me of the Travelocity gnome  as he travels around the countryside and visits such places as the Mir Castle (below) a birch forest (top) and collects mushrooms (second from top)
Posted by VioletSky 2 comments:

Labels: Absynthe's Postcrossing adventure, stamps&postcards, what I learned from Postcrossing

mammals of the sea

This is a particularly fine souvenir sheet designed by Keith Martin is from 2000 and shows off a Blue Whale in the centre which is so big he takes up more space than four stamps allow! The other three stamps each have a fragment of the blue which helps to show the relative size of each of these mammals of the sea. On the bottom left is a Narwhal with its unicorn looking tusk who lives up in the Arctic. The top right has a Beluga with its permanent smile that lives in shallower waters like the mouth of the St Lawrence River. And, over on the top left, is the Bowhead which lives in the Arctic and sub-Arctic. The Blue lives in the Gulf of St Lawrence and also off the coasts of Nova Scotia and British Columbia.
The Narwhal and Beluga are both 'toothed whales' and as such will hunt and chase their food – fish, crab, squid – and when they catch something with their teeth, swallow it whole. The Blue and Bowhead, on the other hand, are known as 'baleen whales' for their keratin baleen plates that act like a comb to strain their food. While being some of the largest animals on earth, they end up eating some of the smallest creatures – plankton, krill, small schooling fish – sometimes by just swimming around with their mouths open.

Here is another blue whale stamp – one that I don't have, but I just had to show it. As befits the largest animal, the stamp is both the largest in size and denomination of any Canadian stamp. It measures 128 mm x 49 mm (or, for those of us who still have little idea what a mm looks like, 5" x 2.9") and was designed by illustrator Suzanne Duranceau. Only 1,500,000 of them were printed, whereas 8,000,000 of the other whales were set loose on the public. 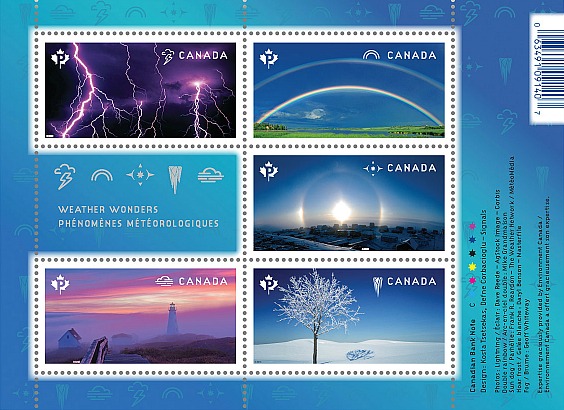 I rather like the French name for this series of stamps – meteorlogical phenomena, though I guess we all 'wonder' at the weather. Is there a country that doesn't think they talk more about the weather than anyone else? These stamps were issued to coincide with the anniversary of 175 years of the first weather observatory.

This beautiful set came out in June 2015. It was designed by Kostas Tsetsekas and feature the works of five different photographers from across the country.
The lightning was captured in Manitoba by David Reede; the double rainbow was found in Quebec by Mike Grandmaison; the rare sundog, created by ice crystals in the sky was seen in Nunavut by Frank Reardon (that's the Arctic city of Iqaluit shown); in Alberta, Daryl Benson found some hoar frost; and finally, at the Cape Spear Lighthouse in Newfoundland, Geoff Whiteway was up early enough to see this morning fog.

old man of the mountain

If you haven't already seen the Old Man of the Mountain on a the cliffs of Cannon Mountain in the White Mountains of New Hampshire, then you are too late. 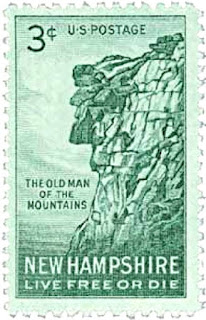 (as a troubling aside, I could have sworn this collapse happened maybe 3-4 years ago. but no amount of googling changed the fact that it was almost exactly 16 years ago - on May 3, 2003.)

His profile was first recorded in 1805 by a team of surveyors who were working in the Franconia Notch, though it is supposed that it was formed about 2,000 to 10,000 years ago after the last glacial period.
The formation was a series of red granite ledges carved by glaciers that when viewed from a specific spot had a distinct image of a stern old man with an easterly gaze. One ledge formed the chin, another his upper lip and a third his nose, with two further layers forming his forehead. When viewed from other locations in Franconia Notch, the same ledges had a rough and ragged look, but nothing that would make you think of 'the profile'. Throughout the 1900's efforts were made to keep the Old Man intact and in 1958 it underwent major repair work for improved weatherproofing. After the collapse, the cables, spikes and epoxy cement used in the repairs and attempts to keep erosion at bay were visible like a skeleton. None of the fallen rock was distinguishable from the other boulders where it fell.

Now, if you go, there is a Profile Plaza with a memorial (all paid for by private donations). There are seven profilers - described as being like upside down hockey sticks with bumpy bits - that when lined up with the cliff will give you an outline of the face as it would have been on the remaining mountain. Not quite the same, but many felt something had to be done for this state icon, to remember what once was.

This 3¢ stamp from 1955 commemorates the 150th anniversary of the Old Man's discovery. For some unknown reason it uses the rarer plural term 'mountains'.  125,944,400 were printed. 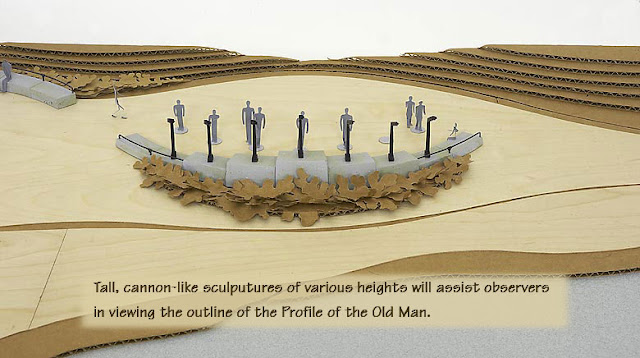 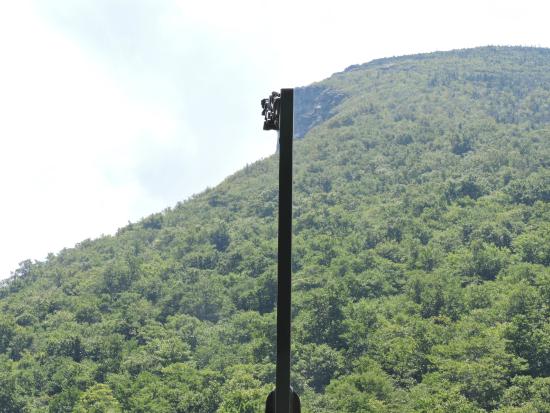