Here is a joint issue Ukraine and Poland featuring Wooden Churches (Tserkvas) of the Carpathian Region. There are sixteen of these churches, with eight on each side of the border. In 2013 these were listed as a UNESCO World Heritage Site 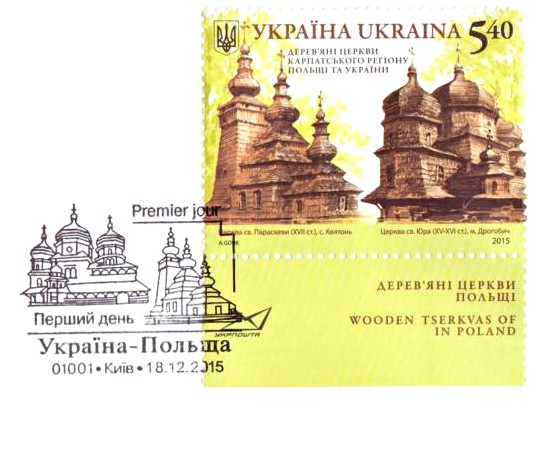 These Tserkvas  are Eastern Orthodox and Greek Catholic and were built of horizontal logs with octagonal domes between the 16th and 19th centuries. The two depicted on this stamp are
the Greek Catholic Parish Church of St. Paraskevi in ​​Kwiatoń Poland built around 1700 with the tower added around 1743 (left)
St George's Church of Drohobych, Ukraine (right). It is the oldest and best preserved church of the region, built around 1500. It was last renovated between 1678 and 1711. 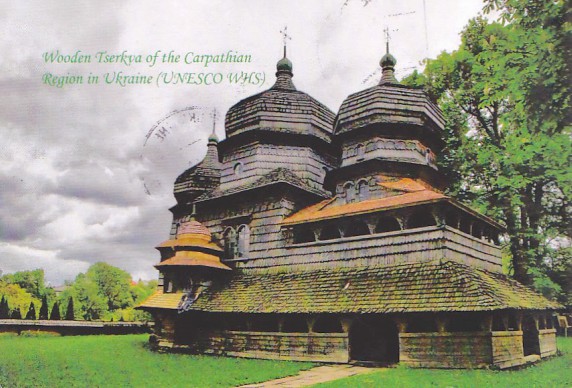 find your way to other worshipful places at Sunday Stamps II
sharing with InSPIREd Sunday
Posted by VioletSky 13 comments:

watch out for pedestrians 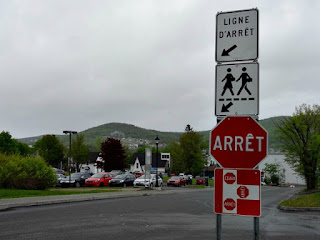 the stop signs all give you precise diagrams of where to stop, and who else at the intersection is expected to stop 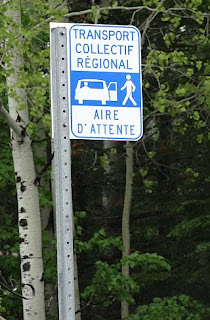 the area I was in was mostly rural and I saw no buses - but there seems to be some sort of car-pooling
these ones in the middle of the road always took me by surprise!
not entirely sure why they are in that location instead of at the side of the road
(chausée partagée means shared road
underneath, it says to watch out for pedestrians) 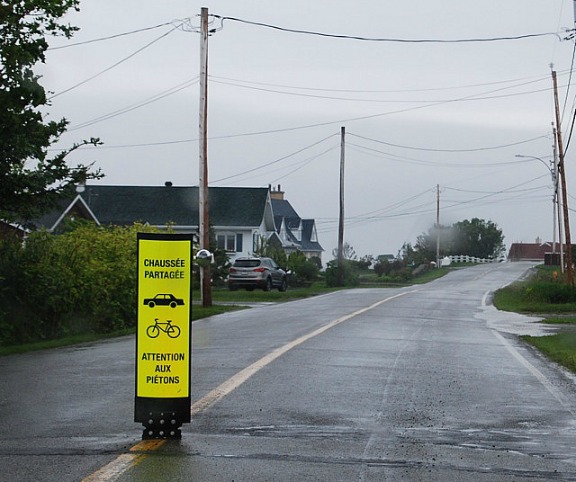 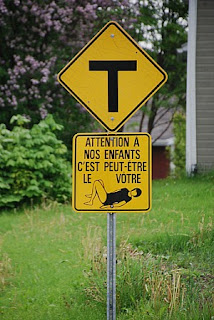 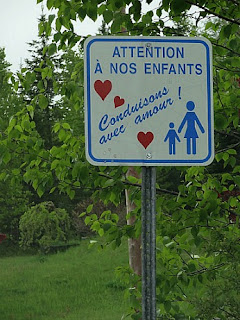 something to ponder for signs, signs
Posted by VioletSky 16 comments:

If you are a carnivore,
then my city was the place to be this weekend. 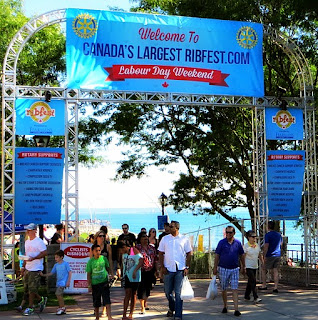 For Burlington is home to
Canada's Largest Ribfest
held at Spencer Smith Park for over 20 years on the Labour Day Weekend. Consider it our way to tastily mark the unofficial end of summer on this holiday weekend.

It can get pretty hot working over the grill 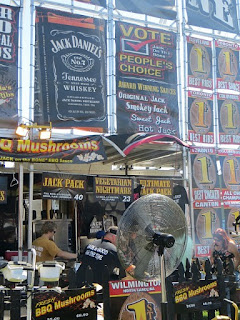 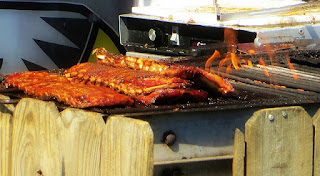 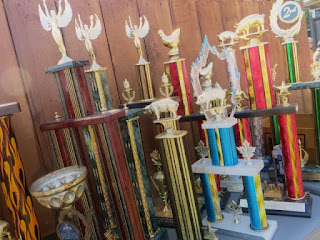 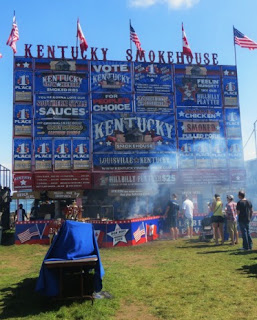 Past trophies are on display and there were 19 ribbers this year. Prizes go out for best ribs, best sauce and best "pig rig".There are long lines for the hungry - I don't particularly like ribs, but I was happy to sample the sauces. My vote for favourite would be the one with apple butter and a taste of Jack Daniels.

and there are other foods, like funnel cakes, beaver tails, and poutine 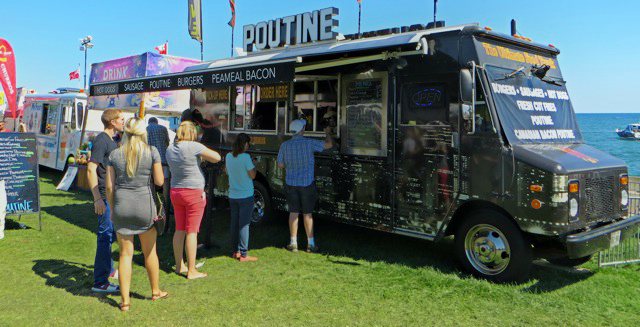 a short walk on the pier and you can get an overall view, but you can't really escape the smoky smell coming off the bbqs. I live five blocks from the park and some years when the wind is blowing in the right direction I am almost tempted to join the queues... 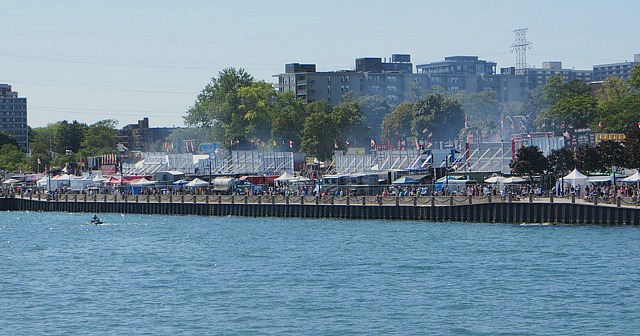 but for this year, it was just a walk around to share the fun with Jo's Monday Walks
Posted by VioletSky 6 comments:

This month, Star Trek will be officially 50 years old. Earlier this year Canada Post put out a special commemorative set of stamps featuring five of the stars of the original series: Captain Kirk, Spock, McCoy, Scotty, and Klingon Commander Kor. Three of these men are Canadian born - William Shatner (Kirk), James Doohan (Scotty), and John Colicos (Kor). The other two are Leonard Nimoy (Spock) and DeForest Kelley (McCoy). Why there are only five stamps and not, say, seven to include Sulu and Uhura is a mystery.  And a huge oversight, in my (and many others) opinion. 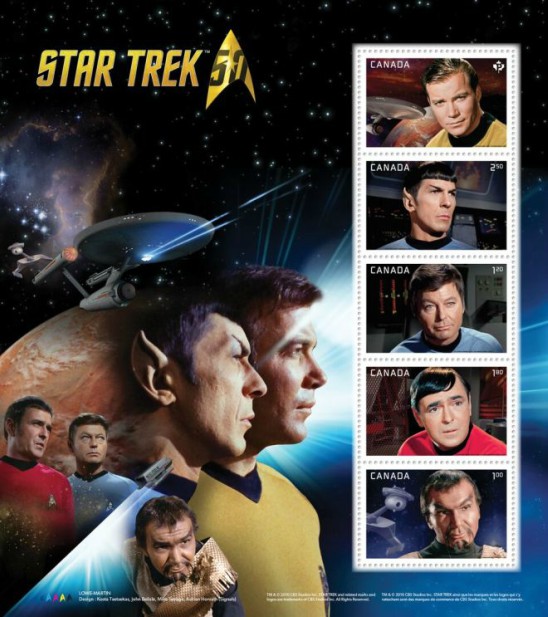 Scotty, "Bones" McCoy and Spock are shown in their respective positions: in the engine room, in sickbay, and on the bridge while
Kirk and Kor are shown with their respective spacecraft, The USS Enterprise and the Klingon battle cruiser

each of which also got their own stamp in this domestic coil (though I used mine all up, so am showing the souvenir sheet here) 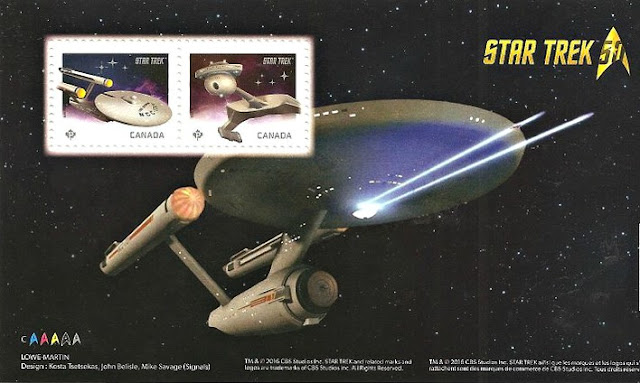 At the very least, every morning, afternoon, evening or late night, you should be able to find an episode of one of the Star Trek shows.
Which does not disappoint this trekkie.
And, in case you are not a trekkie and are wondering, William Shatner (age 85) is the only one of these five still alive. Although, the unrepresented Starfleet Command officers Nichelle Nichols, who played Lieutenant Uhura and George Takei, who was Sulu, are both also still very much alive.

Labels: stamps, stamps&postcards, television
Newer Posts Older Posts Home
Subscribe to: Posts (Atom)
Lately, this blog seems to be all about postcards, stamps and dead people and where they now reside. Sometimes I throw in an adventure story.