The other week I showed photos of Burlington's brand new $15,000,000 pier. It is still too early to have any tourist postcards made, but I do have a postcard of the Million Dollar Pier in Atlantic City. 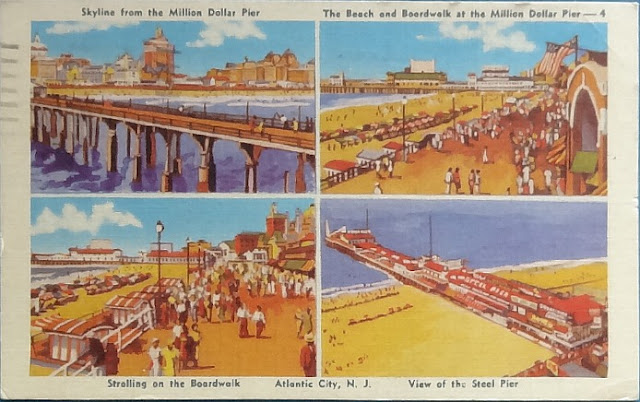 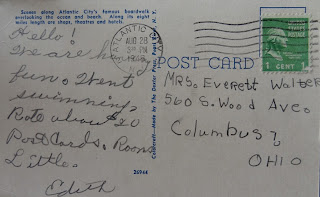 Opened in 1910 and purportedly named for the cost, it was a successful entertainment and amusement venue until a fire amidst the economic times finally resulted in closure in 1981.

The Steel Pier also had a devastating fire in 1982, but has since been rebuilt into an amusement pier again. Built in 1898, it was very popular and had up to 80,000 visitors on some days. It is currently undergoing a $100 million renovation and among the new rides will be a 200' ferris wheel with climate controlled cabins. There will also be a display of some 250 old postcards of the area.


The Million Dollar Pier was 1,775 feet long and built of reinforced concrete and had an aquarium, concert hall, theater, wireless telegraph station, as well as a home for Captain Young [the builder] and his wife. The Steel Pier was 2,000 feet long and for one admission price, patrons could enjoy every film, concert and attraction that included the world's top entertainers of the day.  Burlington's Brant Street Pier - also made of concrete - is only 449 feet into the water and does not have any shops, restaurants or amusements. It does have an observation tower. And it is at the park where free entertainment of festivals and craft fairs and ribfests are held. Still, not nearly the same.
PostcardFriendshipFriday 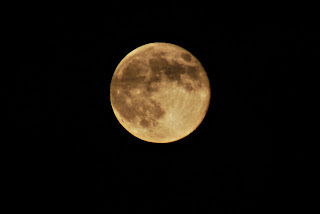 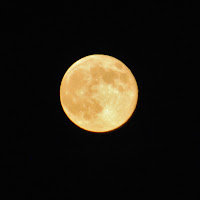 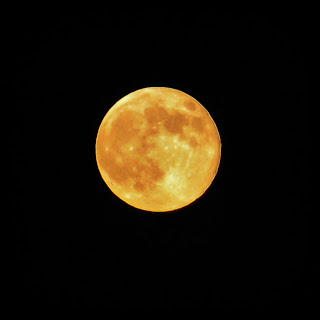 a few versions with a few adjustments (except for the top left) taken around 9:50 pm Sunday night
Posted by VioletSky 8 comments:

Labels: at least I got one good picture, the moon never looked so good 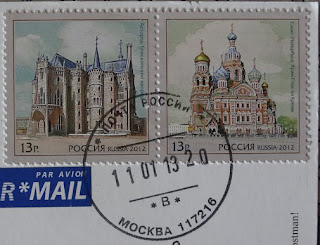 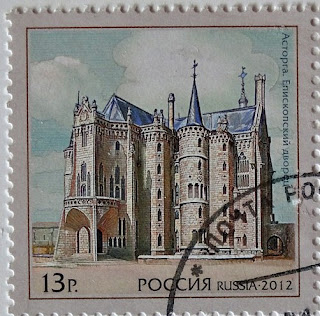 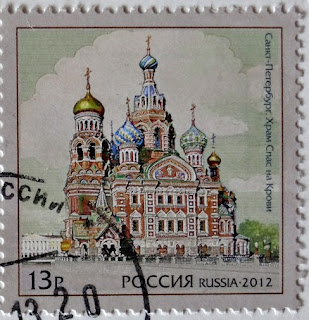 For Sunday Stamps. Click here to see the Spanish version of these stamps.
Posted by VioletSky 9 comments: 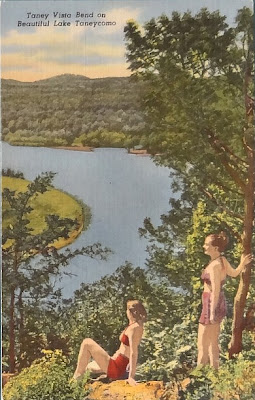 sent in 1910 from Norfolk Virginia 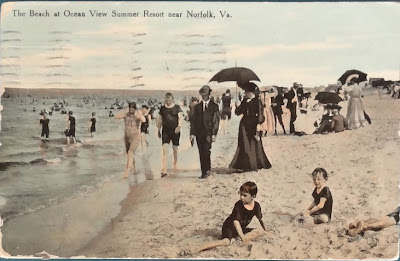 so, do you prefer a beach on the ocean or a lake in the mountains?

The view of the water from my balcony may be diminishing, but every now and then something exciting floats by.... 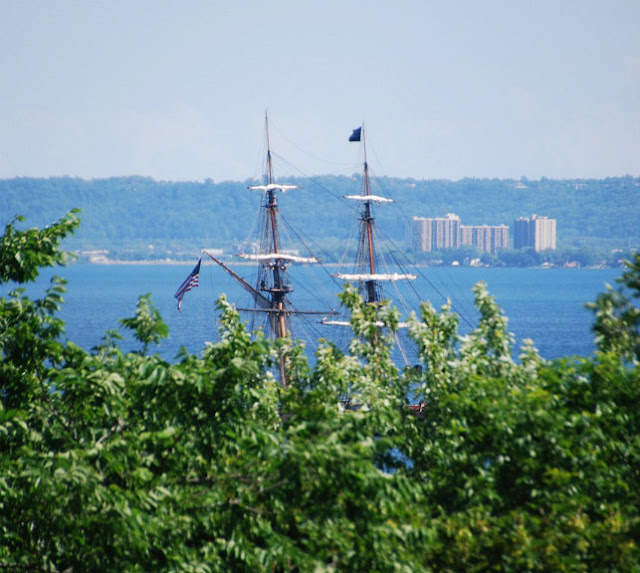 bear in mind this was taken with a zoom lens and cropped a couple of times. 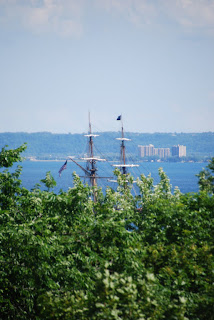 this little corner is all that is left during the summer when the trees are in full leaf.


yes, my life is this exciting at the moment.
Posted by VioletSky 9 comments:

Labels: view from my backyard balcony, where I live

the end of the pier 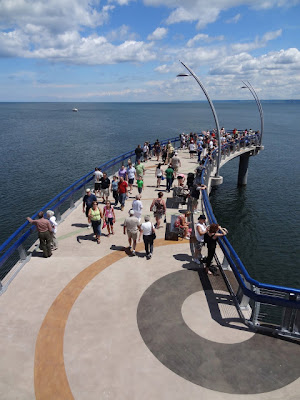 The question on most everyone's mind: "is it worth the $15 million?"

the pier that has been beset with problems, design changes and engineer changes, accidents and lawsuits and counter-lawsuits causing delay after delay.... 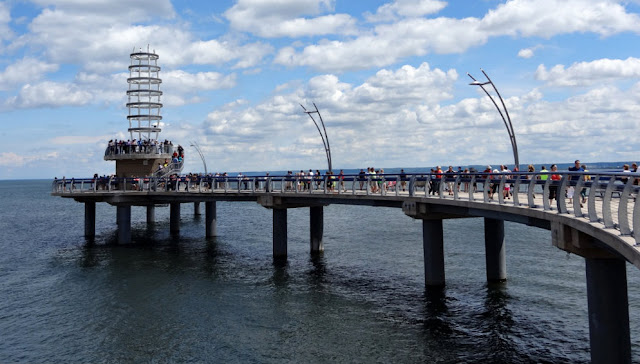 until we all just wanted it to go away. except by then, that would be more expensive than finishing the job. 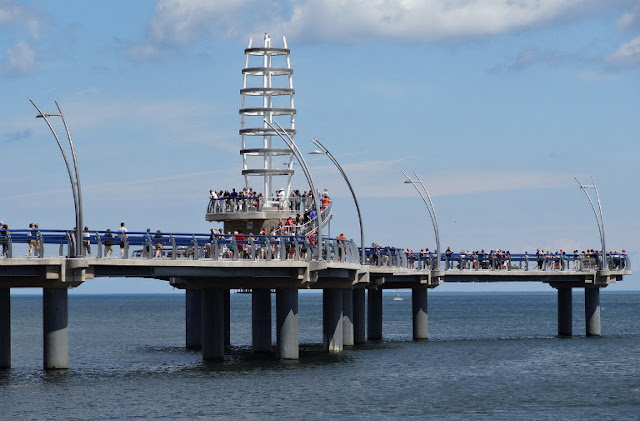 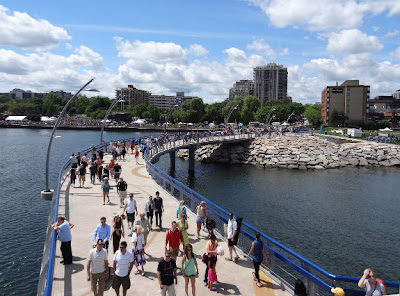 but years behind schedule, and millions of dollars over budget, the construction crew left, the gates came down, and the public were invited to walk the pier! 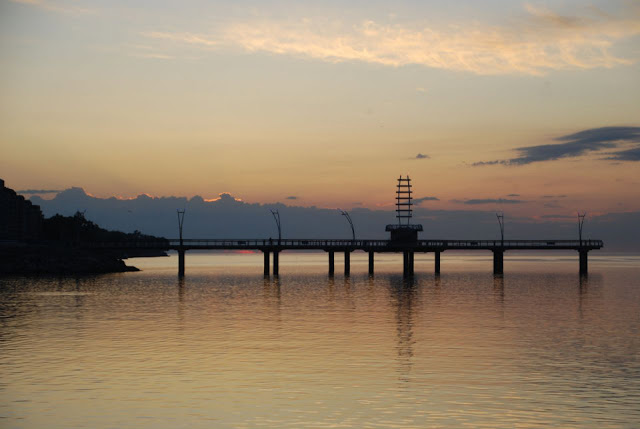 and a new day dawns
Posted by VioletSky 4 comments:

Labels: dollars and sense, where I live

Following on the previous post, yesterday at the stamp market I found the complete set of these 1991 stamps featuring prominent Canadian public gardens

click on any of the links to learn more about the gardens history and amenities, if you are so inclined
some is more entertaining than others 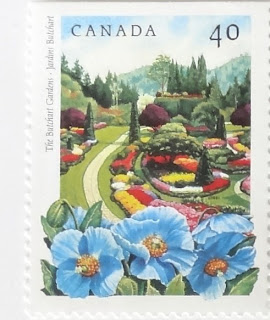 from left to right [west to east] we have The Butchart Gardens, created by Jenny Butchart at Tod Inlet on Vancouver Island. When the quarry started by her husband had been depleted near their house, she decided to transform the site. A massive undertaking, as tons of top soil had to brought in from neighbouring farms by horse and cart. Over the years added to the Sunken Garden was a Japanese garden, an Italian Garden and a Rose Garden. It fell into disrepair during WWII but after the Butcharts passed away in the 1950s, a grandson took over the task of restoring it to its former glory. It is, perhaps, the most famous of the gardens. And yet, I have never been. 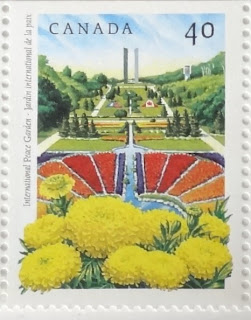 next is the International Peace Garden begun as a testament to the "goodwill, understanding and co-operation between Canada and the US". Located at the exact centre of the Atlantic and Pacific oceans, it borders Boissevain, Manitoba and Dunseith North Dakota and was officially opened in July 1932. This is the only one that is open 24 hours a day and has camping facilities as one of its many features. None of my camping was done in such colourful surroundings! 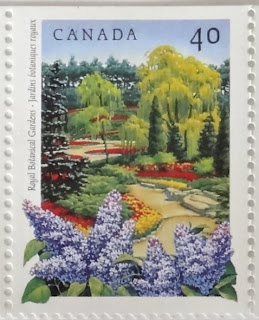 then we have the Royal Botanical Gardens located at the western edge of Lake Ontario bordering Hamilton and Burlington in Southern Ontario. It was created as a 'rival' to Britain's famous Kew Gardens. The original vision was for a mix of horticultural displays and protected natural forests and wetlands. A tract of land on the Niagara escarpment was set aside and hundreds of jobs during the Great Depression were created during its building (as with Butchart Gardens, an abandoned quarry was redeveloped as the Rock Garden). This is my local garden and I've taken advantage of the many programs and activities throughout the park's 1,100 hectares.

The Montreal Botanic Gardens in Quebec are next up. This 82 year old garden is a National Historic Site made up of several thematic gardens and greenhouses. It is at Sherbrooke St at Maissoneuve Park facing the Olympic Stadium. While the gardens are bare during the winter months of November to April, the greenhouses are open year round. A detailed archival history can be found here 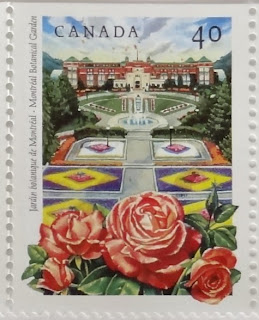 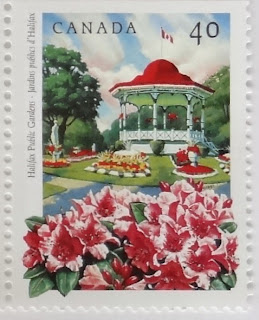 The most easterly garden in this series is also the oldest. Formally established in 1867, the Halifax Public Garden is in Nova Scotia. It began as an amalgamation of two smaller gardens (as well as a bit of wasteland and an estate) near the shopping district of Spring Garden Rd. The 16 acres has a formal Victorian landscaping style and not much of the gardens had changed until 2003 when Hurricane Juan wreaked havoc and destroyed many of the trees. New infrastructure and restoration of the buildings began in earnest and, as is usual for gardens, continues.
Posted by VioletSky 2 comments:

Today, June 14th, is Canada's inaugural Garden Day
it will be a celebration of public gardens and green spaces held every year on the second Friday in June
so, here are three postcards showing public gardens from the west, east and central parts of the country 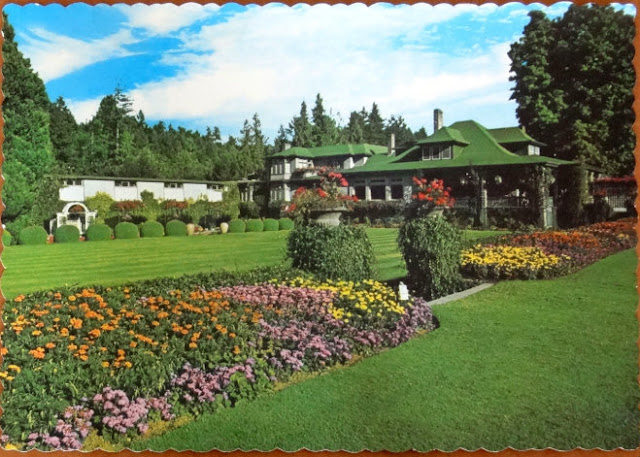 The Montreal Botanical Gardens [Quebec] was founded in 1931 by Brother Marie-Victorin. Occupying 73 hectares within the city, it boasts some 26,000 species of plants. The postcard reproduces a painting of the garden which appeared on a postage stamp issued in 1991. 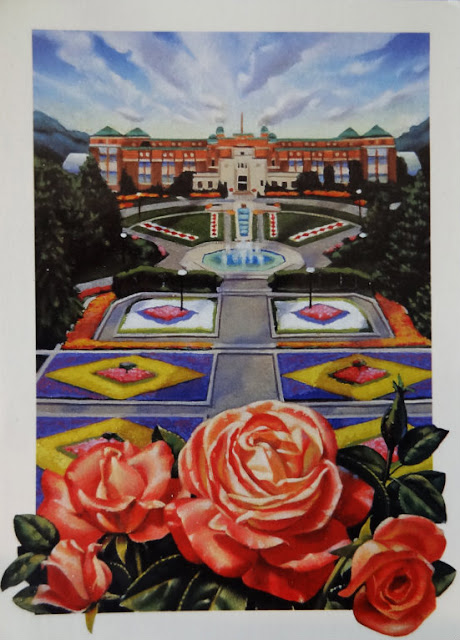 and finally, a Photogelatine card from [perhaps] 1937 showing the Rock Garden at the Royal Botanical Gardens in Hamilton, Ontario 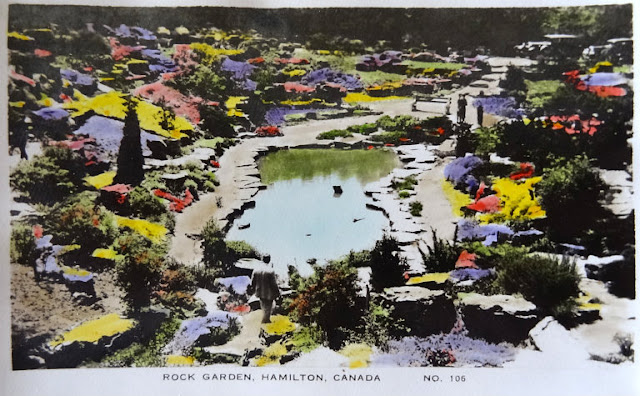 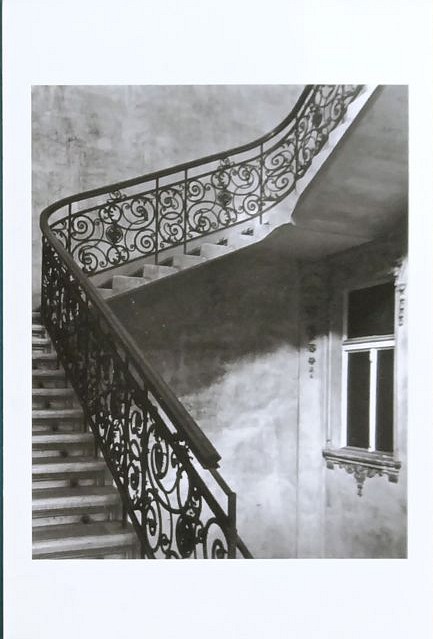 this is a postcard of one of my favourite photographers, sent to Violet in Finland. Apart from the grand sweeping staircase, I love how he has captured the texture of the wall.
Gabor is known for his architectural and street scene photography as well as informal portraiture. Most have been taken in his adopted home of Montreal and his native home of Budapest.

Everything is constantly changing around us: what my camera captures at this moment is already of the past. That is why it is important to me to record the world as I see it today through photography. I am not interested in the past or the future: I am interested in the present. Through the photographic image, I can directly record the signs of the past and the future as they appear in this moment.”
— Gabor Szilasi, 1977

so I was pleased to see that he was featured in the first of a new series of stamps celebrating photography,
the image chosen for the stamp is of Andor Pasztor, a friend of his father. this was taken during a period when he created diptychs with a black and white photo of the sitter and a colour photo of the room in which the photo was taken. 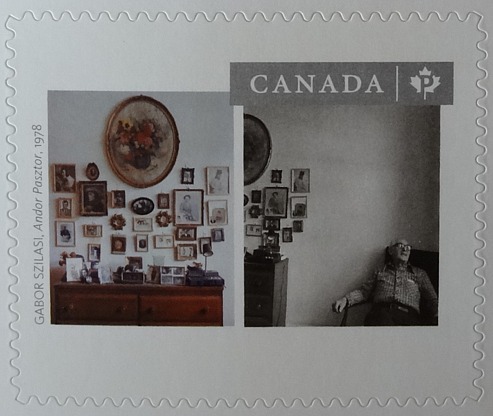 I am a little disappointed that this stamp is perhaps the weakest of the series
in that it is more difficult to see the image. all the stamps are the same size - 30mm x 36mm
Gabor Szilasi was born in Budapest and left Hungary in 1957 to eventually settle in Montreal.
Posted by VioletSky 17 comments:

Labels: Absynthe's Postcrossing adventure, postcards, stamps, stamps&postcards
Newer Posts Older Posts Home
Subscribe to: Posts (Atom)
Lately, this blog seems to be all about postcards, stamps and dead people and where they now reside. Sometimes I throw in an adventure story.