kumo and a cathedral 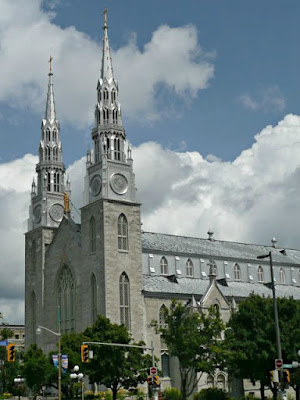 This is the Notre Dame Cathedral Basilica in Ottawa.
It was built in 1846 with the two gothic spires added in 1866.

They are covered in tin, which is a common feature for French Canadian churches.

In between the spires is a gilded Madonna. 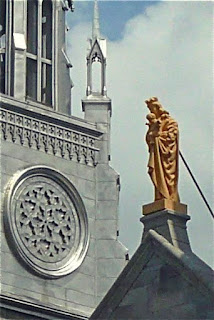 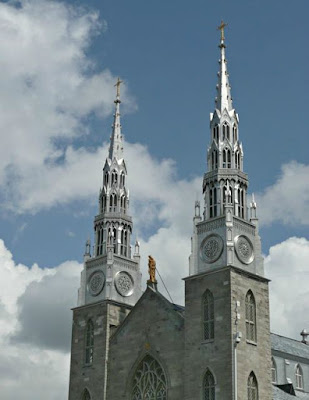 and, for a special Canada 150 event, by special permission of the Archbishop,
a giant spider will spend the night atop the Cathedral 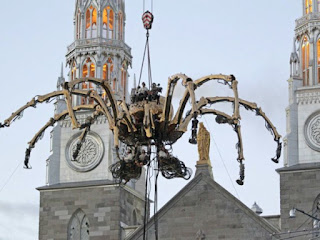 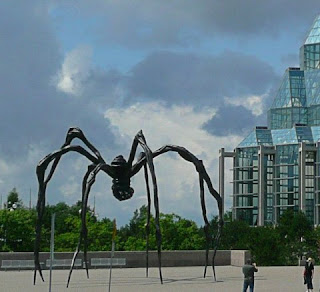 Yeah, Ottawa already has a giant spider, living right across the road at the National Gallery, a sculpture by Louise Bourgeois
but this is a giant mechanical spider. named KUMO. 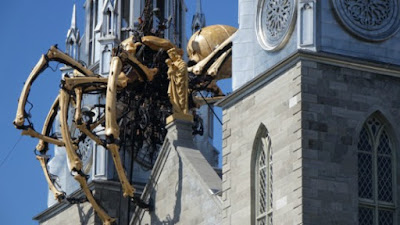 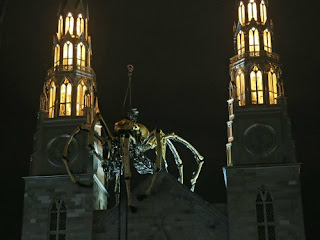 She
slept on top of Notre Dame and was awakened on Thursday evening. On Friday morning a giant fire breathing dragon was woken up amid a weekend of traffic snarls around this urban roaming theatre.  You can see a three part video of the awakening (complete with an orchestra suspended in cages and puppeteers rappelling down ropes onto their positions on the spider to make her move. it's a long video, but fast forward and you'll see it's pretty cool!)
All we got in Toronto was a giant duck... and me, an affirmed arachnophobe, I wish I could have been in Ottawa for this.
You can read all about La Machine and the exciting weekend here. But if you want to see this street theatre you need to be in Ottawa from July 27-30th.  The basilica, however will always be there for you to see. On Sussex Drive.

fast forward to around the 9 minute mark

a bridge to cross 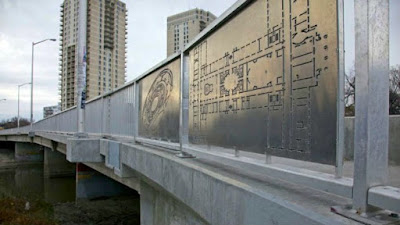 The Osborne Street bridge in Winnipeg had a makeover recently and incorporated in its design was an art project that included phrases cut out (and lit at night by LED, which you can almost see in my dusk photos)  Here are a few of these balustrades as I walked across the bridge 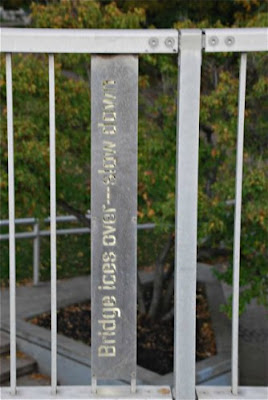 Bridge ices over – slow down

The phrases all relate to the area 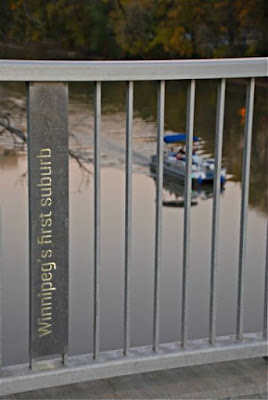 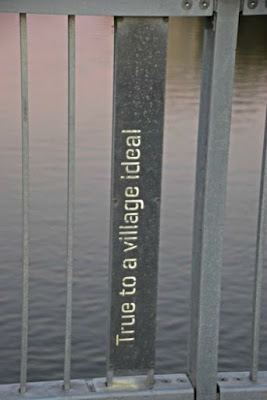 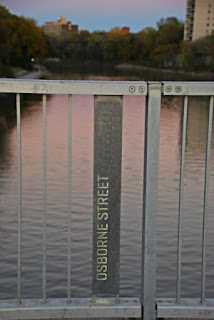 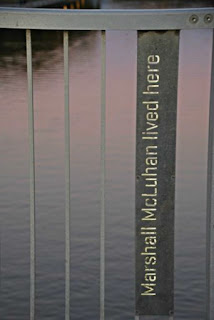 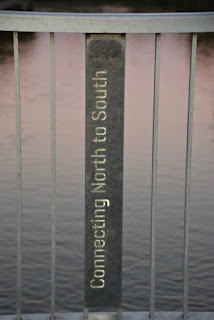 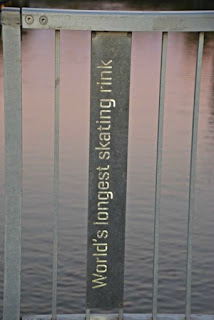 It crosses over the Assinboine River 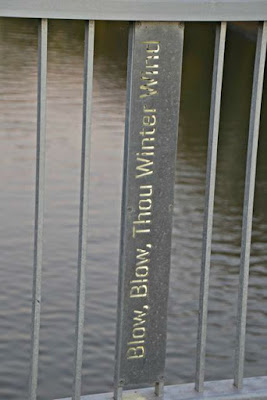 Winnipeg is known as a windy city, and the corner of Portage and Main is the windiest intersection in Canada 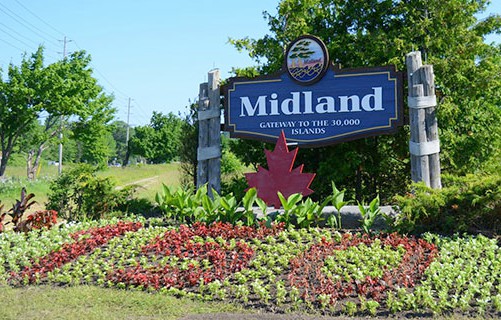 Went for a day trip to Midland last week 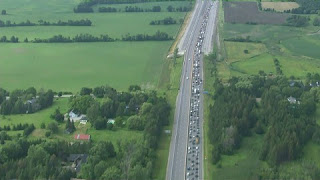 (not on the day thousands were trapped on the highway when it was closed for 11 hours due to an accident, thank god!)   (photo courtesy of cp24 news)
The harbour has changed a lot since the days in the early 1900s of this postcard 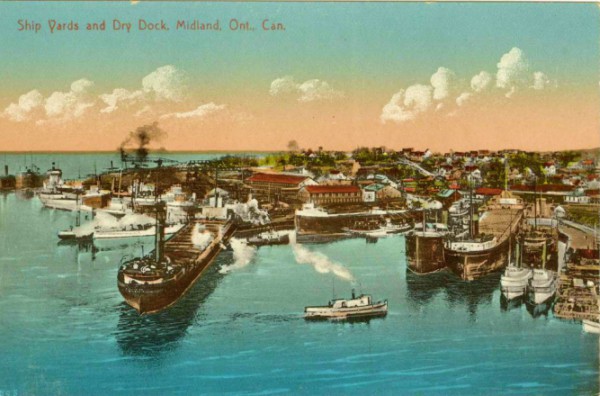 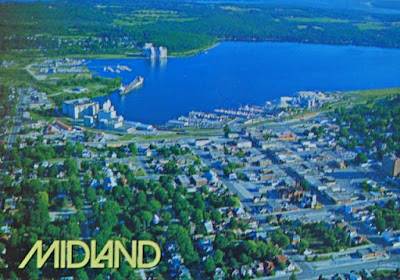 it's on the southern tip of Georgian Bay 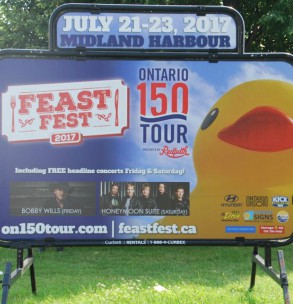 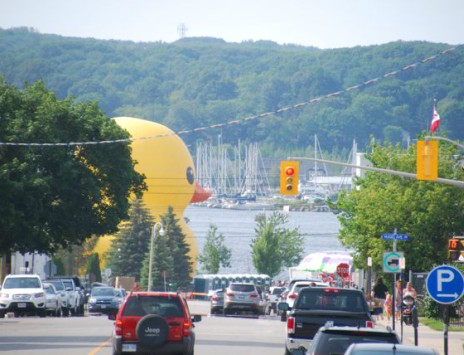 The giant rubber ducky that has garnered so many complaints from those who have no desire for fun and silliness in their lives. This was her first visit to Canada and she made her appearance for the Canada 150 celebrations.  (just google rubber duck toronto and scroll past the newer stories of how spectacularly successful it was to the weeks before she arrived and read all the whining about the cost, what a duck has to do with Canada's sesquicentennial, the cost! ... ad nauseum) 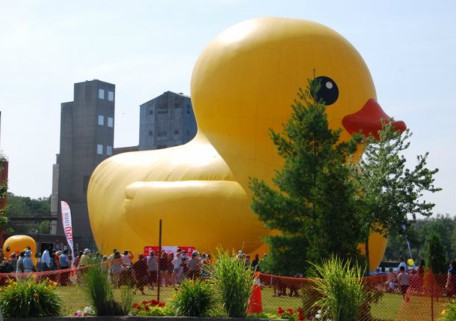 She is big. Six storeys tall. It takes almost 3 hours to inflate. 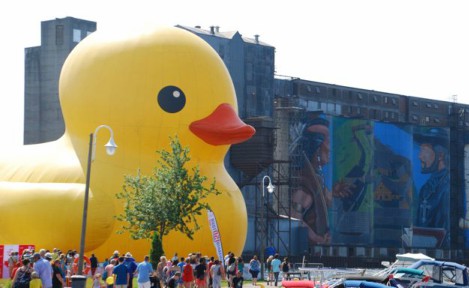 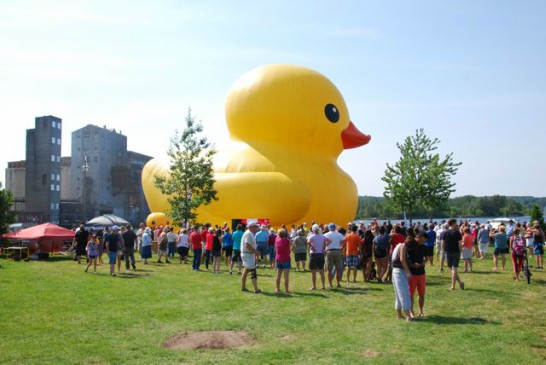 Keeping the duck company is this swan sculpture
which celebrates the efforts of those who helped reintroduce the trumpeter swans to Georgian Bay. The swan sculpture is more life size. 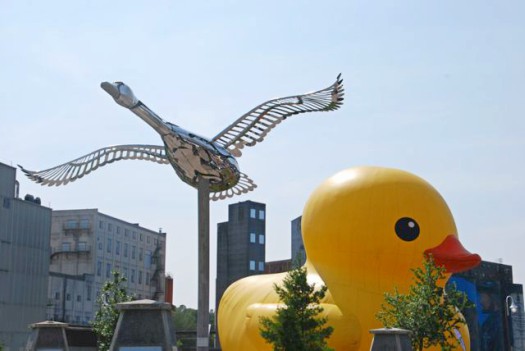 We didn't see any swans, though 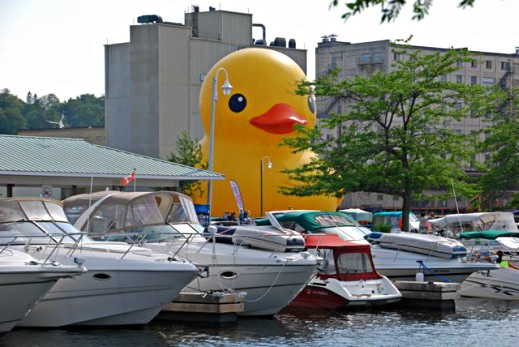 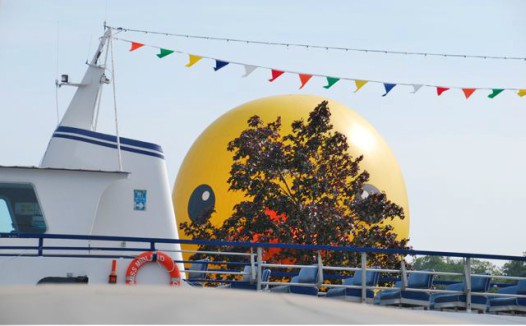 Then, we walked round town looking for murals, but that will be another post. I'm reintroducing myself to short walks for Jo's Monday walk
Posted by VioletSky 24 comments: 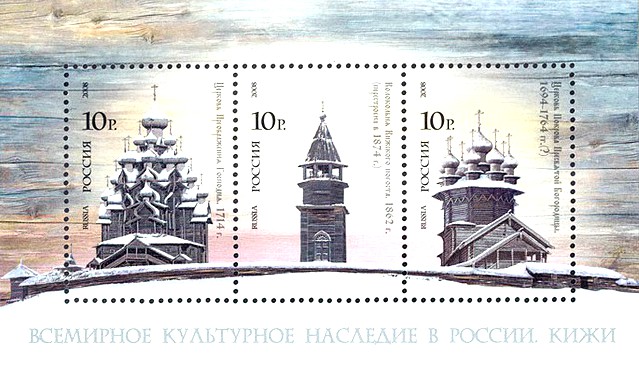 In the far north-western corner of Russia is the Republic of Karelia.
In Karelia is a lake, called Lake Onego.
In the middle of that lake is an island called Kizhi.
On Kizhi is a "pogost",  a settlement or churchyard.
And in that pogost, are two wooden churches and a bell tower.
The church on the left has 22 domes while the one on the right has nine. The smaller church is known as the Church of the Intercession. It is heated and is therefore used as a winter church (October to Easter), whereas the larger church - the Church of the Transfiguration - is not heated and is only used during the summer months. Both churches date back to the 18th C and are built entirely of wood - no nails! Along with the belfry, these structures were built of pine (the main structure), spruce (roof) with aspen covering the domes. This pogost is an UNESCO World Heritage Site with the island and its open air museum of 87 other buildings (including more wooden churches, barns, mills, houses and saunas) brought to the island is a Russian Cultural Heritage Site. 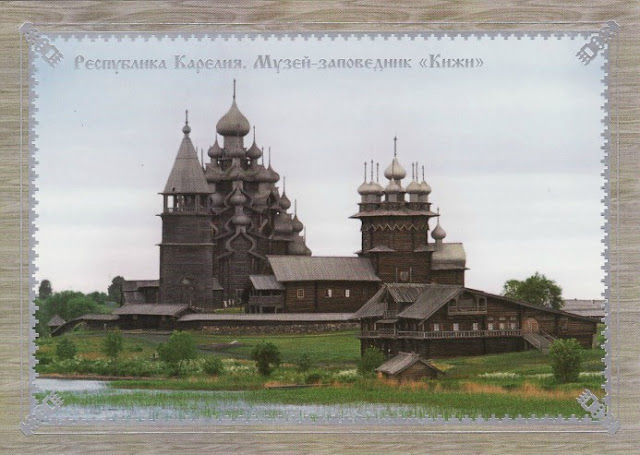 So, apart from the Moscow Metros from last months post, this is one place I would love to see. (yes, I have thing for Russia!)
Sunday Stamps II
Inspired Sunday
Posted by VioletSky 9 comments:

Labels: Absynthe's Postcrossing adventure, architectural delights, churches, stamps&postcards, what I learned from Postcrossing
Newer Posts Older Posts Home
Subscribe to: Posts (Atom)
Lately, this blog seems to be all about postcards, stamps and dead people and where they now reside. Sometimes I throw in an adventure story.