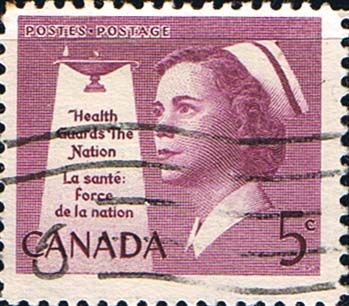 Health Guards the Nation.  This 1958 stamp was the first one designed with a living model 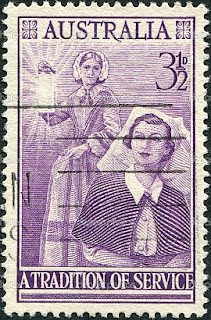 A Tradition of Service
more nurses
this Australian stamp shows Florence Nightingale (1820-1910) in the background behind a contemporary nurse of 1955. 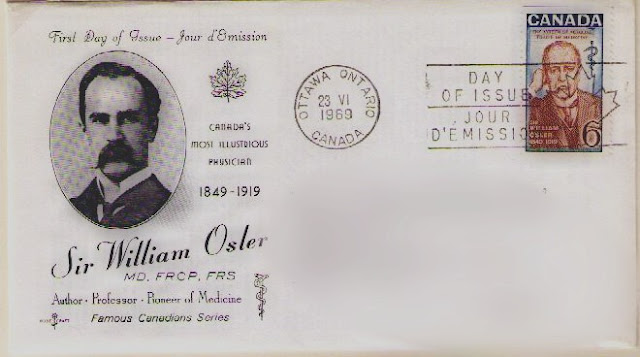 considered one of the finest diagnosticians of his day, he created the first residency program for specialty training of physicians, and he was the first to bring medical students out of the lecture hall for bedside clinical training.

Germany has issued a series of definitive stamps for "Women in Germany" for an astonishing 17 years. The first stamp (with Clara Schumann) was issued in November 1986 and 38 women later the series ended with political activist Marie Juchaz, in January 2003. In 2005, the current flower series of definitives was started. If you are so inclined you can read about each of the women featured on the stamps here, though there are no pictures of the stamps.

The series began with West Germany, continued through the unification and eventually through the currency change from marks to euros. The stamps were designed by Gerd and Oliver Aretz, and each shows a sketched portrait of a woman famous in Germany.  Since not all of the women were actually born in Germany, the title of the series is Women in Germany.
These four women were amongst about two dozen stamps generously sent by a German postcrosser.
Two are from the Federal Republic of Germany and show the value in pfennig;
two are from the unified Germany, with one showing the value in pfennig and euros and the other only in euros. 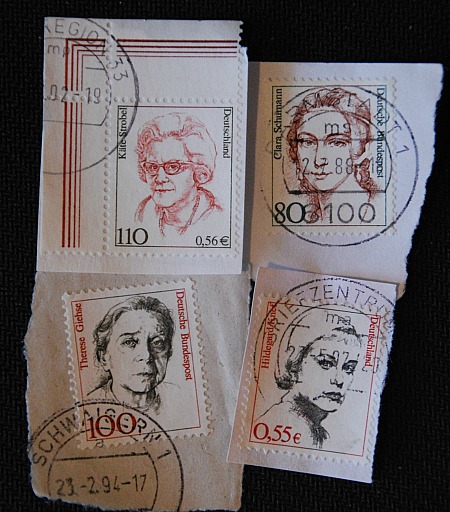 starting top right and moving clockwise,
the Clara Schumann (13 September 1819 - 20 May 1896) stamp (value 80 pf) was issued on November 13, 1986. She was a pianist and composer, although for many years she was not widely recognized for her compositions. Trained by her father to play by ear and to memorize, Clara was one of the first to perform publicly by memory. Her personal life was marred by tragedy - her husband, the composer Robert Schumann, and four of her eight children died before her (Robert and one of their sons died by suicide in an insane asylum) and she was left to help raise several of her grandchildren. She continued to give performances until 1891 and was deaf by the time she died of a stroke at age 76.

the Hildegard Knef (29 December 1925 - 1 February 2002) stamp (value 0,55 €) was issued December 27, 2002. She was an actor (stage and screen), singer, and writer (songs, as well as books and magazine articles). Among her more than 50 films was one called The Sinner (released in 1950) in which she had a brief nude scene that caused a scandal at the time and would later derail her Hollywood career. By the 1960's she had moved on to singing and had 23 records, writing several of her own songs. She was well-known for her "dusty voice" which was probably due to her long smoking habit. She died of a lung infection and suffered from emphysema.

the Therese Giehse (6 March 1898 - 3 March 1975) stamp (value 100 pf) was issued on November 10, 1988. She was an actress on stage, screen and in political cabaret. Being Jewish and left wing, she left Germany for exile in 1933 and would later marry the homosexual writer John Hampson in order to obtain a British passport. She was also good friends with German writers Thomas Mann and Bertold Brecht

read about more women honoured on stamps by visiting See it on a Postcard
Posted by VioletSky 6 comments: