The main thing I knew about sisal is that the smell always gave me a massive headache. I used to manage a store that carried a lot of sisal baskets and rugs and had to arrange to have those placed far off in the corner. 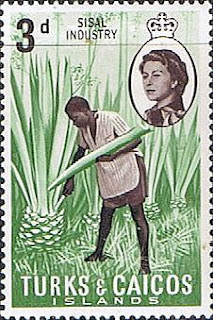 1967
The sisal fibre is traditionally used for rope and twine but also has many other uses, including paper, cloth, furniture and, even dartboards.
Sisal fibre comes from the agave plant and grows in a variety of hot and dry climates that are unsuitable for other crops - like Turks and Caicos, where fruit and vegetable crops had failed. From the first production companies in 1890 until around 1919, sisal export was a booming business in the islands. After harvest, its leaves are cut and crushed in order to separate the pulp from the fibres.  It is a coarse, hard fibre not suitable for textiles or fabrics, but it is strong, durable and stretchable. It also does not absorb moisture easily, resists saltwater deterioration and the texture accepts a wide range of dyes.
Polypropylene, a thermoplastic resin, is reducing demand for sisal rope which could have been disastrous for the industry, but new uses have been found and now sisal can be found in specialty papers, filters, wall coverings, carpets, mattresses, and as a reinforcement in plastic composite materials for furniture and automotive parts. It's also being used as a substitute for asbestos in brake pads. And then there are those dartboards where it's been found to be the best material. Quality dartboards are made of sisal fibres; less expensive boards are sometimes made of cork or coiled paper.
Even the by-products from the sisal extraction are used for making biogas and pharmaceuticals as well as for fertilizer and animal feed.

have a look for other industrial strength stamps here
Posted by VioletSky 12 comments:

Although Southampton sits right on Lake Huron, there is also a smaller, littler lake at the eastern edge of High Street. 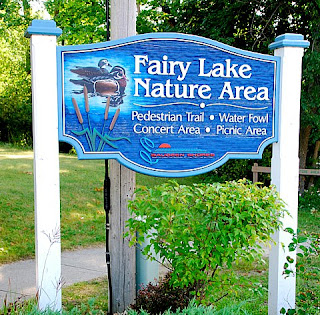 First, we come to the brand new stage 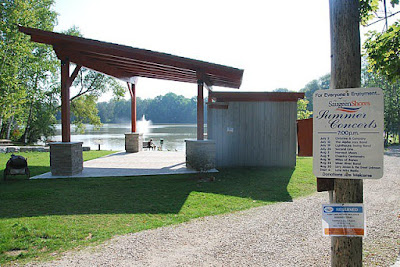 where Sunday concerts are held all summer. I listened to a bluegrass band on the one Sunday I was in town, but there is a band for every musical taste if you can attend any Sunday evening. Bring a chair, or blanket and sit back and enjoy! 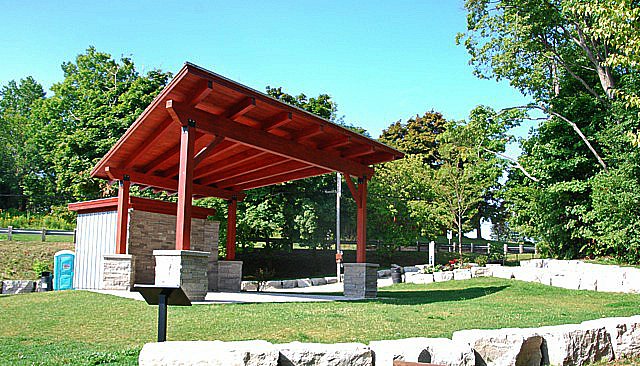 The concert area is very nice, and a big improvement over the temporary blue tarp clamshell that was there. But, while one is always grateful for toilet facilities, I can't help thinking that perhaps a matching permanent structure would have complemented the new stage.

Surrounding the lake is a nature path that is easy to walk, and doesn't take very long. 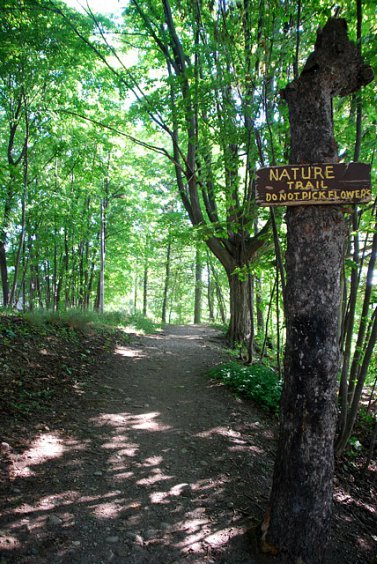 the lake is behind the Bruce County Museum 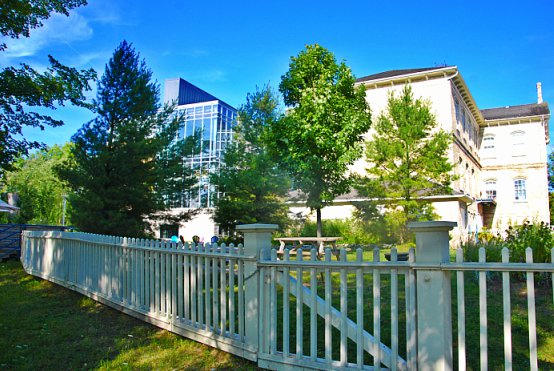 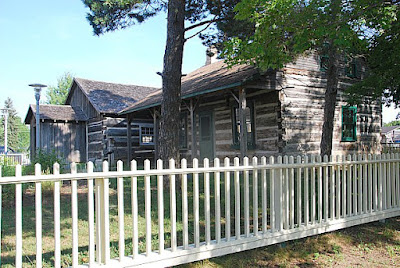 if you have a keen eye, you may spot some basking turtles 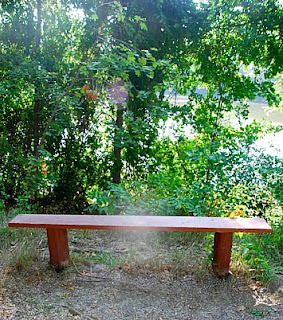 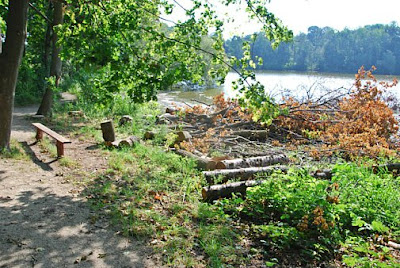 bowing down to the water 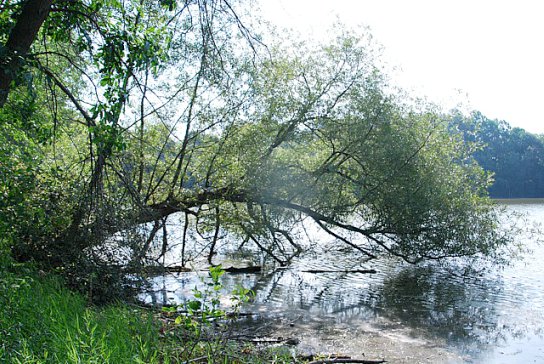 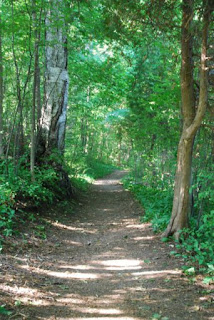 Although I deliberately made a point of walking this trail early in the morning, it was already getting very hot. The dappled shade was most pleasant and welcoming

The only 'memorial' was this stone 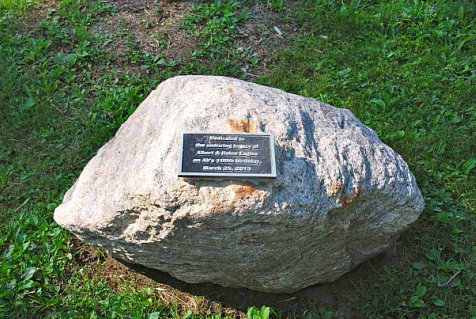 Dedicated to the enduring legacy of Albert and Helen Eagles
on Ab's 100th birthday March 28th, 2013.
I did some research when I got home to a computer and did not see any death notices for Ab, so this year he celebrated his 102nd birthday. For his 101st birthday there was a facebook page and website dedicated to 101 ways Ab has made a difference in the world. Ab was in the lumber and building supplies business and retired in 1997. The Eagles have family and friends flung far and wide and as I continued walking, I daydream that had I lived in Southampton (which I almost wish I do) I, too, would have known them. 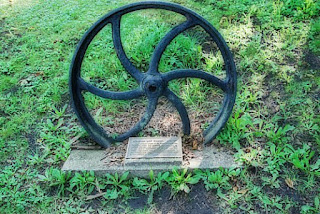 Fairy Lake supplied water for a tannery that was built in 1880. But, in 1900, there was a devastating fire and it was never rebuilt. This wheel was dredged from the lake in 1983. 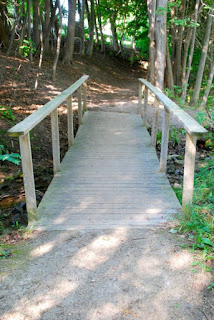 We have almost made it around the lake
and while I was disappointed at not seeing the two swans, or the egret, I did catch some mallards flying away 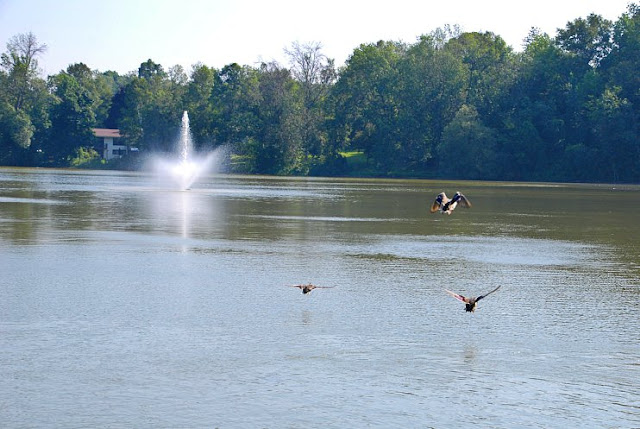 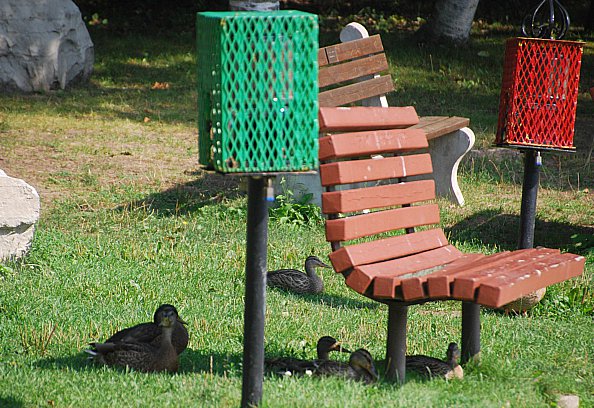 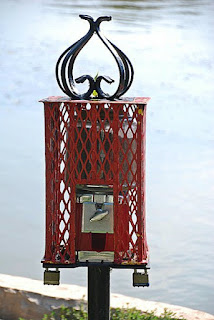 and for a quarter (.25¢) you can buy some corn feed for the ducks (the green ones seem to be newer ones and lack the decorative finial)

and finally,
here is a view from a previous walk showing the old bandshell that matched the water tower 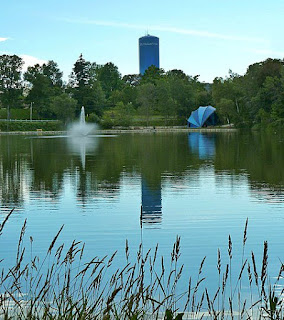 for a Monday Escape,
a little walk around a little lake for Restless Jo
with a few signs for Lesley

I'm glad to be able to show off this sheet of bridge stamps because maybe now I can actually bear to part with them.
These self adhesive stamps were issued in April 2005, at the domestic rate of 0.50¢ 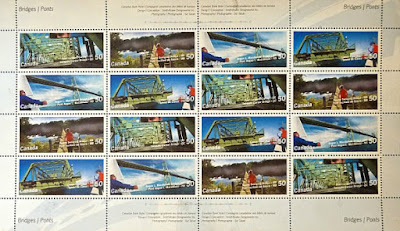 According to the Stamp Details magazine, they "add up to a celebration of geometry and perspective".


The sense of motion in the stamps is deliberate, designed to convey the purpose of these grand structures.  "Bridges are built for people to use," says Stephen Boake, the creative designer.  "While their engineering and design features are interesting, we wanted to show how people interact with these bridges every day."
As a result, individuals in action appear in each of the four stamps, some more prominently than others.  For example, you may look twice at the Jacques Cartier Bridge stamp before catching the driver's reflection in his rear-view mirror.
"Our approach to design is collaborative," says Boake, who worked closely with the photographer Sid Tabak on this project.  Photographs of each bridge were taken on site, then digitally manipulated to obtain the human perspective the team was looking for.  In the case of the Jacques Cartier Bridge, a composite image was created by including the rear-view mirror from a photo taken in Toronto.  The effect is simple but dramatic -- without a windshield, car hood or other evidence of a vehicle, the viewer sees the bridge through a driver's eyes.

It's a very modern image for a structure that celebrates its 75th anniversary in 2005.  The Jacques Cartier Bridge spans the St. Lawrence, connecting the Île de Montréal with Longueuil on the river's south shore.  This well-travelled route carries more than 40 million vehicles a year.
The high-speed experience of crossing the bridge is conveyed through a stamp image that's slightly askew, the horizon off its axis.  "We tipped the image to add a dynamic quality, and angled the type to accentuate this sense of motion," says Boake.
This strategy is repeated in the two stamps depicting bridges in Nova Scotia.  The Angus L. Macdonald Bridge spans Halifax Harbour, linking the city of Halifax with Dartmouth on the opposite shore.  Named for the provincial premier who initiated its construction, it opened 50 years ago as one of the longest suspension bridges in the world.

The stamp portrays this busy city and harbour with a view of the Macdonald Bridge from the deck of a sailboat passing beneath it.  The converging angles of bridge, horizon and type offer a vivid sense of traffic speed and wave motion.  But the image was actually assembled from an on-site shot of the bridge and a sailboat photographed elsewhere.
On the stamp celebrating the 50th anniversary of the Canso Causeway, the angled type underlines the fact that the bridge itself is moving.  The 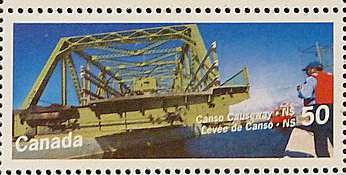 causeway connects the Nova Scotia mainland with Cape Breton Island through a fixed link of rock built up from the ocean's floor.  A swing bridge at its northern end opens to accommodate sea traffic.  The stamp shows the bridge closing behind a Coast Guard ship that has just passed through, another composite image digitally assembled from two different photos, both taken at the scene.

But there's no digital trick to the mist hovering over the Souris River. 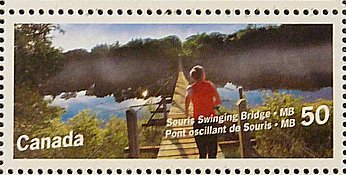 The stamp showing the Swinging Bridge in Souris, Manitoba, is based on an early morning photograph taken on the bridge, which since 1904 has provided residents across the river with a footpath to the centre of town.  "We had arranged to photograph a runner on the bridge, and when we arrived, the mist was already there, with this wonderful light," says Boake.  The design team accented this play of light in the image with intense colours that contribute to a sense of peaceful, early morning clarity. 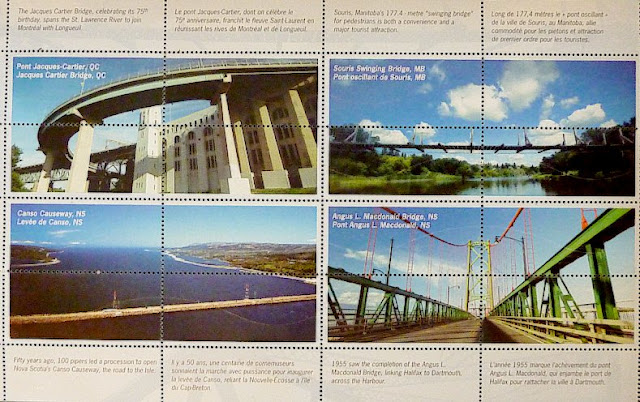 On the reverse side are these complementary self adhesive images of the same bridges with a brief description, in French and English.

and, for a human interest story, you can check this link to a recent cat rescue from under the Jacques Cartier.

travel over to See it on a Postcard for more for more bridges
Posted by VioletSky 7 comments:

Here are two more of the 1976 gemstones stamps from Botswana.
Agate forms when gas bubbles trapped in solidifying lava become filled with alkali and silica bearing water.  The alkali attacks the iron in the surrounding lava and bands of the resulting iron hydroxide are created in the gel which loses water and crystallizes, leaving the bands intact.

Pink Agates are unique to Botswana
and Moss Agates aren't a true agate since they don't have the banding pattern, but they are traditionally known as agates since they have more than one colour. 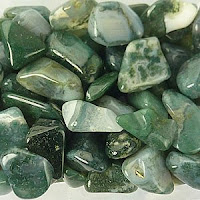 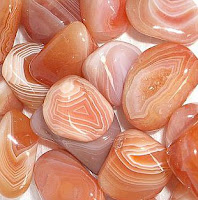 Looking at these gemstones in their raw state, it can be difficult to imagine how they would look in a polished state.

or,
in the hands of a very skilled jeweller 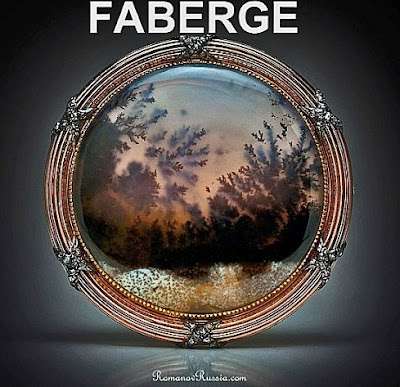 see more gems from around the world SundayStampsII
Posted by VioletSky 3 comments: 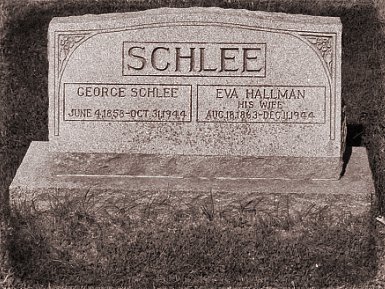 George Schlee was one of the more active builders in Berlin (now known as Kitchener) Ontario at the turn of the century. After apprenticing as a stone mason he purchased a construction firm and became the main contractor for building imposing residences and civic buildings, including the original Kitchener-Waterloo hospital and the Walper Hotel and Zion Evangelical Church. Following a visit to the US he returned home filled with enthusiasm for the potential in the manufacturing of rubber footwear and founded the Berlin Rubber Company in 1899 and later the Berlin Button Works in 1906.

This was his house that he built in
Kitchener

and the cottage he built in Southampton 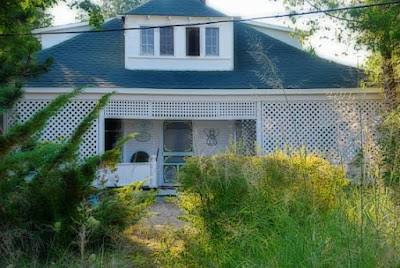 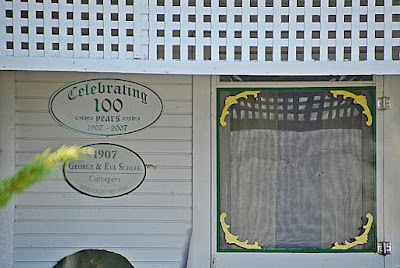 Built in 1907 by a Swiss couple, George and Eva Schlee, the Daisy has withstood the test of time and the storms that roll in off Lake Huron.  "In 1944, Ruth Van Pelt Runyan, was strolling along the boardwalk when she noticed a for-sale sign in front of a cottage.  It opened immediately on to the sandy beach of Southampton and had a wonderful yard and veranda.  The asking price was $4,000 ... a large sum given the year, but she and her husband, decided to take the leap and purchased the cottage."  Now, 62 years later, the Runyan family is still spending summers in the Daisy.  A wrap-around veranda provides a cool breezeway on hot summer days while the interior and furnishings are reminiscent of days gone by.  "The kitchen floor has a definite slant and the wicker furniture is original," points out Marjorie Runyan, 87.  "I remember a time when the beach was all natural with beautiful sand dunes, but all that has changed.  Some politician, in his or her wisdom, decided to strip the beach of the dunes in the name of progress and now we have the eternal problem of blowing sand that fills every nook and cranny.  I studied geology when I was at university and I can't understand why the beaches are being treated this way."
(source, The Saugeen Times)

This post all started by taking a photo of this bench, and the cottage behind. 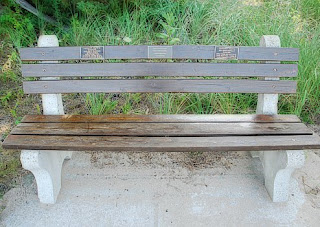 for signs,signs
and image-in-ing
Posted by VioletSky 17 comments:

Labels: benches, gravestones, signs
Newer Posts Older Posts Home
Subscribe to: Posts (Atom)
Lately, this blog seems to be all about postcards, stamps and dead people and where they now reside. Sometimes I throw in an adventure story.