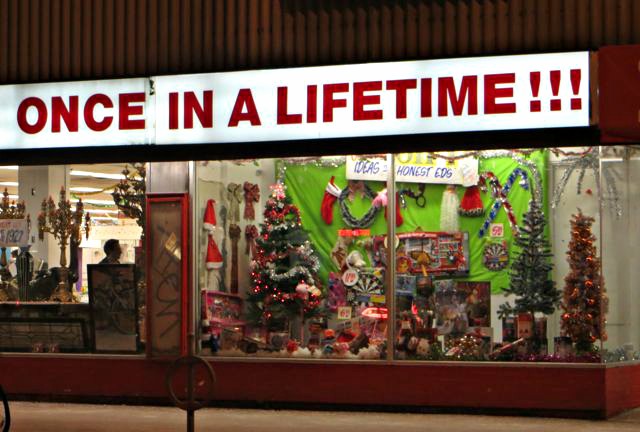 for the end of an era 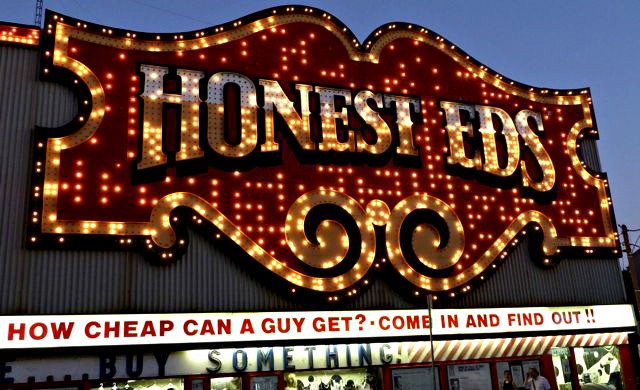 of a giant discount store. 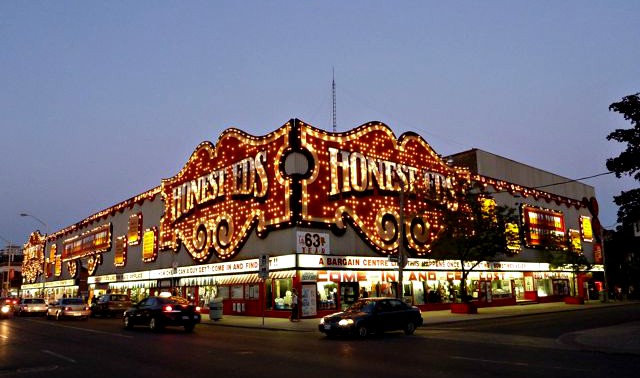 the store lit up 5 years ago (above) and today (below) 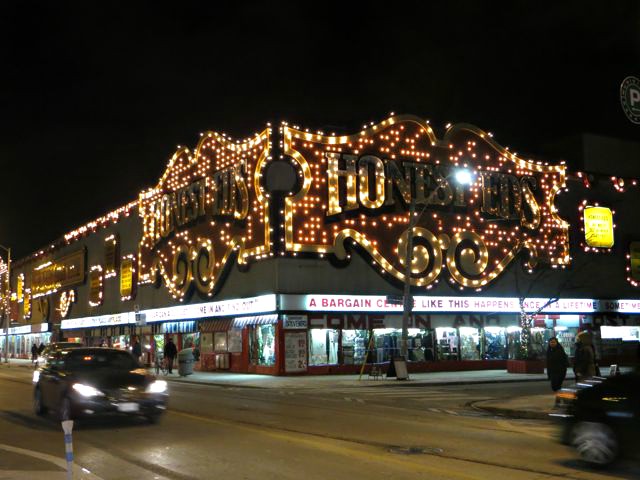 By now, many of the lights have burnt out. No one quite knows what will become of the iconic sign that has been a part of this corner at Bathurst and Bloor since what feels like forever, but has really only been since the early 1980's - though the store itself has been there for 68 years. 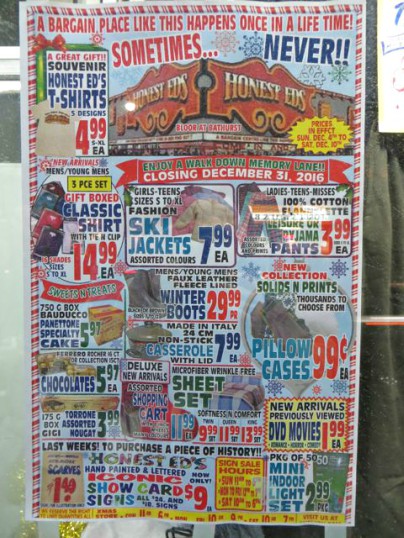 Long before the ubiquitous Dollarama and other dollar stores, Honest Ed's was the place to go for cheap deals.

As you can no doubt guess, Ed Mirvish was larger than life with a personality and generosity unmatched by anyone else in the city. (he died in 2007)
He sold pretty much anything you could possibly need
from the tacky... 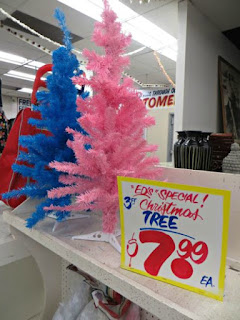 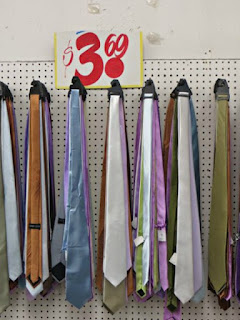 a bit of a backstory here is needed - Ed was also a theatre impresario and with his Royal Alex Theatre in an unlikely area of town near the railway tracks, he also opened up several restaurants in the area to attract people. One of them was Ed's Warehouse, and if you wanted to dine there, you (well, the men only) had to wear a jacket and tie. No worries if you were neglectful - a closetful of old ties and jackets was available for your choice to borrow! 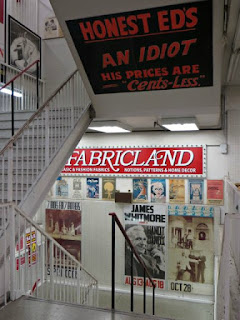 The store had shrunk in size over the years, and the maze of aisles and corners and stairways to get out of the place is long gone as other businesses leased space in the massive building and as stock decreased over the three year closing.


By the time I went for one last walk around, things had been well picked over and there was an empty, sad, it's-time-to-go feel to the place. The things left for sale weren't particularly memorable. Though you could buy a t-shirt (and yes, I did) 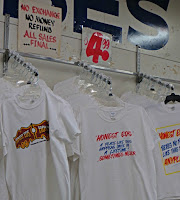 And then there are those signs.

Thousands upon thousands of hand painted signs for those unmemorable (and sometimes memorable) things for sale. Or, in the case of the Thanksgiving Turkeys that drew long lines of hopeful people happy to stand for hours to get their hands on a free bird... 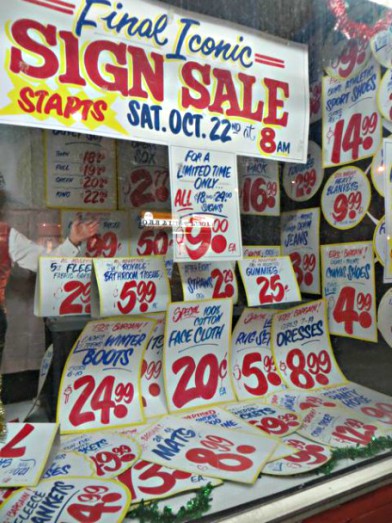 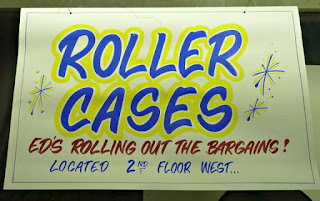 Ed enjoyed a good pun, and the store - outside and inside - was full of them 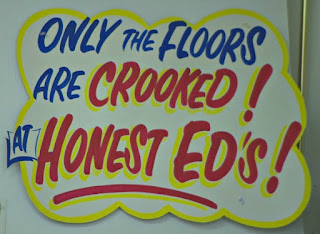 and yes, the floor did have a definite slope to it!

But, now it is finally time to turn off the lights and say goodbye 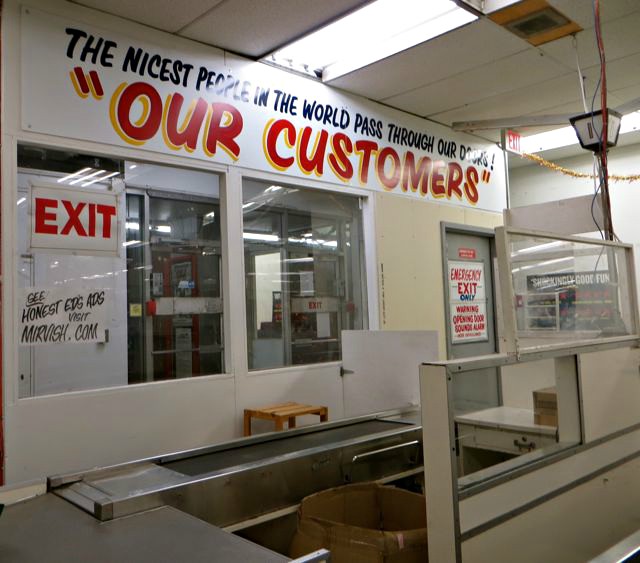 In 1992 a series of International Santa Claus, or "Christmas Personages" was issued. These were all designed by Stephanie Power.
I couldn't find any explanation for why these particular countries were chosen, but we have the domestic rate stamp with Estonia, the US rate stamp with Italy, and the overseas rate stamp with Germany.

Estonia's "Jõuluvana" is clothed in a brown sheepskin coat and matching hat, hand-knitted mittens and a walking staff. Imported from German legend, he carries a bag of presents for good children and uses his stick on the naughty.
Based on an illustration by Anita Kunz

"La Belfana" of Italy, is a benevolent witch-like woman who rides a broomstick on the eve of Epiphany, January 5, carrying presents for the deserving and charcoal for the erring. After leaving small gifts and consuming snacks left for her, she sweeps the floors with her broom. Italy also enjoys a second gift-giver, Babbo Natale, a Santa figure similar to ours who brings larger or more expensive gifts on Christmas Eve.
Based on an illustration by Jamie Bennett

Germany's "Weihnachtsmann" is a thin, stooped, heavily laden, white-bearded old man who makes his rounds on Christmas Eve with his sack of presents and a Christmas tree. He is a secularized version of Saint Nicholas, who is still associated with December 6.

fly on over to Sunday Stamps II for more Christmassy themed stamps
Posted by VioletSky 7 comments:

The western part of Canada is where our majestic mountains lie.
And within those  mountain ranges are several National Parks.
This series of stamps from from 1979 to 1986. 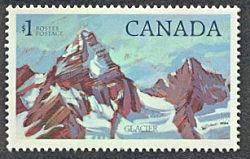 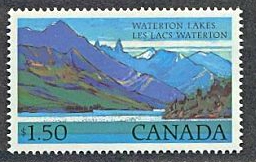 find more mountains for climbing up, skiing down or simply admiring from a safe distance, at Sunday Stamps II