At the Cathedral Cemetery in St Boniface is the grave site of the Lagimodière family - Jean-Baptiste and his wife Marie-Anne Gaboury. 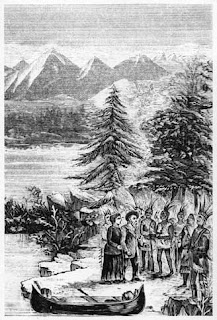 Jean-Baptiste was born in 1778 and would become a voyageur in the fur trade. He and Marie-Anne married in 1805 and moved to the Red River Settlement where he was a hunter and trapper and frequently acted as messenger for the Hudson's Bay Company. They had 11 children, one of whom, Julie, would marry one of their neighbours, Louis Riel Sr. In 1844, she gave birth to Louis, who would grow up to be a celebrated and controversial Metis leader.
Marie-Anne Gaboury (born 1780) was known not only as the grandmother of Louis Riel, but also as grandmother of the Red River. Many Metis can trace their ancestry back to her. From a life in domestic service to the parish priest, she and her new husband embarked on an arduous journey through Quebec, Manitoba, North Dakota and the Northwest. She was said to be the first white woman to live in western Canada. The semi-nomadic life with other French Canadian fur traders and their native wives would have been challenging and dangerous yet she lived to an impressive 95 years of age.

If it is going to snow in winter, then one must learn to enjoy it,
preferably starting at a young age. 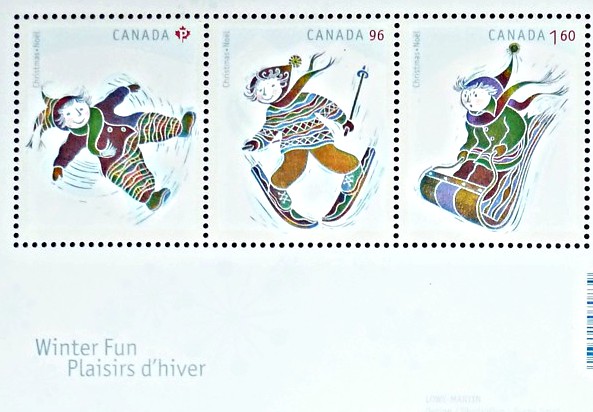 "To bring this traditional subject to life, we turned to traditional methods," designer Susan Scott explains. "The illustration process began with drawings that were later transferred onto lino blocks. The images were then carved out of the blocks and printed onto textured paper. Finally, the prints were filled in by hand with coloured pencils."
Once you're past the snow angel stage and you've learned how to ski 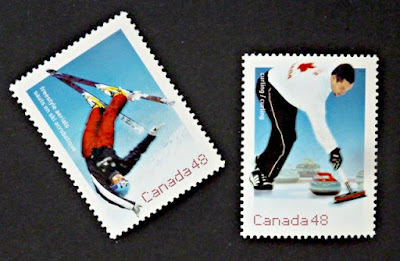 you might be tempted to defy gravity and try freestyle aerial skiing.
Aerial ramps as high as four metres allow for jumps at angles of up to 70 degrees, dropping from a height of 9 to 12 metres.
or stay indoors and gravitate to curling - a very popular sport in Canada. (not to brag, but both the men's and women's teams have won a medal in every Olympic Games since 1998)

There are four players on a team: the Lead, the Second, and the Third (Vice Skip). The Fourth (Skip), is the captain, who directs the game and calls the shots. Curling is played on a constantly groomed ice surface, and the object of the game is to accumulate points by finishing with your stone or stones closer to the button (or centre) than your opponents.
These stamps are from 2002 for the Winter Olympics in Salt Lake City.  Not sure why they don't have the Olympic logo, but they do show the official team uniforms. Personally, the fun colours of the children's clothing is more to my taste and I wish we saw more of it in winter. Those colours were "inspired by Christmas decorations and conventional greeting cards"
find some more fun in the snow at Sunday Stamps II
Posted by VioletSky 8 comments: 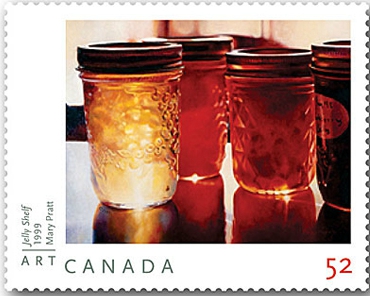 Sometimes, a work of art just leaves you speechless, in awe.
Mary Pratt's paintings do that to me.
I've been trying to write a description of why this is a favourite stamp, but am almost at a loss for words. I would obviously make a dreadful art critic.
This was part of the Art Canada series and issued in 2007.
A couple of years ago there was an exhibition of her art at the McMichael Gallery and I went back several times just to gaze at her paintings of domestic scenes and especially food, and wonder at the luminous light and feel as if I could reach out and touch the actual jars and smell the jelly inside.


To achieve the effect of her photorealism pieces, such as "Jelly Shelf" shown in this Canada Post stamp issue, Pratt carefully eliminates any traces of brushstrokes through a painstaking process that involves using small sable brushes and painting cross-hatched strokes with a mix of turpentine and Liquin. Like other New Realist artists, she often works from slides.
Her subject matter, however, remains uniquely hers and is heavily focused on things found in the kitchen of her home in St. John's, Newfoundland and Labrador. When asked by Canada Post whether she thought that she'd transformed the images of the domestic sphere into the subjects of serious art, Pratt replied: "They are serious art, the things women handle every day-the fruit, the jars, the jelly. [...] My role seems to have been to make people see things that are around them all the time that they never noticed before... to help them find the beauty of the simple things. I think that, in the past, people have not given enough weight to the images that women see. We have to eat. Food is important."
see other tiny pieces of art on stamps on this first Sunday Stamps of 2017