swinging on a moon 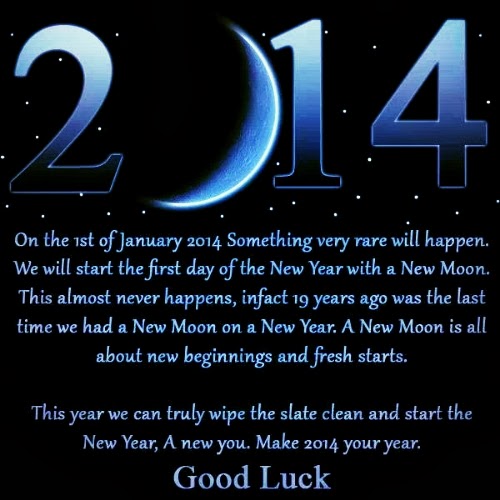 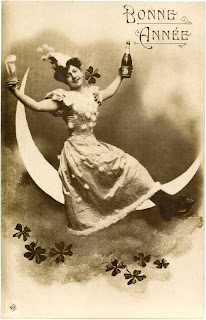 to everyone, a blessed and fun filled new year
Posted by VioletSky 5 comments:

It's funny how you can walk past a place for years and not really see it. I wonder how long this 'mural' has been on the side of Joe Dog's, a popular bar on the main street of my town. In the 16 years I've lived here, I've never once been there. They have a large patio out front on the street, but there is also (I now know) a tiki bar and patio along the side between the two buildings. A patio with a view! I think they should cover the narrow space in heavy duty plastic and have space heaters so that on milder winter days patrons can sit outside. I don't know why they can do that in New York but not here. 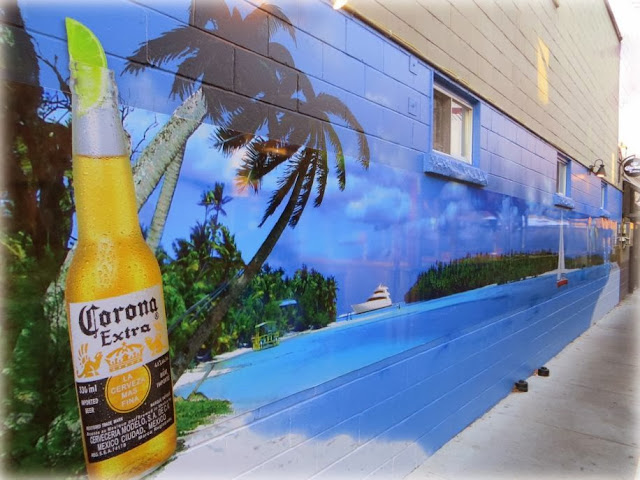 Don't you wish you were on a beach like this for real?

see more flights of fantasy at Monday Mural
this may not be technically a mural, but it tries.
Posted by VioletSky 11 comments:

Labels: beer, murals, where I live

There is no Sunday Stamps this week, but as I can't sleep....
I thought I'd share these delightful stamps of gingerbread houses that I was thrilled to get this week.

I looked up the story behind these stamps and from the USPS website I found that there are two other gingerbread houses stamps (featuring red and blue doors!) 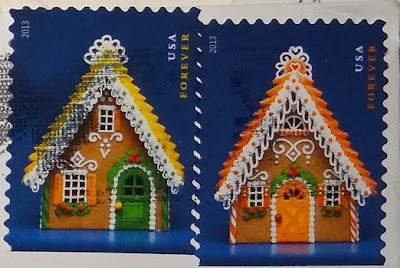 'These stamps feature four different gingerbread houses set against a bright blue background. Made with gingerbread and royal icing, each house has sugary fruit slices for shingles, peppermint sticks for support beams, and round, candy-coated chocolate for doorknobs and holly berries, and yet each is unique.'

I didn't grow up with the tradition of making gingerbread  houses and was an adult before I even knew this was something to be done.  I guess the cookies were enough for my mother to handle. Anyway, I was never really fond of gingerbread. or icing. or candied fruit. or peppermint. I probably would have just eaten the Smarties and been happy with that.
A few years ago, I was in Rochester and stumbled on a gingerbread house display at the Eastman House. I have searched and searched for my photos from that trip and cannot find them. The houses were magnificent as I recall (you'll just have to take my word for that). There is a bakery near me that makes hundreds of these houses every Christmas and I often wander in just to look at them. I quite like gingerbread now that I am older. I don't really want a house to eat, but I do want those other two stamps.
Posted by VioletSky 7 comments:

hotels in the city

There has been a destructive ice storm in the Greater Toronto Area that has left tens of thousands of people without power - still, after six days. It is a massive undertaking to get the hydro lines back up, and the trees that pulled them down sorted, and the electricity turned on. I heard from one media source that it is almost 2 hours per home in some cases. The daily fresh snowfalls, the winds  and frozen tree limbs aren't helping.

For PostcardFriendshipFriday here are a few of the historically iconic hotels in the area where people may - or may not - be able to find a warm bed. Although, in reality, only three of these are still functioning as hotels. 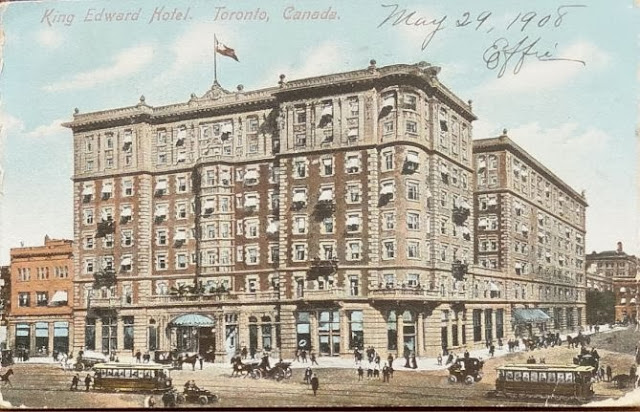 First up, the "King Eddy" located on King St just east of Yonge St. It opened in 1903 with 400 rooms and 300 baths and claimed to be entirely fireproof (probably a rare thing in those days) It is possibly the best place in the city for High Tea. 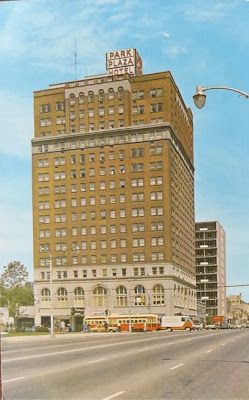 The art deco Park Plaza is located in Yorkville and wasn't opened until 1936 after a delay of 8 years due to the Depression. Located on the fringe of the downtown core, the rooftop patio was a favourite place to see the view over the city.
The Royal York Hotel opened in 1929. Built in the Chateau style favoured by the Canadian Pacific Railway, it is located across the street from Union Station. It was a state-of-the-art hotel when it was built, with ten elevators, a radio in each of its 1,048 rooms, and a private shower or bath in each room. 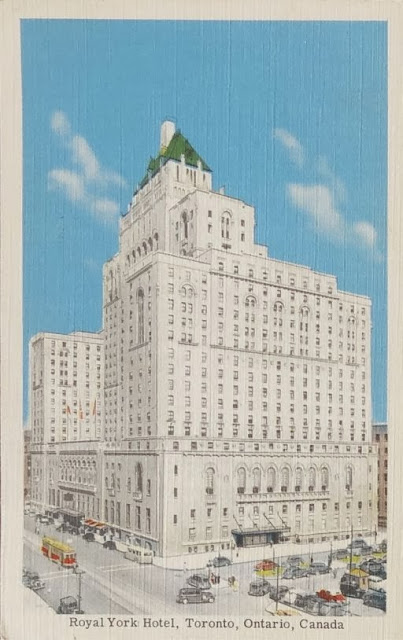 For decades it was the most visible building on the Toronto skyline and even now, people of a certain age lament that "you can't even see the Royal York" for all the new condos going up. 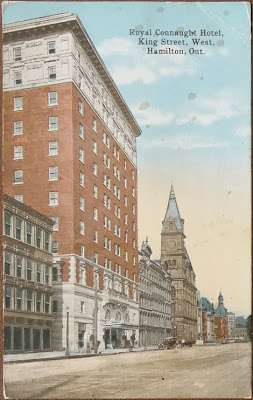 Over in Hamilton, The Royal Connaught Hotel is an Edwardian gem built in 1916. At 13 storeys, it was the tallest building in Hamilton and the rooftop restaurant provided "breathtaking views over Lake Ontario and the Niagara Escarpment". It was closed in 2004, but is currently undergoing a transformation as a ... condominium!
Posted by VioletSky 5 comments: 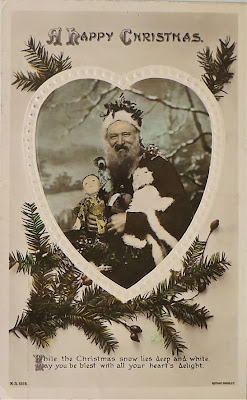 
I'm really not sure what to make of this odd photo postcard showing a vaguely Father Christmas-ish (or Phil Robertson) looking gentleman with fir boughs on his head, holding a doll dressed in what looks like a Chinese or Japanese dress and a ... white, long-legged dog?

This is from the Rotary Photographic Postcard Series

but then, you read the message on the back, sent to a Miss Williamson in Hastings, Ontario. 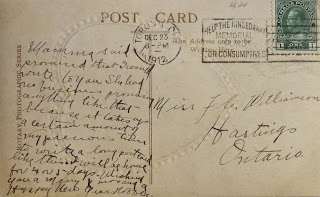 Mamma said she promised that I would write to you. She had no business promising anything like that because it takes a certain amount of my precious time to write a long postcard like this. I will be home for 4 or 5 days. Wishing you a Merry Xmas and Happy New Year.  Robbie

Let's hope Robbie and Miss Williamson shared a history and a sense of humour!

All of us at PostcardFriendshipFriday share things in common.
Posted by VioletSky 12 comments: 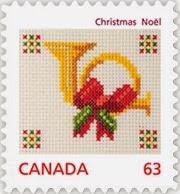 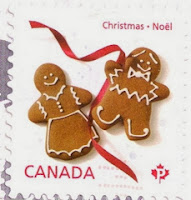 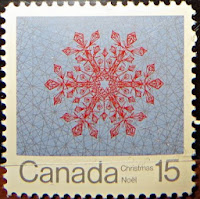 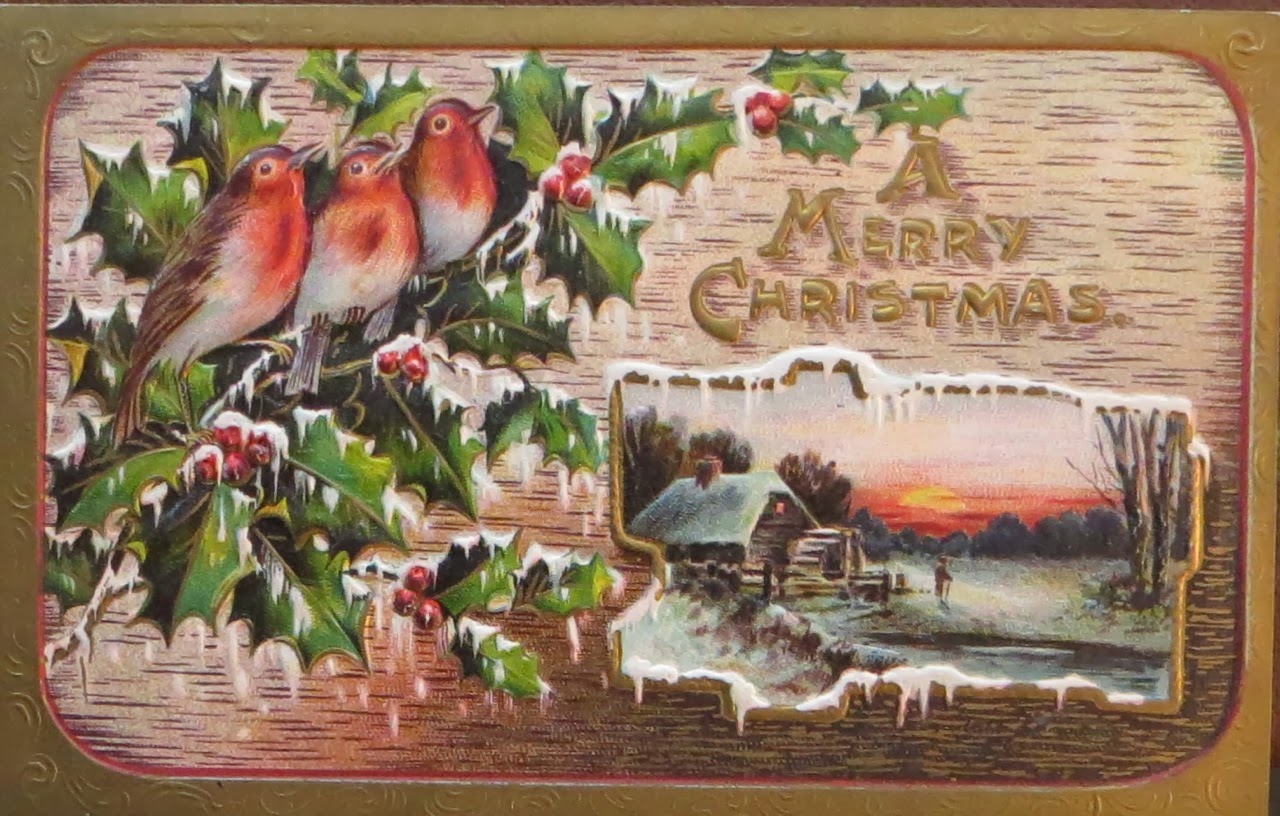 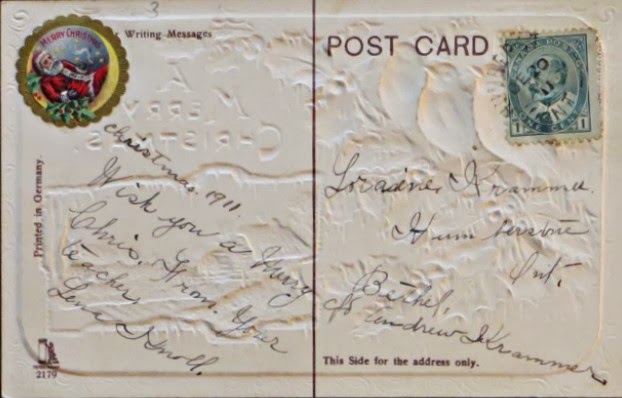 These are among my favourite stamps
they are charming in an old world way, yet are not dated by their colours or style. 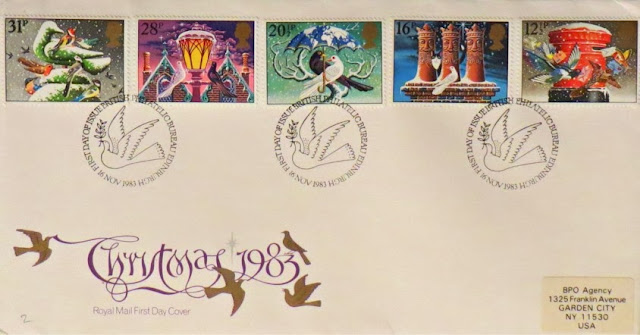 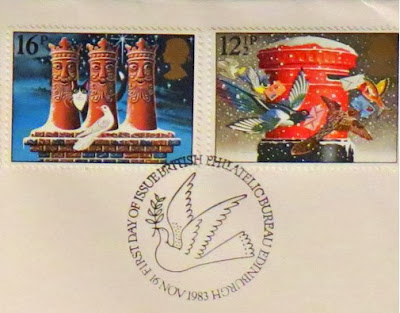 It can be hard to tell just how large or small a stamp actually is from a photo on a screen. 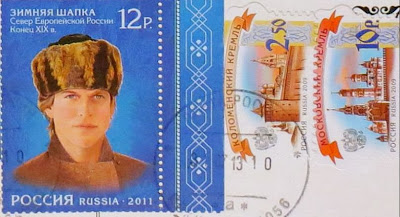 (Personally, I think the Kremlins could have benefited from being just a bit larger)
I didn't find much description on the Russian postal website other than 'girl in head band' and 'man in winter hat'.