Cobourg's Heritage District has these unique street signs featuring a sailboat with gulls and an image of the cupola from the Victoria Hall. 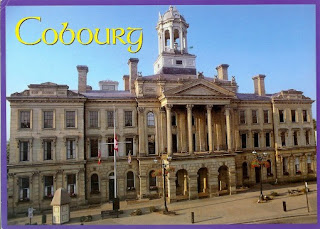 nearing the end of the alphabet with this 20th edition of the street signs series
for signs,signs 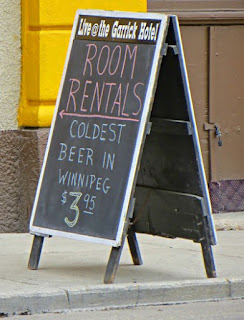 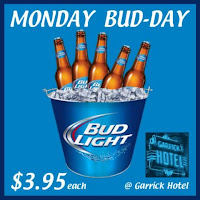 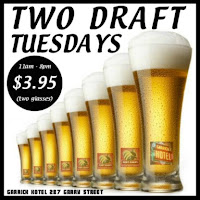 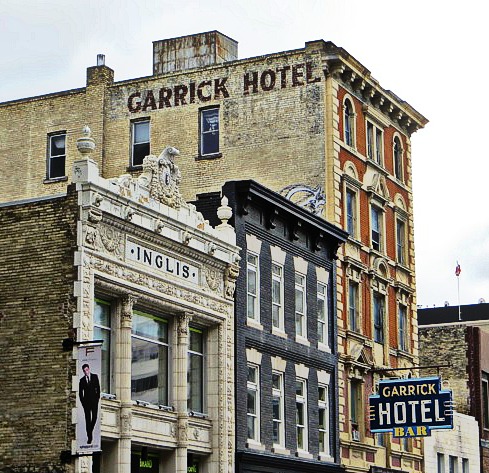 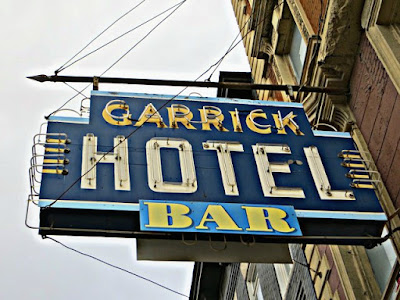 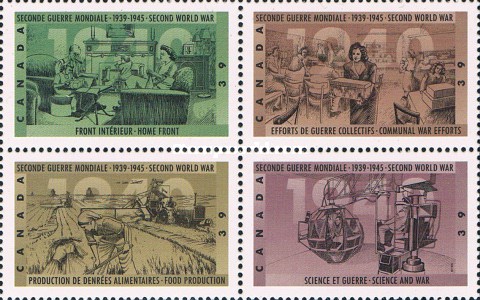 This set of four stamps was issued in 1990 to celebrate Canada's contribution to the war effort during WWII showing realistic scenes and focusing on the effects of war on people
The whole series ran from 1989-1995. Pierre-Yves Pelletier designed these stamps with the help of illustrations by Jean-Pierre Armanville.

Clockwise from top left, the first stamp reflects the hardships endured by people who stayed on the Home Front followed by the Communal War Efforts where the "many communal activities, organizations and programs that were created boosted the morale and provided assistance to troops, prisoners of war and their families".

"Through research, inventions and innovations, scientists and medical doctors made significant technological developments, which helped to win the war" for Science and War. And finally, Canada's important contribution in Food Production helped feed the Allied nations.

The details are a bit hard to see unless you can enlarge the stamp, which I have done here for you with this one from the Canada Post Archives. 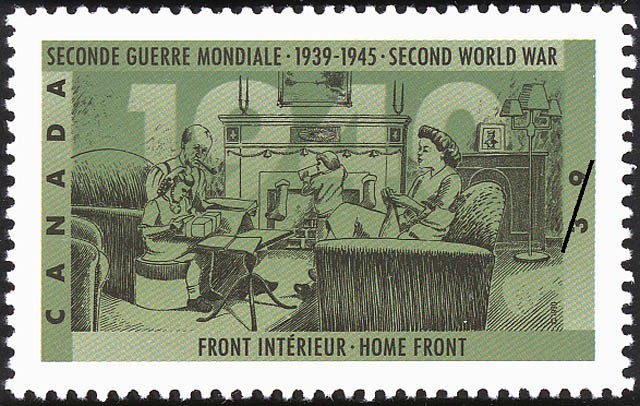 Mother may be knitting socks for the troops, while one child is hanging stockings which may or may not have an orange in the toe. Another child is perhaps wrapping a present in old newspaper after Grandfather has finished reading the latest updates.

It is a distinctive characteristic in Quebec that many streets are named for saints. These are not only for specific saints, but may also recall the names of community founders or leaders, missionaries or priests. 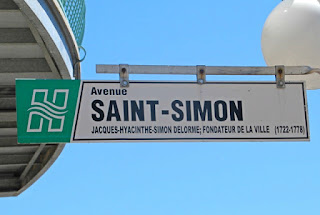 In this case, the city of Saint-Hyacinthe (named for St Hyacinthe of Krakow)  features the street name of Saint-Simon, after the founder of the city –Jacques-Hyacinthe-Simon Delorme.  These signs downtown all very helpfully list who the street is named for. Although, the sign here gives his birthdate as 1722 whereas all other sources say 1720.
Jacques-Simon – also known as Hyacinthe – Delorme was born in Quebec City and trained as a carpenter. By 1745 he was in the naval service of Louis XV building platforms, carriages and artillery works necessary for cannon installations. This was lucrative enough for him to buy the seigneury (manorial land tenure) which was to become Saint-Hyacinthe. 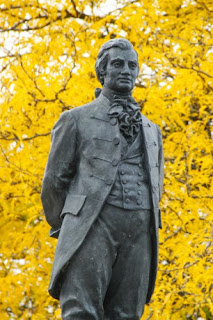 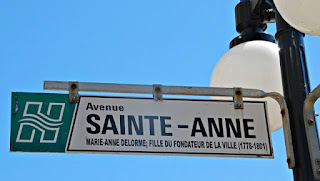 Here there is also a slight discrepancy, as it seems he had three children, a daughter Marie-Anne who was born and died in 1776 and another daughter Anne-Marie who was born in 1779 and lived until 1801. Since our Simon died in 1778... it is possible he never knew this daughter or, of course, the date could be wrong.

There was also a son, named Hyacinthe-Marie.

The H on the sign would be for Hyacinthe, with the squiggle in the middle of the H for the Yamaska River which bisects the city.

19th in this irregular series of interesting street signs for signs, signs
Posted by VioletSky 7 comments:

polar bears in a park

These polar bears are now more than 10 years old, and showing signs of their age. 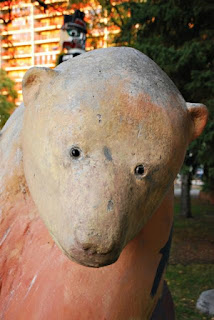 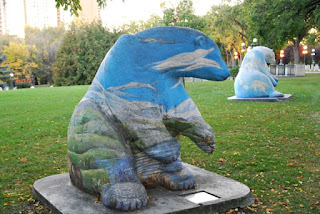 They hang out on the grounds of the Manitoba Legislature and were enjoying the late evening sun when I stumbled upon them. 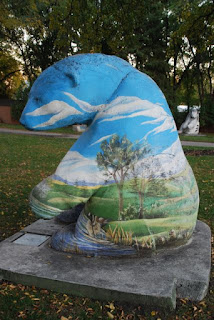 All of them were missing their name plates.


But, although faded, and a bit dirty, you could still get an idea of their design 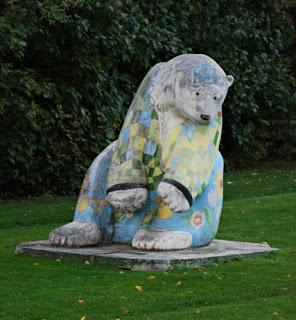 At one time, they were part of a fundraising display for CancerCare.
62 of these 7 foot, 8,000 pound concrete bears were each sponsored by a corporation who was matched with an artist. They were then on display here and along the tree lined median of Broadway, thus the name Bears on Broadway (link where you can see pictures and names of all the bears)

The bears looked a little sad, I thought, in spite of their artistic, colourful coats. 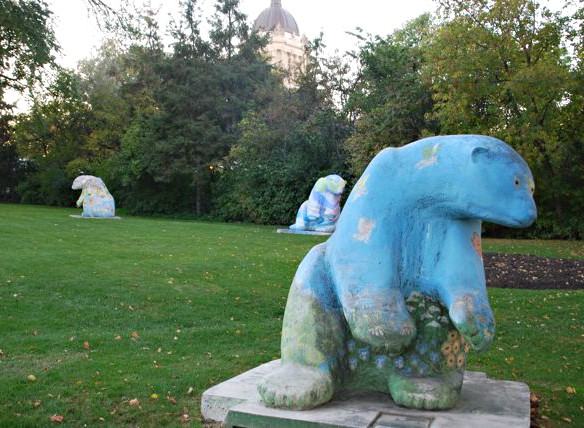 This one I could guess was called Loony Bear 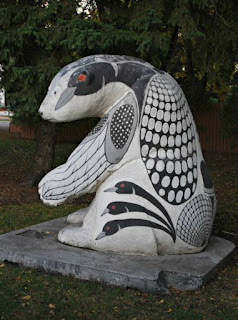 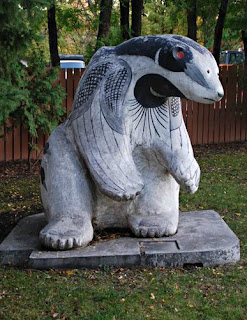 and these two are known as Nanookshuk 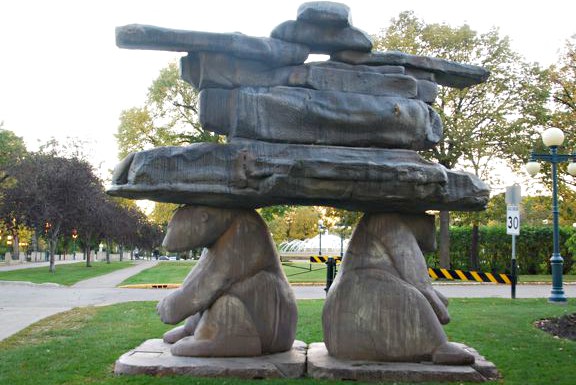 combining two Inuit words - Nanook for polar bear and Inukshuk, a directional guide for a safe journey made of stacking stones.
The other bears have made a journey to various parks and gardens around Winnipeg.
I'm sharing this short journey with Jo for Monday Walks 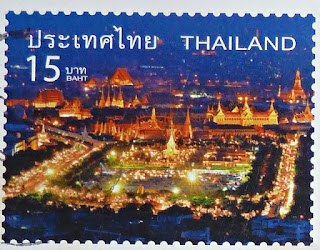 and for more illuminating stamps check out the other links at Sunday Stamps
Posted by VioletSky 9 comments:

These street signs can be found in Paisley, Ontario.
Ross St runs parallel to the main street (Queen St) and at this intersection, near the barn, you can find the Farmer's Market held every Saturday morning from Victoria Day to Thanksgiving. 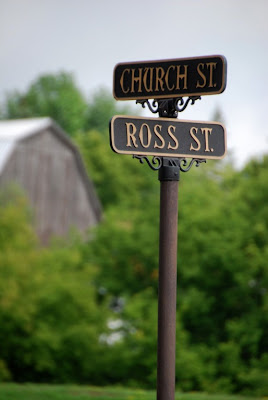 I rather liked the signs even if they are bit dark 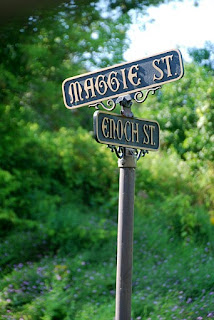 until I tried to read another pair of signs.
The fancy script was a bit hard to decipher, especially if you weren't familiar with the town.

But then, I saw this, one block over 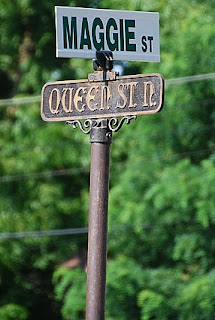 and felt a little sad for this end of Maggie St.

something fancy for signs, signs
Posted by VioletSky 22 comments:

Labels: street signs
Newer Posts Older Posts Home
Subscribe to: Posts (Atom)
Lately, this blog seems to be all about postcards, stamps and dead people and where they now reside. Sometimes I throw in an adventure story.