I was a little disappointed in the Floral Clock at Niagara this year. 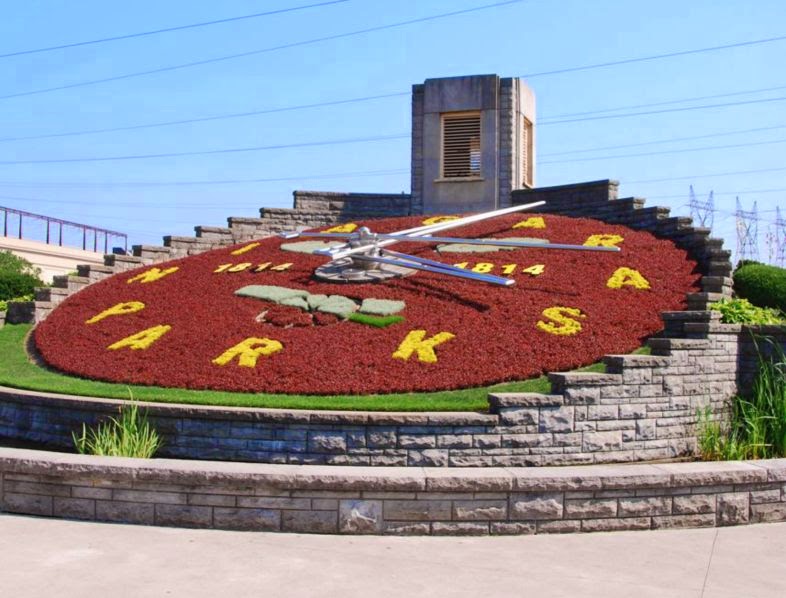 It has a different design every year and this time it's not nearly as colourful as some years past. Although, it is nice to see the Niagara Parks in flowers. 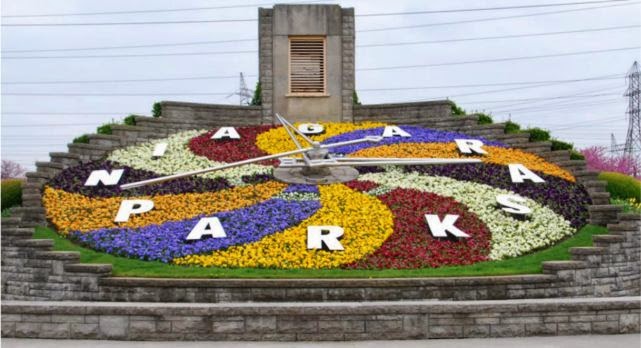 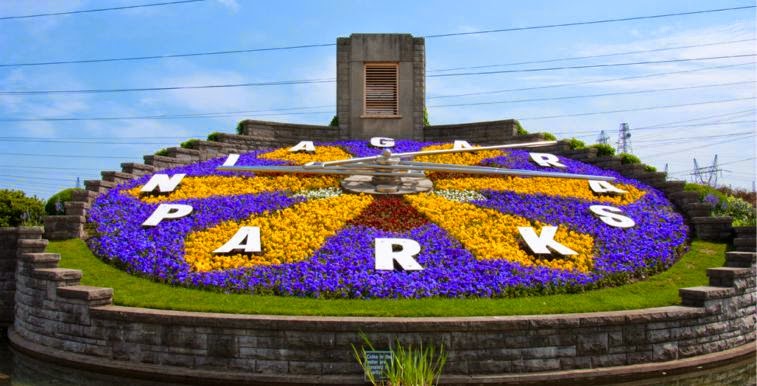 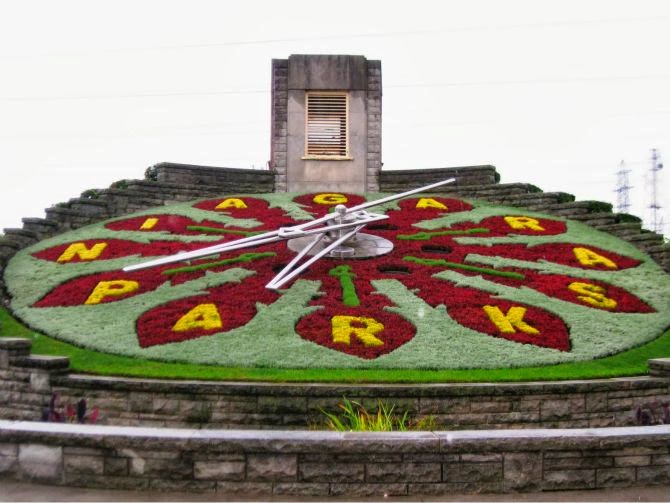 see how good I was at getting photos without random tourists posing in front of it. wasn't easy, let me tell you!

a little something for signs, signs
Posted by VioletSky 14 comments:

It was the alphabet that first drew my attention to these gravestones. I'd never seen those letters before, though I recognized the name as being Armenian. A quick search and I now know that the Armenians have their own unique alphabet writing system that was invented in 405 AD. 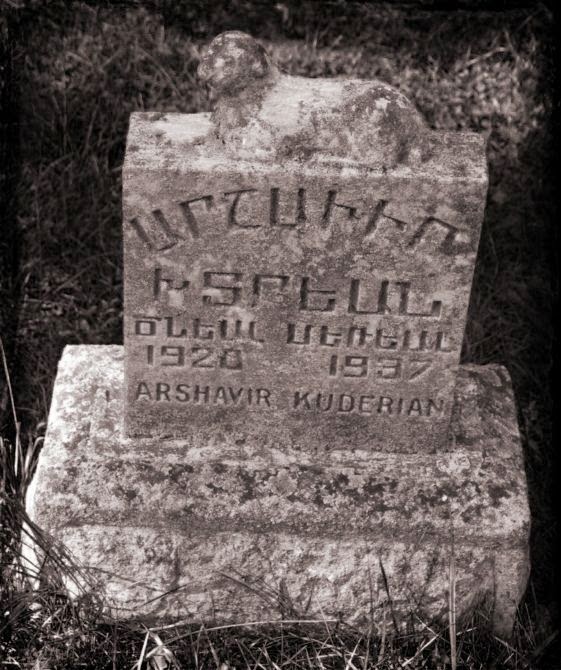 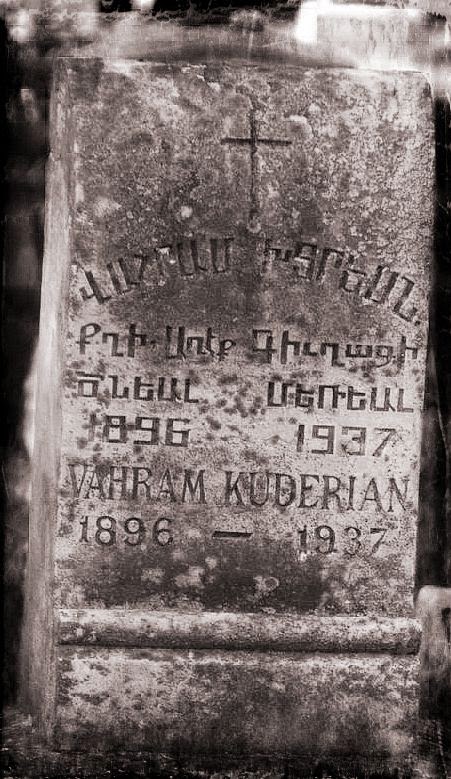 I couldn't find any information on Vahram and Arshavir Kuderian. No idea how long they were in Canada before their deaths. Were they brothers? Father and son? Are there other family? And, most curiously, did they die at the same time?
Posted by VioletSky 10 comments:

The Commonwealth Games are going on now in Glasgow and I found a couple of stamps with that theme. 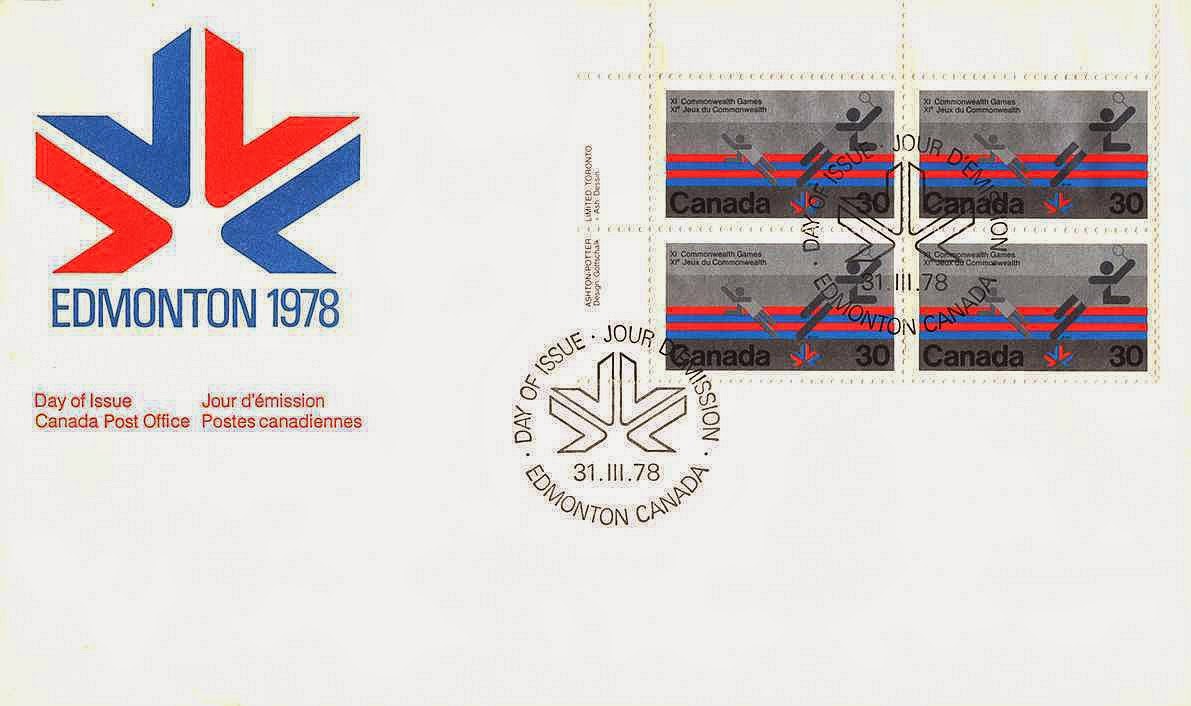 In the 1970s, this style of pictogram was popular. I'm not particularly enamoured of these, to be honest 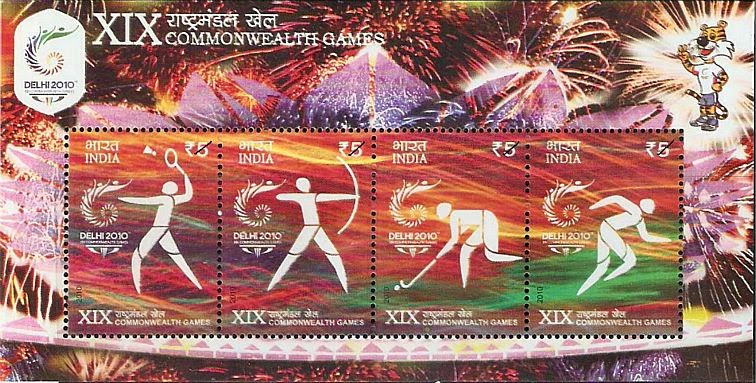 though, these pictograms from India are a slight improvement. they seem to show a little more fluidity 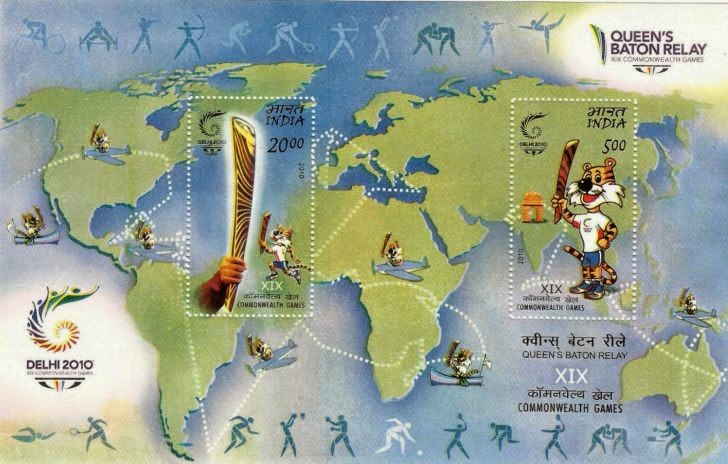 this mini sheet is perhaps my favourite - more pictograms,
but also a map, a baton and a cute tiger!
SundayStamps
Posted by VioletSky 9 comments: 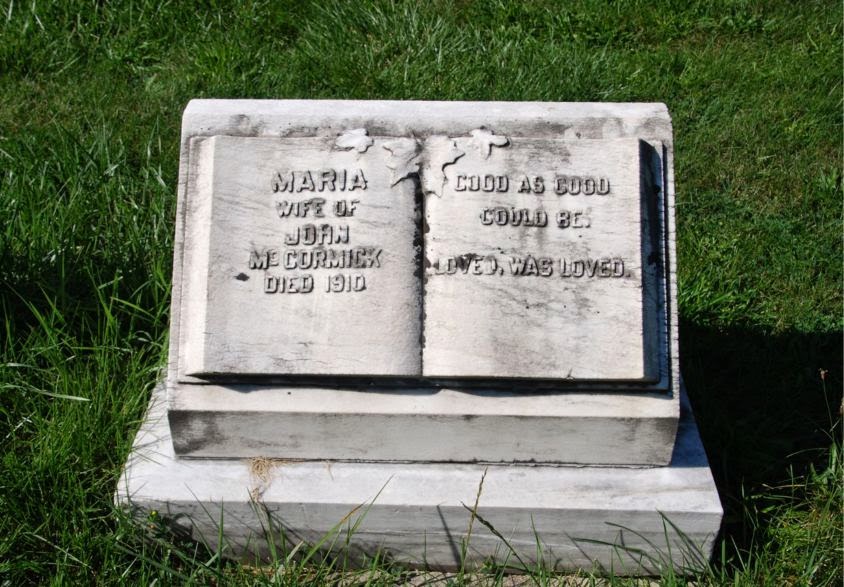 We have no idea how old Maria, wife of John, was when she died. We also don't know where John, husband of Maria, is buried, or when he died. Maria was laid to rest in Woodland Cemetery in Guelph. And she was "as good as good could be and loved and was loved". Maybe that's all we need to know.
Posted by VioletSky 7 comments:

While at the stamp fair yesterday, I found these stamps and had to buy them. I'd not remembered seeing them before, but they were issued in 1995 and I wasn't sending out much mail during the mid 90s.

So, for Sunday Stamps (and for LGS, who was hoping for some Canadian landscapes with last week's post which I disappointed...) here are three artists from The Group of Seven showing landscapes of Northern Ontario. 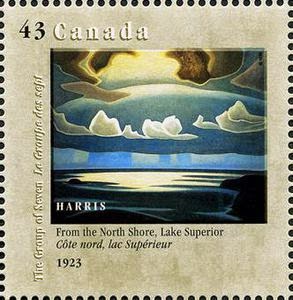 'From the North Shore, Lake Superior'
by Lawren Harris, 1923 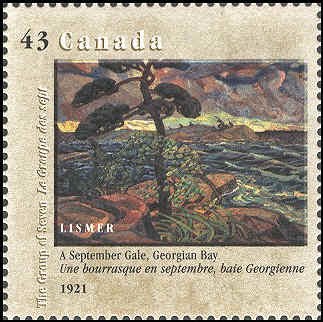 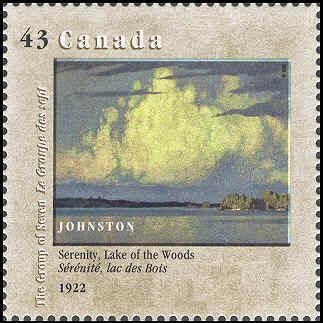 These stamps featuring the actual paintings are much prettier than the 'Centennial' series that for some reason don't even mention the artist, though for anyone familiar they would be instantly recognizable. As a comparison here are some examples

The Solemn Land by J.E.H. Macdonald

The Jack Pine by Tom Thomson

The Greenland Mountains by Lawren Harris


(So, I guess it's actually five of seven after my edit)
Posted by VioletSky 13 comments:

It has been awhile since I last posted any cemetery pictures. I've not lost interest, but the momentum waned a bit. Maybe because the Taphophile Tragics group fell by the wayside. It was fun to have a large group of people with a like minded interest visiting and sharing and commenting. Some of those posts took hours to put together, and it was a little deflating towards the end to think that maybe no-one else cared. (I freely admit that many posts are done for others to enjoy and I like the feedback. Some people post purely out of their own pleasure, not me.) But, I also see from the stats that many people look up specific grave posts for whatever reason, and that makes me happy.
Next month I have a holiday planned. It will start off like this:
work the night before I leave, head to airport in the early afternoon (11/4 hrs), arrive on the other side of the ocean at 8am, pick up luggage, go through customs, drive to cousin's house (11/4 hrs), go back to Glasgow (1/2hr) to the Necropolis for a 2pm walking tour, back to cousin's in time to watch the new Dr Who (my cousin's husband actually knows Peter Capaldi!), sleep, then off to a family reunion about noonish. I'm not sure which I will enjoy more, or how much of anything from the first weekend I'll be able to take in, but I am looking forward to seeing another cemetery in a different country. I promise to share some of what I learn.

In the meantime, here is a stone I found at the Trinity Church on the Hamilton Mountain back in April. Late April - remember how we had no leaves then?! 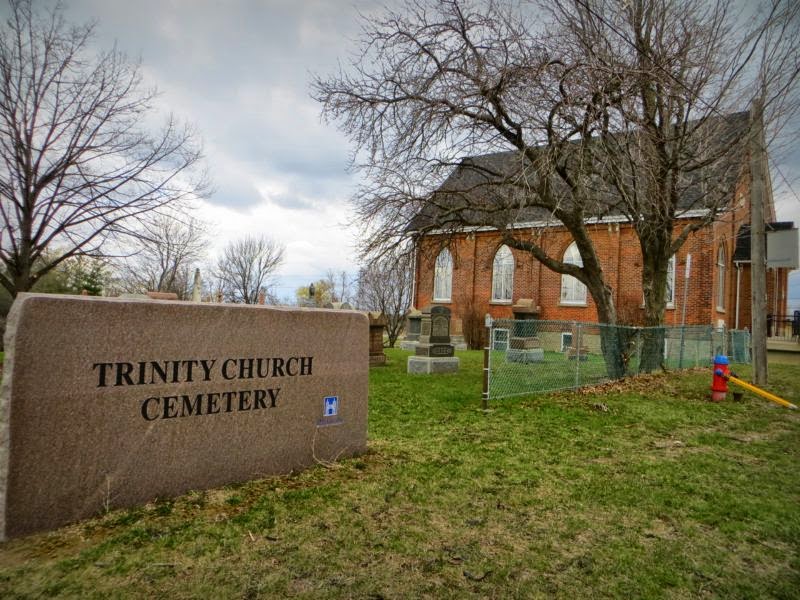 This one for the Ralston - Smith Family. I'm not sure how the name changed from the Ralstons to the Smiths, or of the relationship between all these people, but after the first name, Peter Ralston (1854-1924) and his wife Alma Ralston (1856-1939), all the others listed are under SMITH. I have a feeling this was a close family. I thought, at first, that Garfield Smith was still alive at 100, but when I enlarged the photo I noticed a very faint Apr 1988. On the other side is listed Garfield and Frances' son and daughter-in-law. 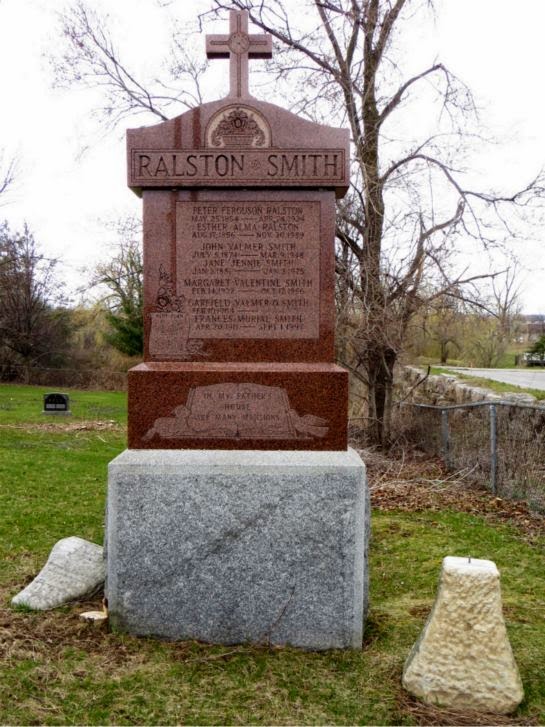 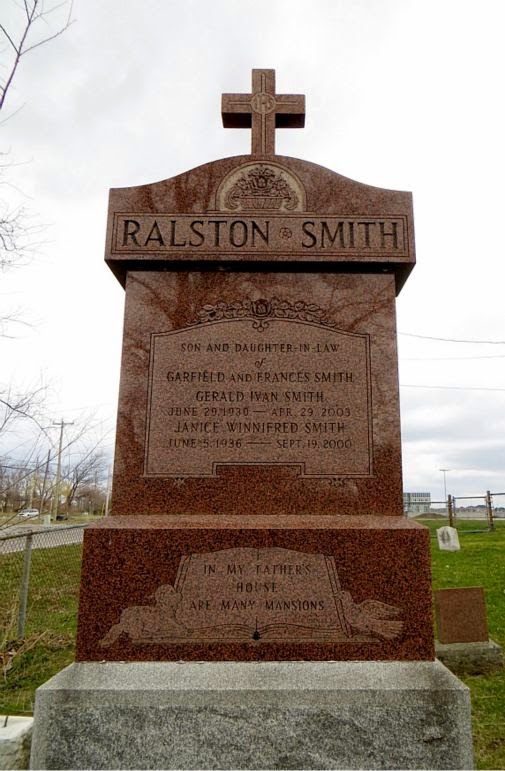 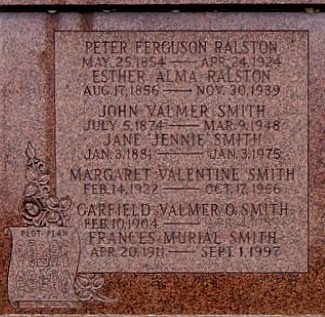 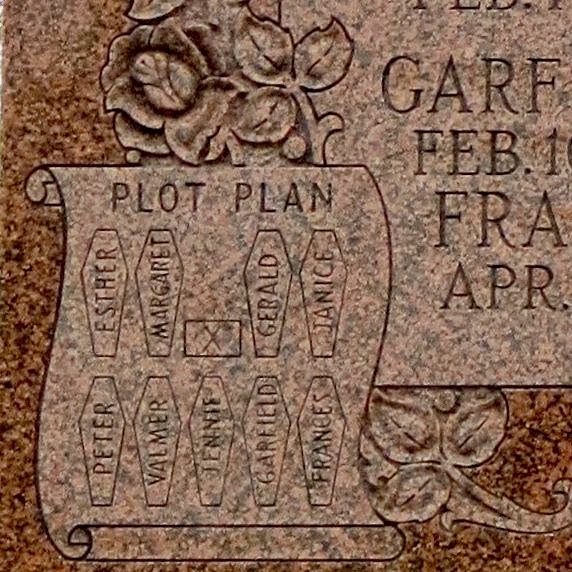 What I really liked, was the addition of the plot plan on the stone.

For some reason I found this theme to be a bit of a challenge, so I'm really interested to see what the rest of you have found. I saw many landscapes, but the theme of the stamps was often something else and the landscape was incidental. (I know, I could interpret the theme broadly...)My profile states that I prefer mountains over beaches, and these mountains and rolling hills would set my heart a-flutter were I to find myself somewhere in the vicinity. 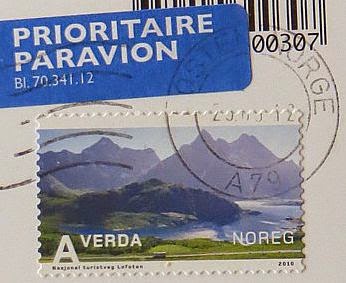 Norway provided a nice scenic view for their 2010 theme of tourist stamps, this one of the tourist route Lofoten.  Now that I think about it, I might have shown this one already, but you're getting a second chance in case you missed it. or forgot about it.

And over in Lithuania, their 2012 Europa stamp for the theme of visit and a 2009 stamp for preserve the polar regions and glaciers.  Not sure where either of these are, specifically. 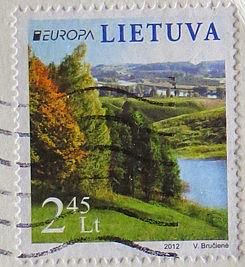 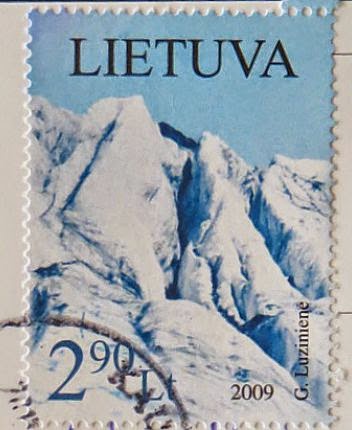 But, further south Germany issued a stamp in 2013 of the Berchtesgaden Alps located in Bavaria and Salzburg 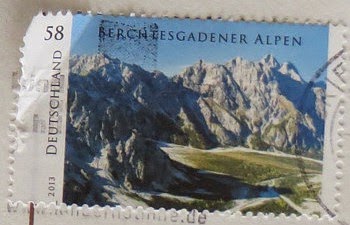 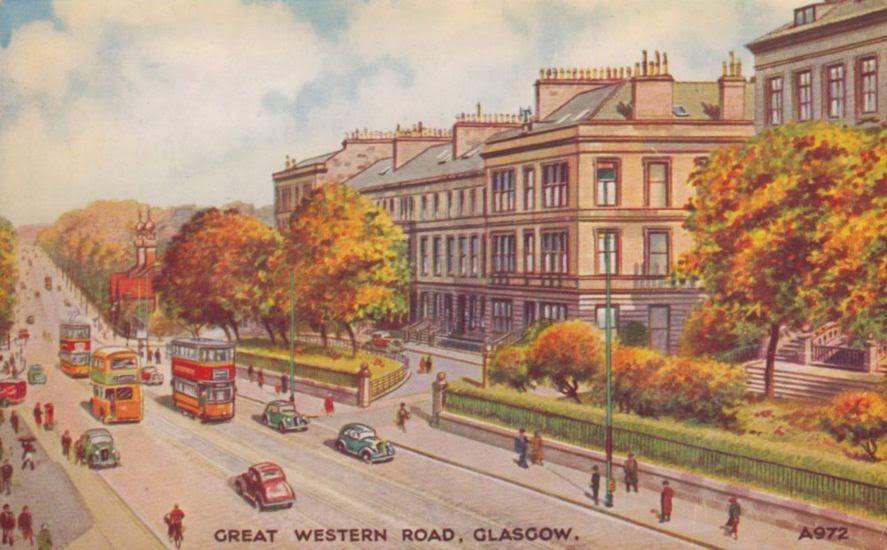 I don't have many vintage postcards of Glasgow, which I intend to remedy soon.
This is one of the Great Western Road ( a street name that I've always loved - an address that sounds as if you have arrived!) There is a lovely site here that shows the views, past and present, of this stretch of road in the west end of Glasgow.
And in six weeks I will be back in this home of my maternal family.

My parents weren't exactly good on researching before any family vacation. And when I say 'parents' I mean my father who owned the car, did all the driving and made all the decisions.
So, when I was about ten, a Triptik was ordered from CAA and we did the first half of the cross country tour and headed out west (the following year we went down east). What I remember most of that trip was the unending heat, in a car with no air conditioning.

And arriving in Calgary on the first weekend of the Stampede. 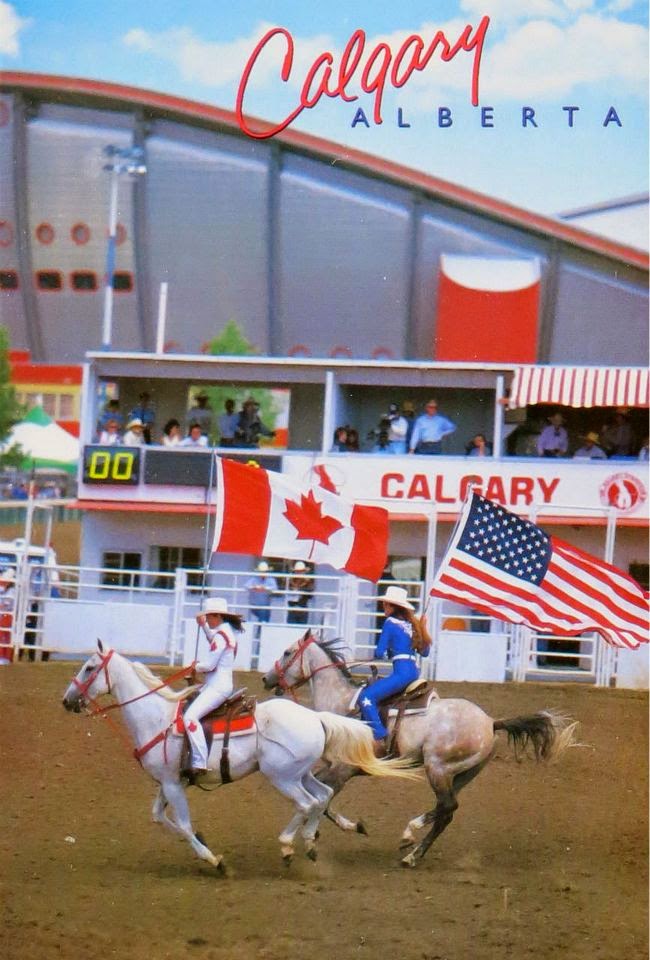 Somehow we managed to find a campground where we could park the trailer, though it took an awful lot of driving in circles and not asking for directions from my father and pleadings from my mother.
In the end, we drove into Calgary to see the 'sights' and find a restaurant. The place was almost deserted. Probably everyone was at Stampede Park. For some reason that has always been beyond me, my father was never interested in such fun cultural events. Since he 'owned the car and drove the car', seeing anything of the Stampede was not much of an option. The next day we hightailed it out of there to Banff.

The Calgary Stampede has been a tradition of one of the world's greatest outdoor rodeos for 102 years and today was the opening day parade.

Happy 4th of July to my American friends

What do you do when you can't sleep
(or are otherwise not engaged in any meaningful work for a few hours)
and there's no World Cup soccer to watch?

Well, I found a live webcam of
white tailed eagles on Mull, Scotland

at the moment it is raining, but there is still lots of activity. it is oddly compelling viewing.


You can also see previous videos of this family here where it has been recently reported that the chick was found to have been pushed out of his nest by a rival.   He was safely returned by Forestry rangers - with the help of the webcam.
Posted by VioletSky No comments:

Labels: for no particular reason

My camera took 147 pictures of the fireworks tonight.
Pure coincidence!
I played around with the settings, held the camera up and pressed the button.
Anyway, I was under no illusions that any would turn out, but some of them are rather cool. 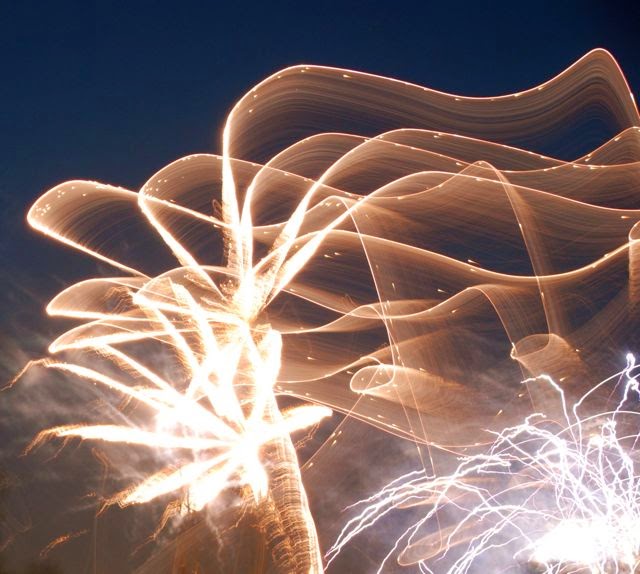 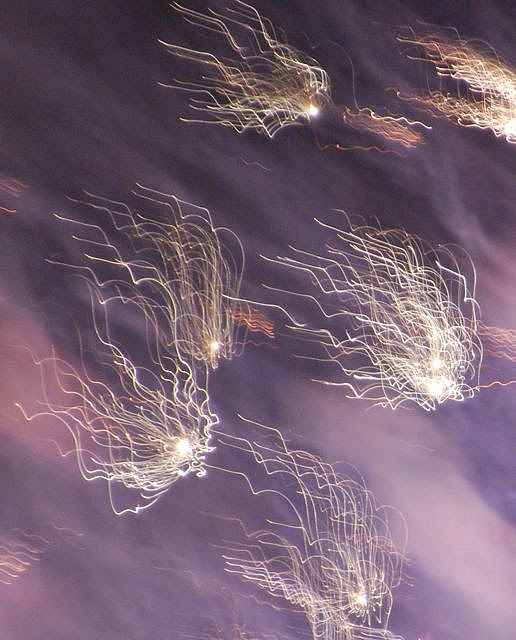 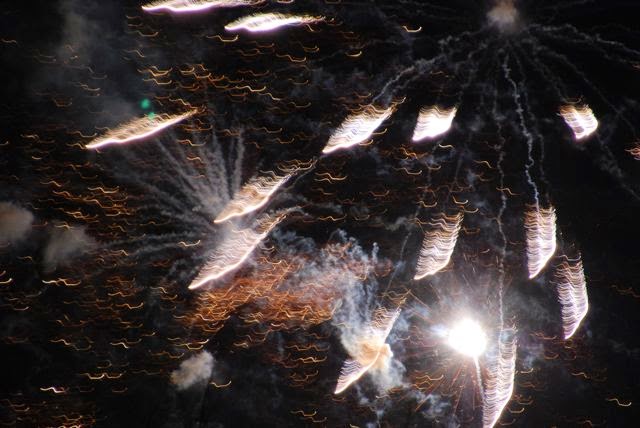 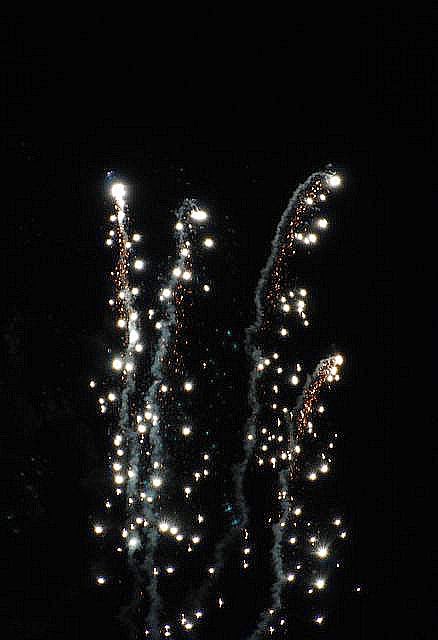 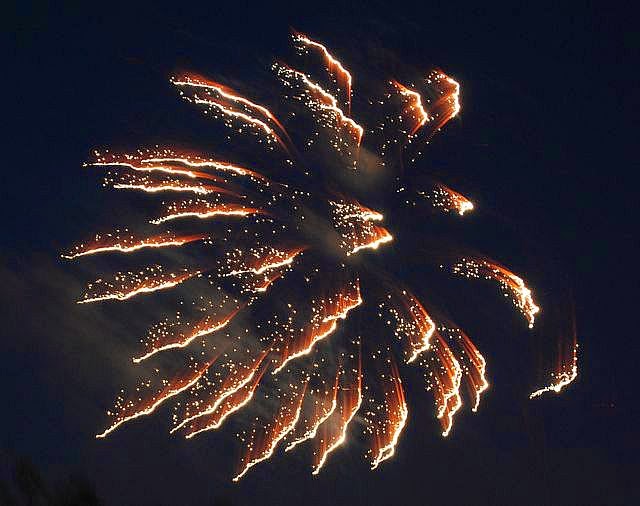 Labels: fireworks, view from my backyard balcony
Newer Posts Older Posts Home
Subscribe to: Posts (Atom)
Lately, this blog seems to be all about postcards, stamps and dead people and where they now reside. Sometimes I throw in an adventure story.