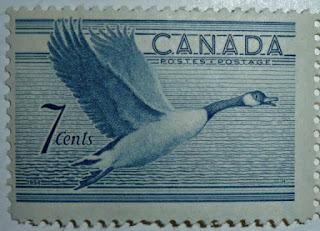 First issued in 1952, this Canada Goose flying over water (possibly a Great Lake) on its way to the USA.  The airborne goose design was meant to suggest that it be used for air mail. 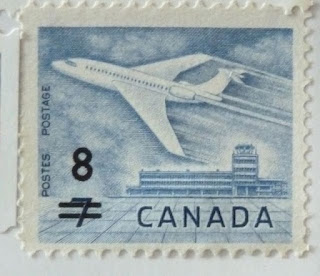 After 163,000,000 flights over 12 years, the blue goose was retired and replaced by this new jet. The aircraft is a composite of short and long range jets and doesn't represent any specific model. The airport buildings used the new Ottawa International Airport Terminal at Uplands which opened in 1960 as a model.
The air mail rate to the States was 7 cents until July 1964 when it was increased to 8 cents. The 7 cent stamp was issued in March and in July the new rate increased was announced, so the remainder were overprinted until stock ran out and a new (identical) stamp for 8 cents was issued in November.

fly on over to Sunday Stamps for more flights of fancy 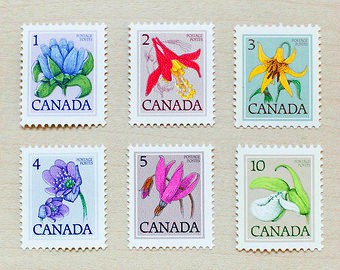 all were designed by Heather Cooper
first up, the 1¢ on far left is the Bottle Gentian (Gentiana andrewsii), a perennial herb that grows from one to two feet high. It is a rare flower and only found in damp meadows in Quebec, Ontario and Manitoba.

the 2¢ is an Western Columbine (Aquilegia formosa) is found in western Alberta and British Columbia. It is also a perennial herb found in damp meadows and woodland clearings. It attracts butterflies and hummingbirds.

on the 3¢ is the Canada Lily (Lilium canadense), another damp meadow lover that blooms in eastern Canada. It usually grows between two and five feet high and can have up to twenty flowers.

on the bottom row, we have the 4¢ Hepatica (Hepatica acutiloba), sometimes known as the liverleaf, because it was once thought to be useful for healing liver ailments. It is fond of limy soil from the Maritimes to Manitoba.

the 5¢ shows a Shooting Star (Dodecatheon hendersonii) which grows from five to eighteen inches tall in woods, mountains and prairies in western Canada.

and, finally there is the Sparrow's Egg Lady's Slipper (Cypripedium passerinum) on the 10¢ stamp. This is one of the few orchids that blooms in the Arctic and can be found from Quebec to Yukon.