In 1996, there was a series of zodiac stamps issued in Poland
by artist Maciej Jedrysik. 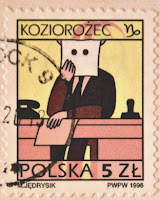 You can see more of his work at his website here. When I first came across this stamp, I had no idea what it was about. I still don't.  Googling koziorozec told me that it was Polish for 'capricorn'. In Poland, they use their own language for the signs of the zodiac, whereas in English we use the Latin names.
The stamp image still made no sense. You can barely see the horns of the goat peeking behind the piece of paper. What does a man sitting at a desk holding up a sheet of paper with eye holes have to do with goats or Capricorns?
It seems I am not alone in being confused. 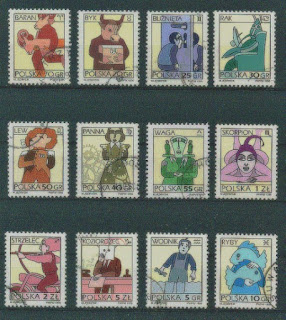 There are quite a few threads on several forums asking for clarification about this stamp, with no luck. Some of the others in the series, while still playful, are more recognizable as you can see in this set (courtesy of Erik Berndt flickr).  Aquarius, for instance is called 'waterman' (Wodnik) in Polish, and therefore shows a plumber. Aries (Baran) is using a 'battering ram'. Virgo (Panna) shows a maiden - but what is with the gears?
I'm sure many Poles found this series amusing, but for the rest of us it seems to be just confounding. 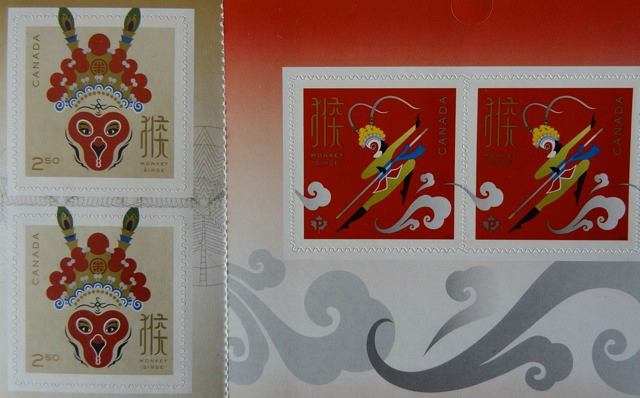 This year's version of the Year of the Monkey stamps were designed by Albert Ng and Linna Xu. The domestic stamp 'depicts a golden figure that is vibrant and alive against a rich red background that provides a stark and striking contrast, while the international-rate stamp features a stylized Monkey King mask with red and gold accents'.
The stamps were inspired by the legend of the Monkey King, also known as Sun Wukong, one of the main characters in the classic Chinese novel Journey to the West. The story tells of how the monkey king accompanied the monk Xuanzang on a journey to India to retrieve sacred Buddhist texts known as sutras.
For some reason there was a long delay with getting these stamps into the post offices, but finally, they are available. I think they look better when you see the actual stamps, but this design is not a favourite. It does, however, feature the colour red.
for more stamps on a theme of redness, head over to Sunday Stamps II
Posted by VioletSky 7 comments:

For illustrated stamps, you really need not look any further than the Czech Republic.  I'm not entirely certain, but it does seem like 99% of their stamps are illustrations rather than photographs.

From their lovely depictions of flowers, like this tulip from 2010
or the cyclamen from 2007, or the azalea from 2008 (all by graphic designer A Khunova) 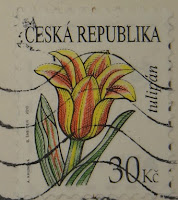 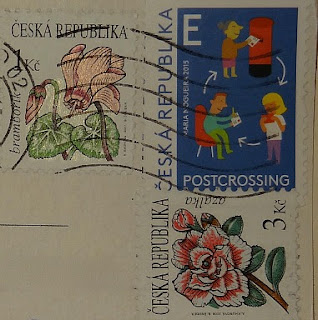 to the Postcrossing stamp designed by Maria Nogueira in 2015
to perhaps the most famous Czech artist, Alphonse (or Alfons in Czech) Mucha 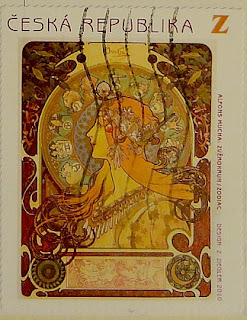 this is his 'Zodiac', which was originally designed as a calendar in 1896
to this 2014 stamp promoting Good Luck, with a dog chewing on a four leaf clover.

It was designed by Jiri Sliva and I really have no idea why the attached bit on the left is of a dog tied to a lamp while reading a book. But - and I did not know this - if you find a four leaf clover and you are wanting to find a mate (husband) an unmarried woman is supposed to eat it and the first unmarried man she sees afterwards will be her true love.

more countries from around the world have illustrated stamps, find some at Sunday Stamps II
Posted by VioletSky 10 comments: