television is on hold for the season 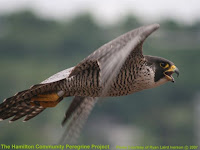 It's that time of year again. The nesting season.
The Peregrine Falcons are back. The have settled into 'their' ledge in the Sheraton Hotel in downtown Hamilton. A new and improved webcam has been set up (see link in sidebar) and as usual, I have it on most of the day watching and waiting...
Madame X is back for her ninth year and has just laid her first egg (as of 29 March)!
(Update: 2 eggs as of 31March)

Peregrine Falcons are known for site fidelity. This will be Madame X's ninth year in Hamilton and Surge's fourth, and the 15th year the same nest site on the Sheraton Hamilton Hotel has been used.
Madame X was hatched on a bridge on Pennsylvania Route 309, the Cross-Valley Expressway in Wilkes-Barre, Pennsylvania. Banded as a hatchling on 7 June 1999 she was known to the falcon watchers in Northeast PA as 'Runaround Sue', a name suggested after she was found running along the expressway guide wall one morning. We are keeping the folks in Pennsylvania posted on Madame X's progress.
Hatched and banded in Etobicoke in 2002, Surge spent at least part of the 2004-2005 seasons trying to establish a nest at the Burlington Lift Bridge. In 2006 he replaced the male at the Sheraton nest and has been in Hamilton since.
- from HCPP website

I also found a webcam (from I know not where or I'd be able to credit and thank them) of a Bald Eagle's nest somewhere in Oklahoma. A great closeup of the eagle sitting there, looking around at the world, waiting... That link is also in my sidebar. If anyone else knows of any other birdcams, you know I'm addicted to them and will add them to my favourites (and my sidebar). Because I have nothing better to do with my time. Really, I don't. The housework can wait.
Posted by VioletSky

Labels: a lovely day to be outside, shout outs, time wasters, winged creatures