my trip #2, or put the camera away now

The main point of my visit to NYC was to eat see certain exhibits at certain musea (sorry, I cannot write museums). 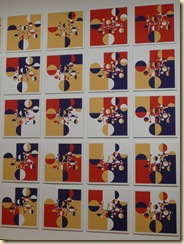 Now, galleries have a responsibility for the exhibits they put on display. The temperature and lighting are just so. The spacing is designed for maximum viewing and flow.

So it is extremely annoying to have people stand in front of displays and chat on their phones or, worse … 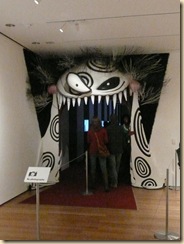 take photos. Take photos in spite of the ‘no photography’ signs you have to walk around to get into the room of the display. In spite of the signs that are on stakes at waist level, or on the floor, or where the wall meets the ceiling. In spite of, even, the security people shouting out as you enter the room: there are no photos allowed inside this area.

Now, I found a certain thrill at seeing some of these things in person. And, yes, I did take a couple of pictures where it was allowed. But in nearly every room someone tried to get away with taking pictures when they shouldn’t have used a camera or a flash. And get away with it they ultimately did. 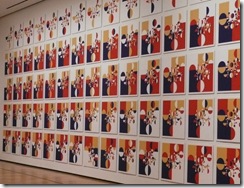 Really, though I’m pleased with this, it doesn’t even come close to conveying how it felt (or looked) to be in a huge room full of these panels. Or how it was to sit and quietly contemplate each one to see the changes in c olour combinations. Just as any blurry picture taken quickly from a camera phone would only be a disappointment; a throwaway shot if taken on film. There are books to buy that may be expensive (though the one for the Tim Burton exhibit was not) or post cards that all have perfect photos if you need a souvenir. Or, here’s an idea – look it up on the internet where almost any image can be found.

So, to the woman at the Silk Road exhibit at the Hayden Planetarium, who took pictures of pretty much every display despite several warnings from the security guard – 6 times she was told to put her camera away – what possible reason could you have for such behaviour? Why should you not have been asked to leave and had your photos deleted by the guard? Now, that would be a good response to such blatant misbehaving. Just as you might have had your film ripped out of the camera if you ignored the warnings or took a picture of something considered ‘secure’.

That day may come again. Maybe the guards would like to have a little more disciplinary power, instead of just repeating themselves all day. 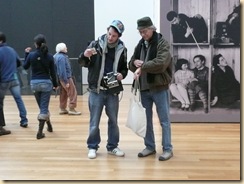 I liked these guys who were using a Polaroid facsimile type camera.