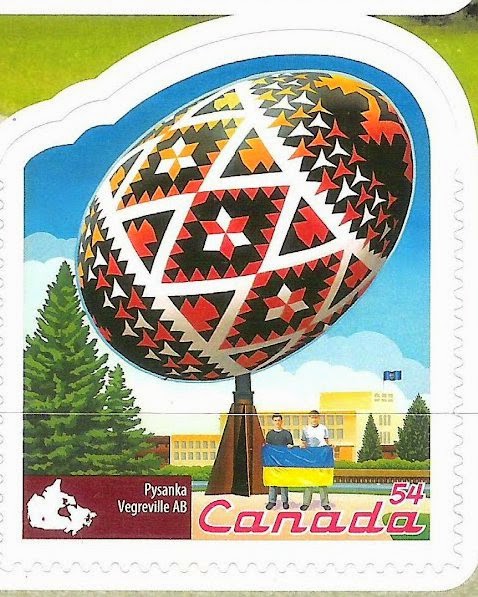 This was issued in 2009 as part of the Roadside Attractions series, so not eggsactly an Easter stamp, but it is a giant easter egg, or Pysanka, celebrating Ukrainian heritage in Vegreville Alberta. The stamp was designed by Fraser Ross and illustrated by Bonnie Ross.
It is the largest Ukrainian Easter Egg in the world. And in the fairly small, unassuming, town of Vegreville, about 60 miles or 100 kms east of Edmonton.  This Pysanka symbolizes the harmony, vitality and culture of the community and is dedicated as a tribute to the 100th Anniversary of the Royal Canadian mounted Police who brought peace and security to the area's pioneers and their descendants. The Alberta Century Celebrations Committee would give funds to communities that wished to build a monument to the RCMP.
For those who like numbers....
The Pysanka is really an immense jigsaw puzzle containing 524 star pattern, 2,208 equilateral triangles, 3, 512 visible facets, 6, 879 nuts and bolts and 177 internal struts. The Pysanka is recognized around the world as not only a unique artistic masterpiece but also an achievement of nine mathematical, architectural and engineering firsts, plus being the first computer modelling of an egg - remember this was in 1973!

Paul Sembaliuk, an authority on traditional Easter egg design, used three colors - bronze, silver and gold - to symbolize prosperity. Bronze is the predominant colour of the design and suggests the "good earth", the land on which our forefathers struggled for survival and existence.
Five distinct symbols make up the design. The radiating gold stars on the end sections symbolize Life and Good Fortune. The three-pointed stars, in alternating gold and silver, symbolize the Trinity, representing the strong devotion to the faith of our ancestors. The band of silver circumscribing the Pysanka, with no beginning or end, symbolizes Eternity.
On the central barrel section, gold and silver windmills with six vanes and points symbolize a Rich Harvest. The most prominent motif of the design - the silver wolf's teeth which point to the centre from the silver band - symbolize the main message of protection and security afforded our pioneers by the Royal Canadian Mounted Police.


It measures 25.7' wide and stands 31' high. and what I didn't know was this thing is like a giant weather-vane: it spins!
below is a video of the Pysanka on a windy day
Posted by VioletSky