EUROPA stamps have been issued since 1956
According to the website, these stamps represent cooperation amongst postal operators and promote philately. They exist to build awareness of the common roots, culture, and history of Europe and its common goals. 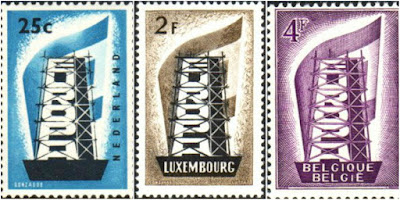 the original six countries of Netherlands, Luxembourg, Belgium, Germany, France and Italy
with the first EUROPA stamps. Each stamp has a tower of the EUROPA letters surrounded by scaffolding, the theme being 'building Europe'. 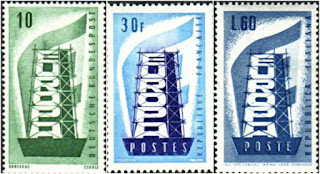 designed by Daniel Gonzague from France. 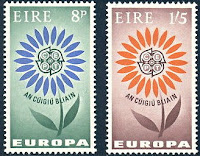 By 1964, there were 22 members, which are represented by the 22 petals of this flower
designed by another Frenchman, this time George Betemps
A common design was used for the stamps until 1974, when a common theme was introduced. In 2017, the theme is castles. In 2018 it is bridges, and in 2019 there will be my favourite theme - birds.

see  more common, or not so common, stamps on the theme of the letter E  at Sunday Stamps II