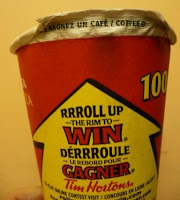 It is Roll Up The Rim time at Tim Hortons!

And after only 3 coffees bought,
I WON!
A coffee.
But still,
I WON something!
Every year from the last week in February until whenever the special cups run out in April, you get a chance to "roll up the rim" of your medium, large or extra large coffee cup and see if you've won a coffee, or donut, or money, or gift card, or laptop, or a 2009 Toyota Venza - oh, I'm breathless with anticipation. I am actually quite happy with the coffee and food. Since I've never won anything more than that, I keep my expectations low. In the coming few days, there will be calculations in the media of your chances of winning each of the prizes depending on which province you live in - and they will vary wildly.
~~~~~~
Three years ago there was an infamous case of two school girls who found an unrolled cup in the garbage. The one who found it, couldn't get the rim rolled up but her friend was successful. They were surprised to see that it was a winning cup for the SUV. The parents got involved and a court case ensued over who actually won the prize - the finder or the roller-upper. Then, the school janitor claimed that it was his cup that was thrown out before he rolled up the rim and that HE should get the RAV4. DNA testing was requested to prove it was his. Eventually, after much debating and media scrutiny and derision and arguing ... Tim Hortons decided to get involved afterall and awarded the car to the family of the girl who found the cup. It was at least an interesting diversion for a few months.

Labels: coffee cups, I don't ask for much, news, sometimes I think sometimes I drink coffee