In the news tonight was a segment about how some people are handing out healthy snacks for 'Hallowe'en candy'. Indeed, some people aren't even handing out candy, but have stocked up on stickers and little toys instead. As someone who used to be diasppointed with those little boxes of raisins (no matter how good they actually were, they were not candy or chocolate), I say piffle. One of the highlights of this Hallowe'en Season - I was actually wished a Happy Hallowe'en twice today - are those wonderful packages of little chocolate bars. Except that those mini Mars Bars are so mini now that I end up eating six times a many as I would have normally to get my fix.
A friend of mine was all flustered over her kids' costumes - one is going out as a ladybug, another as a gingerbread man. She could have bought the suits, but decided she could make them just as easily. Well, sorry, nothing is just as easy as buying a ready made suit. Anyway, I'm sure they will be cute. Her eldest son is going as a Mad Man, specifically, Don Draper. I don't think he actually knows who Don Draper is, except that his parents keep referencing him and he gets to wear his grey ring bearer's suit from a summer wedding he was a part of. It may be his last chance to wear it, so he has been granted his wish. He has a dark blue pillow case for his loot bag and she has written Crown Royal on it in elegant gold script.
We got to talking about the costumes of our childhood (mine in the 60s, hers in the early 80s). And the tears when the wonderful costume had to be covered up with a winter coat or rain jacket against the cold and damp.
Gone are the days of putting an old bedsheet over yourself and calling yourself a ghost. Or wearing your dad's old shirt and becoming a hobo. It turns out she does not remember those decorated plastic poncho like thingies that we wore, along with the plastic masks that made your face sweat. 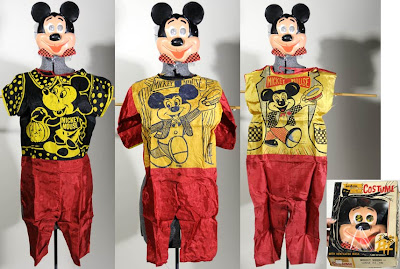 Really, those ready made costumes have come a long way, baby. 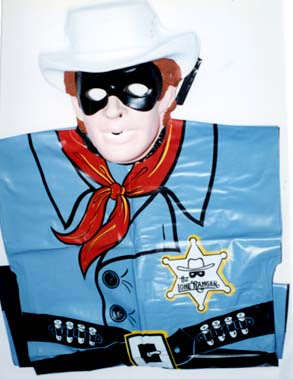 I remember going as Zorro, at least once, but I believe I just had a mask and a towel wrapped over my shoulders and a silver foil covered umbrella to brandish about as a sword. Maybe I might have had something similar to this Lone Ranger costume, but I doubt it. Surely I had nothing this cheesy? 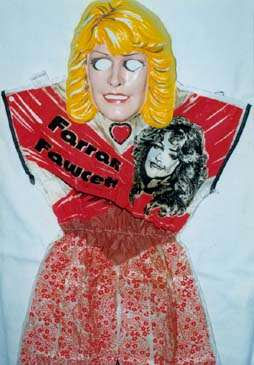 And just in case the hair wasn't enough (and yes, I did have Farrah Fawcett Hair) this dreadful depiction has a photo AND a name to let the candy giver know exactly who you were.
I don't get any trick or treaters at my door, but I do have a bowlful of candy. I even found one of those candy necklaces that were so much fun to wear to school and slowly destroy by eating piece by piece. But I won't be dressed up. Then again, will my penguin decorated flannel pajamas count? I understand it will be close to freezing on Sunday night. Hot chocolate and mini Mars bars. Yum.
Posted by VioletSky

Labels: dressing up, food, funny pics off the internet