I have been thinking of this as a piece of art. 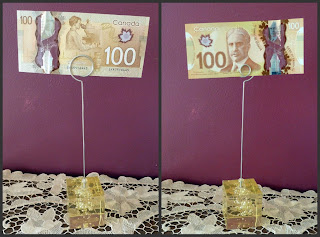 The new polymer 100 dollar bills came out last week and I managed to snag one. It is still the same buff colour as the older cotton fibre version. This time around the images are dedicated to science.
I have had fun fondling its smoothness, turning it around in the light to see all the pretty colours and the embedded pics. I have caressed Prime Minister Borden's shoulders trying to feel the raised bits (they are extremely subtle). And then there are the see through bits, which are a fun novelty.
The older bills were easy to counterfeit - at one point in the early 2000s, it was near impossible to spend one at any store as no-one would accept them.
It isn't quite true that it doesn't wrinkle. But it doesn't fold well. And it has some pretty cool waterproofing - no drops remains when you pull it out of a basin of water, dries immediately!
It is also very slippery (as a friend of mine who works in a bank testified while trying to count a bundle!)
But I doubt my wallet will ever carry more than one anyway.
Now that I have wrinkled it, I will take it back to the bank until I can afford another pristine edition.
Posted by VioletSky