So, the world as we know it has now got 7 billion people living in it.
Actually, the world as I know it is much smaller. And much less populated.
We, in my small corner of the world, complain repeatedly and wistfully, about the new developments going up and the increasing number of people who keep moving in on our patch of paradise and changing it forever.
But in reality, it is nothing compared to so many other places in the world. Places like Shenzhen, China where the population has risen from around 352,000 to 10,358,000 in the last 30 years. 10 million people have moved into that area in three decades! There is only 13 million people in all of Ontario, give or take a few thousand and though most of them live in the southern bit and many in the Golden Horseshoe where I live, it really does not feel all that crowded. Even with all the new condos going up everywhere (apparently Toronto is the king of condo builders in North America) we still have space around us and apparently "places to grow". 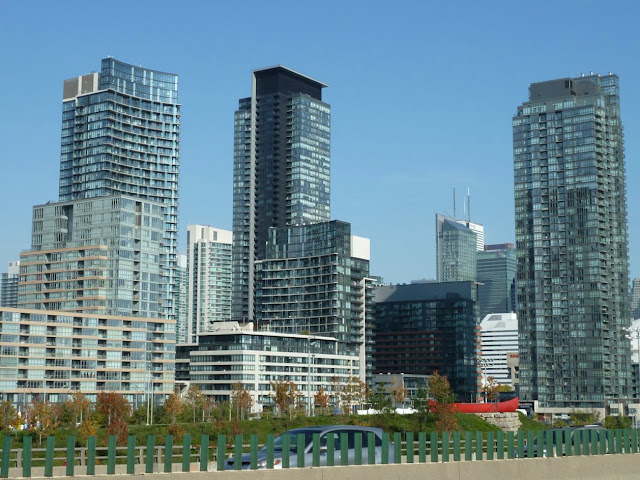 taken while stuck in traffic exiting at the single lane Spadina off ramp of the expressway into the entertainment district.
I love that Douglas Coupland canoe looking out over the Gardiner and towards the lake from where once a river flowed...
On a website, which you can find here, you can place yourself in amongst these 7 billion people inhabiting our world. According to my birthdate, I rank as the  2,913,260,663 person alive on my birthdate and the 76,452,309,015th person to have lived since history began.

Labels: at least I got one good picture, learning new stuff