make friends with an owl

Owls have been making a big rerun, much as they were back in the 1970's. Everything that could have an owl design, or owl shape is available (if you don't believe me, check out your local Winners or HomeSense, or any kitchen/home decor store).

I think they are cute and have started a modest collection of vintage and retro owls of my own. 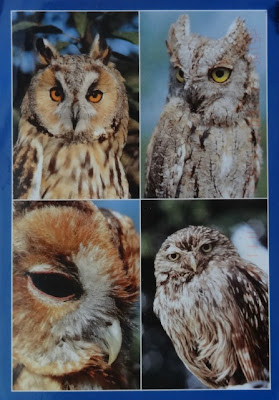 The owl came into our Hallowe'en traditions much like the bat. As a hunter of bats, owls would often be seen near the Hallowe'en bonfires searching for food as were the bats. As they flew silently through the night sky and often lived in the hollows of trees where they could not be easily seen, they had a disconcerting habit of scaring travellers. When they screeched, it filled people with apprehension and made them think something evil was about to happen. Some believed that witches could change themselves into owls where they might then drink the blood of babies. In time the screeching reminded people of the cackling of a witch.

The owl was the favorite creature of Athene, the Goddess of Wisdom. The Greeks believed the owl to be a protector, with its magical ability to see at night. To have an owl fly over an army before battle was sign of impending victory.

The Romans, however, believed the owl was a creature from the underworld and a portend of impending doom. To hear the hoot of an owl meant that there would soon be a death.

The English adopted much of their owl folklore from their Roman conquerors. For them, the owl was a sinister creature. It hunted in the night, a time closely associated with death and evil.
It's interesting that in the northernmost parts of England and in Scotland where the Roman armies did not conquer, the local inhabitants considered it good luck to see an owl.